Batman Begins had favorable reviews, and had a strong presence at the box office, so a sequel was green lit. Nobody could have predicted how good the sequel was going to be. The Dark Knight was a smash at the box office and huge critical success that surpassed all of Batman’s previous film adaptations. It was a dark, epic, philosophical blockbuster that really elevated the genre even further into new territory. This isn’t just one of the best superhero movies ever, it’s one of the best movies ever made. And after nearly eight years the film still lives up to its own hype.

It’s an impressive movie, and its scope is even larger than its predecessor. While Gotham City in Batman Begins it still kept most of the action and climaxes in small, narrow set pieces that were little corners of a larger environment. Here, the film has its most exciting and dangerous scenes in large buildings, and streets, which makes Gotham feel bigger and more like a real city. Chicago becomes a diverse Gotham with expansive, beautiful buildings that make up a downtown area and intricate little neighborhoods that stress the grimmer side of the city. Chicago looks so cool as this completely different city that feels like a real place again. 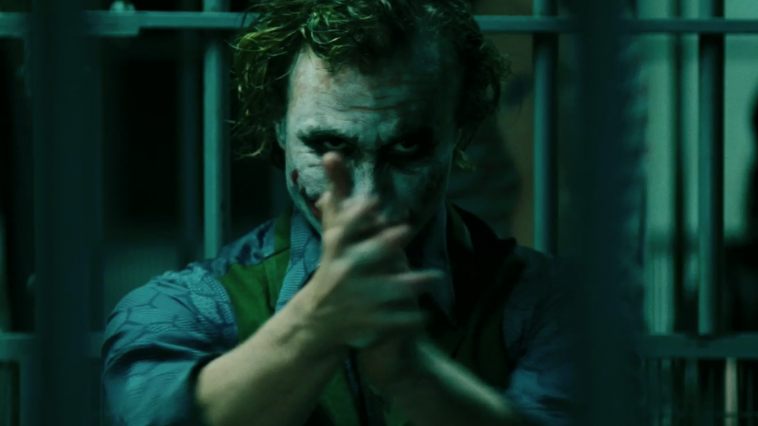 The Dark Knight’s main influence is Batman The Long Halloween specifically with the Caped Crusader’s assault against the mob, and the fall of Harvey Dent into Two-Face. There are some elemental similarities to books like The Killing Joke for the characterization of the Joker. The movie takes place right after Batman Begins, and The Dark Knight is finally able to strike a devastating blow against all the mobs in Gotham with the help of Jim Gordon and district attorney Harvey Dent. However, the mobsters decide to go to a new criminal called The Joker to kill Batman. What follows is an epic battle between order and chaos for Gotham’s sanity. The unstoppable force finally meets the immovable object, and all hell breaks loose.

It’s hard to know what else to say about this movie that hasn’t already been said for the past eight years. I remember seeing it when it came out and loving it; I considered it the greatest superhero film of all time and would physically fight people if they had anything bad to say against it. Okay, that’s a bit of an exaggeration, but the passion was real, but after many viewings I stopped watching it as consistently; when I came back to it for this review I was a tad worried that the film just wouldn’t live up to my past nostalgia for it. Luckily the film surpassed itself yet again, because the film was not afraid to go further than any superhero film before, and to this day there hasn’t been a superhero movie like it. The movie’s biggest strength was creating a complex yet engaging narrative where a character like Batman could logistically thrive in.

The film’s story is actually told in five acts as opposed to the usual three act structure most movies hold themselves to. The Dark Knight is akin to Shakespeare with its intricate plot, distinct characters, and tragic themes. It’s not just Batman’s fight against the Joker, but it’s also Batman’s crusade against the mob, Rachel Dawes’ choice between Bruce Wayne and Harvey Dent, Joker’s wish for anarchy, James Gordon’s attempts to bring order to Gotham, and of course the birth of Two-Face. This is more than a Batman film, this is a Batman tragedy. And it’s impossible to not consider this film as an important movie for superhero adaptations. You can dislike it all you want, but you cannot deny how much this movie changed the game for the genre.

Christian Bale is back as the Dark Knight, and he does a great job balancing out the sides of both Batman and Bruce Wayne. He’s also given a better suit this time around that doesn’t look so stiff and hard to maneuver in. But, the real gem in Bale’s performance is the sense of how much he has on his shoulders in this world. In every decision he makes feels important, and has consequences. Consequences that he took into account, but had to make anyway. That’s unique and hard to get across in a movie like this. But, he still has the throat cancer voice, and it’s even more distracting in this movie. Partially because he uses for every situation he was in, even in the last scene where he’s trying to talk Two-Face down. It just sounds silly again, but the rest of his performance is handled well.

All the actors coming in from Batman Begins do a great job once more. Michael Caine plays that wise grandfatherly Alfred, Gary Oldman is the tough yet worried James Gordon, and Morgan Freeman is a funny energetic Lucius Fox. Maggie Gyllenhaal replaces Katie Holmes as Rachel Dawes, and does a fair job replacing her. Aaron Eckhart’s portrayal as Harvey Dent is handled wonderfully. Instead of being outlandish and overly “Jekyll and Hyde” he plays more subtle. The choice makes his performance less bombastic, but it also makes him more disturbing. It’s impossible to know what will set him off. Since he’s so quiet, calm, and dry when he’s Harvey Dent, and even when he’s Two-Face it becomes more shocking and terrifying when he loses it on someone. It feels like they could have really used him for the next film, but The Dark Knight probably wouldn’t have worked if he lived.

However, the performance of a lifetime that steals the show is Heath Ledger’s Joker. Not only is his Joker funny, outlandish, and a ton of fun to watch, but he is terrifying. His appearance, and demeanor just captivate any audience. It’s not just the big acts of murder and mayhem, but it’s the subtle touches that makes him so fascinating. The changes in his voice, the licking of his lips, and even how he breathes is Joker incarnate. He blows Jack Nicholson out of the water, and even though Jared Leto looks like he’s going to bring something unique to the table as the Clown Prince of Crime, it’s doubtful he’ll ever be as good as Ledger. It’s a shame that he passed away, because we really lost a treasure. Seeing him embody fiction’s greatest villain is fantastic, and wonderfully terrifying.

While the film has a unique and complex story, it’s not without flaws. The long-winded overly philosophical speeches are back and they don’t really help the story at times. The characters are rarely conversational in a natural way. They all have long drawn out intricate spews of dialogue that don’t make the characters sound like real people. Now there could be an argument made that the dialogue makes the characters more Shakespearean, but since Nolan and co. were trying to go for realism it just comes off as strange. The philosophical nature is certainly interesting, but it doesn’t really serve the characters. It’s actually the other way around, and that’s when the film stops becoming a true adaptation of Batman, and more an adaptation of Batman and Philosophy. It’s not bad at all, in fact it’s amazing, but it’s not really Batman.

However, everything else about the movie is almost perfect. The epic scale is upped considerably, the action scenes are fantastic and much better than the shaky cam extravaganza in Batman Begins, and every actor just brings their best to this movie. It’s still one of the greatest movies ever made, and is definitely still worth your time. If you haven’t seen it yet, then I envy you, because I would love to watch this for the first time again. And if you have seen it (which, let’s be honest, most of you have) then watch it again. It’s definitely worth your time.

Next time “Road to Batman V Superman” finds itself at the most controversial superhero movie ever made. Get ready for the comment war of a lifetime as we examine Superman’s second attempt at a come back, Man of Steel.