Superman IV: The Quest For Peace is an interesting film. Like Batman and Robin, fans consider it as the worst Superman movie in the franchise. It had a completely different team working on it than its predecessors. But, the strangest factoid of this film, is that Christopher Reeve (Superman himself) came up with the basic story for the film. He didn’t write the script, but he outlined the basic structure of the movie, and wanted to make Superman more political. The idea of making any comic book character more political doesn’t always have the best response, but it’s an enduring idea to make it more political. The film had a tiny budget of 17 million dollars, and made significantly less than the other three movies.

There is a charm to Superman IV that is reminiscent of the previous Superman films. It’s fun to see Margot Kidder, and Gene Hackman as Lois Lane and Lex Luthor again. The chemistry they all have is a lot of fun and feels just like the original movie. Also, the Man of Steel saves a lot of people in this film, even more so than the first few films. And even though it’s really cheesy sometimes, it’s nice to see an emphasis on saving people.

The biggest issues with this movie, however are the special effects. The first three, are technical marvels, they really make you believe that Superman can fly, and it’s even more impressive to view now, considering those films came out in the late 70s, and early 80s. It’s obvious that Superman IV had such a small budget, they reuse one flying shot over and over again, the green screen effect is painfully obvious, and overall the visual effects just aren’t that interesting. There are YouTube videos with more impressive effects than this movie. But, as Michael Bay can attest, special effects don’t make a good movie. What about the story?

Well after Clark Kent saves some astronauts, talks to a Realtor about selling the farm, and deals with a Rupert Murdoch stand in buying the Daily Planet he’s greeted by shocking news. An international summit fails, and both the U.S. and the Soviet Union feel it is their obligation to be number one in the nuclear arms race. This is where the first problem of the movie comes up, the filmmakers never explain what the summit is or what it’s about. So, the reaction to make as many nuclear arms is kind of weird. There’s also the fact that international summits fail more often than they succeed, so why is everybody freaking out?

In response to this, a little boy writes a letter to Superman to try to get rid of nuclear weapons. Superman goes to the United Nations and tells the world that he will be rid of all nuclear weapons whether the governments are willing to part with them or not, and everyone just applauds his actions. Now, I could go into length explaining that no country would willingly give up their nuclear bombs. Or I could talk about how Superman’s actions would most likely cause an international incident than prevent one. Or I could question why the governments are so willing to give up their bombs to Superman, but not each other. 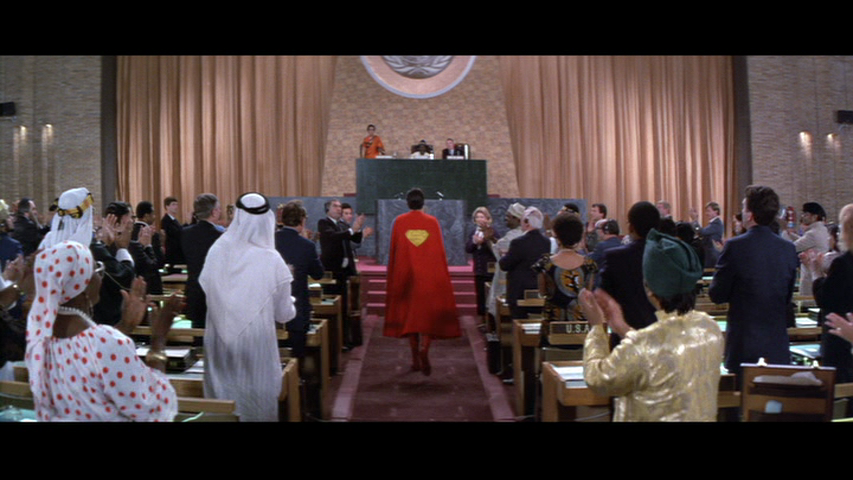 No, instead I’m going to write a list of countries that have nuclear arms. Now I want you to really think about this: if you were the leader of one of these countries, would you want Superman to come in and take away your bombs?

A lot of these countries have managed to stay out of conventional war due to the fear of nuclear fallout. I’m not saying nuclear weapons are a good thing or a bad thing, I am saying that Pakistan probably wouldn’t want Superman to show up and force them to give up their nukes!

I know I’ve gone on a pretty big tangent about this, but I wouldn’t harp on this so much, if it wasn’t the main plot point of the movie! I can buy the bizarre changes in superpowers. I can buy that nobody recognizes Clark Kent is Superman with just glasses. I can even buy that Superman can spin around the Earth fast enough to travel through time by reversing its rotation. I can believe all that, because it’s fantasy, and fantasy only needs to follow whatever rules the creators make up.

Talking about the threat of nuclear annihilation brings reality into the mix, and if you want to comment on reality through fantasy you have to do it right. There have been great stories about Superman commenting on real world events, and writers should try to have Superman reacting to real events. This film does not care about doing it right, it just uses this very real issue as a plot device to give us Nuclear Man… Which was what you all want to read about anyway, so why did I even bother with all this international crap?

Yes, Nuclear Man, the super villain created by Luthor from a lock of Superman’s hair, a nuclear warhead, and the Sun. He’s every bit as ridiculous, and goofy as you can possibly imagine. He has glam rock hair, a glam rock outfit, and glam rock retractable press-on nails. He’s also voiced by Gene Hackman, which is actually really funny, but, there’s not a lot to say about him that hasn’t been said already. He’s over the top, weird, and has a very boring ballet recital with Superman on the Moon. He’s actually not in the movie for very long, so there isn’t much to dwell on. Really, the true evil entity of Superman IV is Jon Cryer as Lex Luthor’s nephew, Lenny Luthor. He is so annoying that I could punch him in the face fifty times and wouldn’t care. There’s just something so obnoxious about his voice that drives me up the wall. He just steals the show in a bad way, and really he could have been cut from the movie and it wouldn’t have made a difference. The film, like it’s predecessor, also suffers from some really bad slapstick and comedy. Like there’s one scene where Clark Kent has to be himself and Superman at the same time for a double date with Lois and the Rupert Murdoch’s stand in’s daughter.

The comedy drags on, and doesn’t really add anything to the movie, which already feels like it didn’t need to be made. Christopher Reeve said in his autobiography that he was not pleased with the film, and went into detail about the filming process of the movie. He also supposedly pulled Jon Cryer aside during filming and said the movie was going to be terrible.

And yet, despite everything I’ve said, all the illogical issues and dumb moments this movie has, I don’t hate it. I actually don’t consider it the worst Superman movie. That honor goes to Superman III, which as I’ve said, ruined Richard Pryor, was a convoluted viewing experience, and down right boring. This movie is so bizarre, weird, goofy, and ignorant in its intentions that it’s kind of hard to hate it. It’s a movie that should not exist due to how it just seemed doomed from day one of production, but the fact that it does exist and people still put their name on it is impressive. And as I’ve said, there are good scenes of Superman being Superman, Gene Hackman is still a funny Luthor, and Margot Kidder is a great Lois Lane. And even some of the speeches are fairly well written.

Give it a watch if your curious, or need a good dose of weirdness. It’s mostly harmless, even the political stuff isn’t intentionally malicious, just unintentionally. Actually that might be worse, but I digress, this is definitely not the Superman movie I want to see, but it’s certainly a Superman movie.

Next time we jump into the 2000s with the first Christopher Nolan Batman movie, Batman Begins. Where we first heard Christian Bale’s infamous “bat-growl.”