Batman Returns is one of the strangest sequels ever made. Initially Tim Burton, the director of Batman, wasn’t that interested in directing a sequel. He stated that unless there was something new and exciting for the sequel, there wasn’t much reason for a second go round. It wasn’t until Warner Bros. granted Burton a great deal of creative control and the chance to have screen writer Daniel Waters come on to rewrite the proposed script did he come back. And while the film is similar to Burton’s first Batman film, it may be considered a little too dark and harsh for some.

While Batman ended on a triumphant and uplifting note, Batman Returns is a cold and cynical film with a bizarre sense of humor throughout. It’s as if Tim Burton was trying to emulate Edward Gorey rather than Bill Finger and Bob Kane. The tone and mood create a Gorey, Charles Addams like environment, and while it’s certainly interesting, it doesn’t really work for a film about the Dark Knight. The film brought back Michael Keaton as Batman, but besides a few other actors like Pat Hingle and Michael Gough, the cast is completely different with new characters.

The film focuses on three new villains: The Penguin played by Danny Devito, Catwoman played by Michelle Pfeiffer, and a nasty businessman named Max Shreck played by Christopher Walken. They all have their own specific agendas to conquer Gotham City or take down Batman. And much like the Joker, each actor plays their villain more over the top to contrast against Michael Keaton’s more subtle approach to the Caped Crusader. But, while it made sense for the Joker to be silly, and over the top (even though I wasn’t a huge fan of the character) it didn’t necessarily mean it was going to work for the other characters.

Some villains like the Penguin deserve a bigger than life performance. Danny Devito got a lot of flack for his performance as the Penguin (he was even nominated for a Razzie); personally I think he makes it work. I didn’t really view him as the Penguin, but rather a warped version of Richard III: disfigured, cunning, resourceful, and deliriously menacing in his actions. And having Danny Devito play the character was incredibly entertaining, part of it comes from the Penguin’s plans are much larger and devious than the Joker’s. Or at least, Penguin’s goals are more specific and we as an audience get to understand why he wants what he wants. We didn’t really get that with the Jack Nicholson’s Joker. So, personally I think Danny Devito did a great job with the role, and played it as over the top as possible in a good way.

However, Michelle Pfieffer’s Catwoman is over the top in a bad way. Her character is less the sly, funny, mischievous cat burglar fans knew and more the perspective of woman who snapped under the confides of society and is finally fighting back. Her character is interesting, but it’s not really Catwoman, and Michelle Pfieffer plays the stressed out, exhausted, and unappreciated side of Selina Kyle very well, but when she’s Catwoman she over does the “strong independent woman who don’t need no man” aspect of the character. It makes her less dynamic and simpler as a character with basic desires and motivation. I do know that a lot of people who like her character, but for me every time she was on-screen as Catwoman I kept getting bored. I will say her costume and design are memorable, and fun, and her transformation scene is one of the best scenes ever put to film. Much like Jack Nicholson’s unwrapping scene in the first Batman. 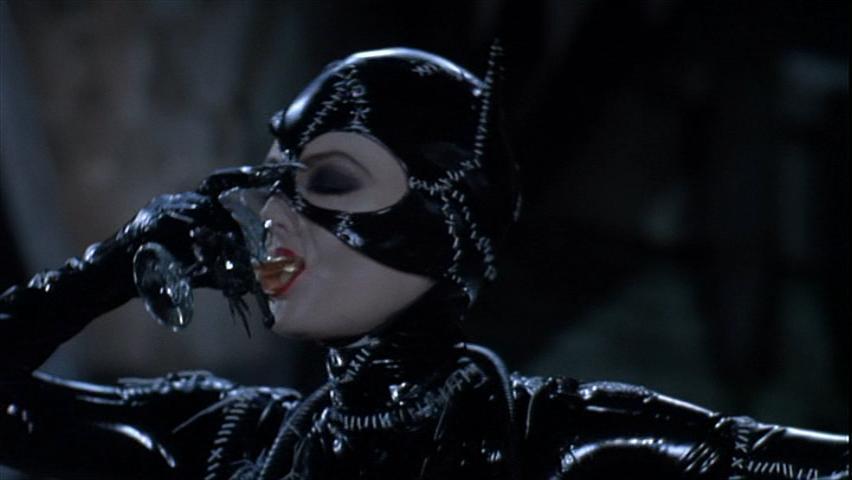 And then finally there is Christopher Walken as businessman Max Schreck. There is so much oddness to any Christopher Walken role, but here it’s somehow even more bizarre. You would think that he plays it bizarrely over the top like Michelle Pfieffer, but no. He actually underplays the role pretty much throughout the movie, and it actually makes him a more terrifying threat. However, he also stands out like a sore thumb, he has the same cadences and mannerisms he has in all of his other roles, and it just feels weird to see in a Batman movie… Even a Tim Burton Batman movie. Perhaps that’s just the thing with any Christopher Walken role, you can’t really see him as that character. You just see Christopher Walken. That doesn’t mean he’s a bad actor, or even did a bad job, but it’s a little weird to see him go up against Batman.

Speaking of titular role, Michael Keaton once again brings a lot of subtlety to the character. Burton and Keaton mastered the “less is more” approach to the character, and as an audience member, it’s really easy to feel Bruce Wayne’s emotional struggle. There’s a scene I love where Bruce Wayne is trying to find out all about The Penguin’s criminal activity, yet when he does find the connection he doesn’t feel any better. He feels worse that now he has to hunt down and take out a man who’s already had a miserable life. It shows the detective angle of Batman, but also the compassion he does have. There are also clever mentions of Vicki Vale from the first movie, and how their relationship didn’t pan out. It goes deeper into the character without saying too much. 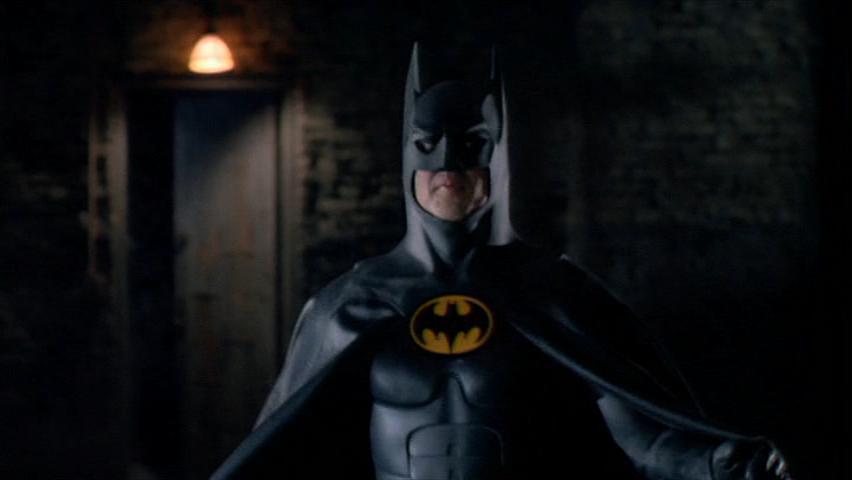 However, there is something about Batman’s character that I neglected to mention in my article about Batman, not because I forgot about it, but because it’s a bigger problem in this film. Batman is much more willing to kill. Now the “no kill rule” wasn’t really a thing until the 40s and 50s when superhero comics were becoming marketed for children. However, it became pretty much established in the canon by the time Batman was released in theaters. And in both movies its weird to see Batman just straight up kill a few people. Sometimes it’s accidental, but most of the time he’s doing it with glee. There’s one scene where he shoves a few sticks of dynamite down someone’s pants and throws them down the sewer with a big old smile on his face. It makes Batman just so much more evil, which kind of negates the compassionate Bruce Wayne we see.

The script is solid, writer Daniel Waters understands the pacing and has strong dialogue to match. There are some goofy lines like the first movie, but it’s mostly good stuff. The set design and the atmosphere of the film all scream comic book aesthetic. It continues the feeling of fantasy, and timelessness Tim Burton’s Gotham City has. However, the problem with this movie does come from the negativity and bitterness the movie maintains. It has an overly violent Batman, a disgusting Penguin who attempts infanticide and walks around in a suit filled with questionable stains, a Catwoman whose origin story involves being thrown out a window, and a cynical look at justice and heroism.

It’s a bitter film, and it might not be for everybody. However, because I’m a dark, disturbing person, I think this movie is very good. I’ll admit a lot of things that take me out of the movie, but the mood and Gothic atmosphere the movie creates is wonderfully well done, and still has that great Burton feel behind it. The action is not the best, but for 1992, it was pretty damn good. The franchise still understands the darkness, and emotional inner-turmoil Batman goes through. And it’s great to see how they evolved the character. Again, it might not be for everyone, but I always recommend giving it a watch.

This would be the last Batman movie Tim Burton and Michael Keaton did together, as Burton lost interest in the franchise and wanted to work on his own projects, and Keaton didn’t want to do another Batman movie without Burton. It probably wasn’t as big of a high note they could have ended on, but it was a good departure. Unfortunately, Warner Bros. wanted two more Batman movies… Don’t worry, we’ll get to them.

But, for next time, we’ll get away from Batman and focus again on Superman with his sequel; where the Man of Steel kneels before Zod.