Batman Forever is the first Batman film Joel Shumacher directed; many fans consider this film as the start of a rather embarrassing time for the Caped Crusader. Instead of  continuing the dark, brooding atmospheric vision Burton had created, The executives at Warner pressured Shumacher to make the next Batman movie more fun and kid friendly. So, Shumacher made a film that still looked very much like the previous two Tim Burton movies, but tonally is more akin to the 1966 Batman show. This film is bizarre and campy, and some people say this was the beginning of the end for the Dark Knight. But there are some interesting elements brought to the table here. Or, at the very least, some really entertaining moments.

What’s strange about this movie is that there’s no real inciting incident. In the first film it was the Batman’s meeting with Jack Napier. In the second movie it was the Penguin kidnapping Max Schreck. But, this movie just starts with Two Face holding up a bank to kill Batman, and then the movie just keeps going. There are other moments in the movie that happen, such as the Riddler’s origin, Two Face and Riddler meeting, Nicole Kidman’s character arc, and Robin’s origin, but they’re not really the same thing as an inciting incident. The movie just keeps moving with very little semblance of a classic structure. It’s very crowded with new characters and plot threads, but strangely the film manages to give each new element just the right amount of screen time. It’s balanced out quite well, despite being manic.

In this film, Batman (Val Kilmer) and Two-Face (Tommy Lee-Jones) are playing a deadly game of Cat and Mouse in the typical over the top comic book fashion. But, while that’s going on The Riddler (Jim Carrey) discovers a way to increase his intelligence from other people’s minds. Meanwhile, Dr. Chase Meridian (Nicole Kidman) is obsessing over Batman while consulting Bruce Wayne over some past trauma. And on top of all that, Bruce Wayne houses Dick Grayson (Chris O’Donnell), after Two-Face murdered his parents. 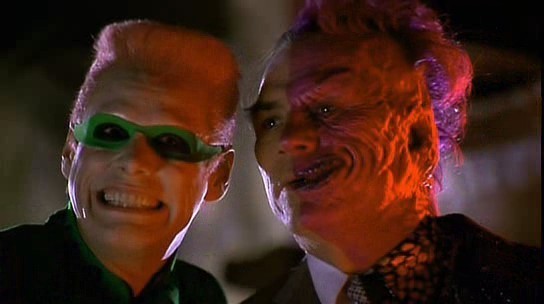 Val Kilmer plays Batman similarly to how Keaton played him. There’s a lot of subtlety in the performance, but Kilmer plays it VERY subtle and quiet. While Keaton still managed to bring out a sense of restrained rage and aggression through his actions, Kilmer plays the Dark Knight almost too quiet, to the point of disinterest. I never really saw him as Batman, but rather as a man dressed up as Batman. He’s so stiff in his movements and passive in his tone that he never really owned up to the role. Nicole Kidman’s Chase Meridian is an interesting character on paper, but instead she’s this weird sex goddess, some kinky psychologist who’s trying to get in Batman’s armored pants. I’m not sure if it was the script or Kidman’s acting, but it constantly felt weirdly over the top and borderline psychotic. Chris O’Donnell’s Robin is also done pretty well. He’s competent, but gets in over his head, and has probably the strongest arc in the movie. We’ll get into how whiney he is when we hit up Batman & Robin. 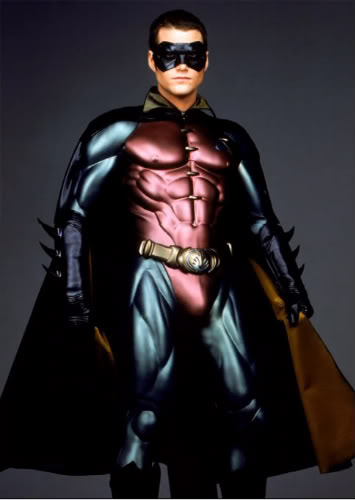 When it comes to long-standing Batman enemies, Two-Face and Riddler, Tommy Lee-Jones and Jim Carrey look like they’re having the time of their lives. They both bring an exuberant amount of energy to the characters. They’re nothing like the characters they’re based on; Riddler is just another Jim Carrey character (which was understandable. Back in 1995, Jim Carrey ruled the universe). And the tragedy of Two-Face is completely thrown out the window and replaced with Tommy Lee-Jones playing… an excitable drug addict with some weird purple latex on his face. When I was preparing myself for this movie, I was dreading the thought of watching these two. But there’s a great sense of comedic timing and energy between the two that, weirdly, works very well. I also think it’s pretty clever to have Two-Face obsess over killing Batman while Riddler obsesses over destroying Bruce Wayne. It makes for a fun dichotomy, and raises the stakes.

The best parts of the movie are actually the psychological sessions between Bruce and Chase. We as an audience get more into how and why Bruce became Batman and how it affected him as a child. There’s an overwhelming sense of sadness in his past, and it’s handled with a lot of dignity, surprisingly. There are also some compelling moments of dialogue as Robin seeks to exact revenge, and Bruce eventually accepting that Grayson will join him in his heroics. It’s not perfect, but it’s definitely entertaining to watch, and they do touch on a few interesting concepts that the previous iterations weren’t really doing.

Also, you’ve got to give Shumacher credit in understanding the visual style of Burton. He managed to mirror the setting of Gotham City quite well, and still evoke the timeless feeling of the world Burton created. The action is also fairly creative and fun, the humor is on point, and admittedly I am slightly blinded by nostalgia goggles for this film.

Even though it’s kind of a crappy movie. It has a strange pacing, the story isn’t anything new, and despite it being well-balanced, there are characters that just don’t get the development that they should.

So, yeah the movie isn’t that great, and it’s clear as to why fans say this was the beginning of the end for Batman movies at the time. But I still say that at the film is campy and fun. Those adjectives don’t necessarily equate to good, but it’s still enjoyable in a vacuum. You probably know whether you like the movie already; however, if you haven’t seen it I recommend giving it a shot. It’ll definitely have a few laugh out loud moments to keep it from getting boring.

Next time we look Christopher Reeves’ third Superman film. Where Superman finally got a sidekick… Richard Pryor. It is so much worse than you can imagine.