Gore, Clowns, And A Mexican Nazi? ‘31‘ Has All You Need In A Horror Movie!

When you walk into a Rob Zombie film, you know what you are getting. Making his directorial debut in 2003 with ‘House Of 1000 Corpses‘, Zombie has since created a very distinct brand. From his ‘Halloween‘ reboot to original pieces like ‘Lords Of Salem‘, the man loves his 70’s inspired horror. ‘31‘ is just another example of how much exploitation and grindhouse play a part in Rob Zombie’s work.

‘31‘ follows a group of carnival workers who are kidnapped and must fight for their lives on Halloween night in 1976. Their captors force them to play a dangerous and depraved game called 31, in which they have to try to survive 12 hours while being chased by multiple killers called “The Heads”. The five players are Charly (Sheri Moon Zombie), Panda (Lawrence Hilton-Jacobs), Roscoe (Jeff Daniel Phillips), Venus (Meg Foster), and Levon (Kevin Jackson). As the group goes through a maze of death rooms, the aristocrat-wig wearing leaders place bets on the players odds of survival.

It’s like a even-more twisted version of the classic short story ‘The Most Dangerous Game‘ published in 1924. A simple tale told through the unique eyes of Rob Zombie.

The film hits all the notes I expect from Zombie but also shows the improvement in his filmmaking. ‘31‘ has some striking cinematography mixed with very stylistic editing. Comparing this to his first film and the man has made leaps and bounds in terms of behind-the-camera work. Take his already amazing classic rock ‘n’ roll soundtracks, add these new film tricks, and Rob Zombie’s work feels complete.

In Hell, everybody loves popcorn.
– Doom-Head

There isn’t much to grasp at story-wise but it does lead to some bigger questions on how long this game has been going on. I don’t mind an easy plot when the real focus is on the violence and characters. Zombie even admits in a Q&A following the Fathom Event screening that the plot was something he pulled out of no-where. ‘31‘ knows exactly what type of film it is and that’s when it really shines. Characters ranging from final-girl Charly to sadistic leader Father Murder (Malcolm McDowell) all excel in their roles. I personally loved seeing all the different killers in the film; every-time a Head was killed, another was there to replace them. And those kills were gruesome but I will say they weren’t as graphic as you’d expect. I am curious to see what the Director’s Cut has in terms of upping the gore.

Just in time for Halloween this year, ‘31‘ is a great modern film to add to a night at home watching scary movies. There is enough 70’s nostalgia to please fans of the decade; check out for references to Wolfman Jack and a great use of a classic Aerosmith song! Just as polarizing as his other films but with a bit more polish, Rob Zombie is finally coming into his own as a filmmaker. I can’t wait to see his long-awaited transition from horror. But for the time being, keep the gory fun hits like this coming!

Fun Fact: The film was mostly crowd-funded. Some of the people who donated to the film even appeared as goons in the movie! 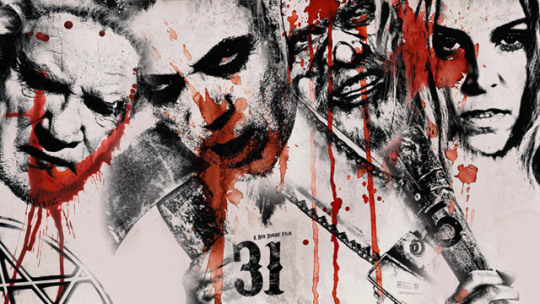 I recommend this highly! You can find ‘31‘ digitally on September 16th and in a limited release September 21st.