Babylon is a primarily competent but messy tribute to Hollywood and the Roaring ’20s. It’s a chaotic three-hour extravaganza that never loses its momentum. However, the first 40 minutes or so are untouchable. The film reels you into the lives of these rising stars, and even if the intensity dies down, you’ll have reason to invest in the narrative. Some of the best filmmaking for the year can be found in Babylon’s opening sequence, which sets the stage for this great film.

My only gripe with Babylon is related to its desire to be meaningful, but the messages can seem lost along the way. The film primarily depicts Hollywood’s transition to sound after noticing that’s what the audience is looking for. Aside from that, it’s a rise-and-fall story centered on a group of actors and other industry workers. Directed and written by Damien Chazelle, Babylon stars Brad Pitt, Margot Robbie, Diego Calva, Jean Smart, Tobey Maguire, and Samara Weaving.

Babylon traces the rise and fall of multiple stars during early Hollywood and their bonds over time. The screenplay is a love letter to those that love cinema more than cinema itself. Despite the film’s intention to be a tribute to filmmaking, anyone that looks to cinema as an escape might appreciate this more than others. Chazelle depicts the struggles of filmmaking in a very comedic fashion. One moment, in particular, features several takes to get a scene right. This is a setback that many projects still face today, but this sequence was a wonderful example of how hilarious Babylon can be. 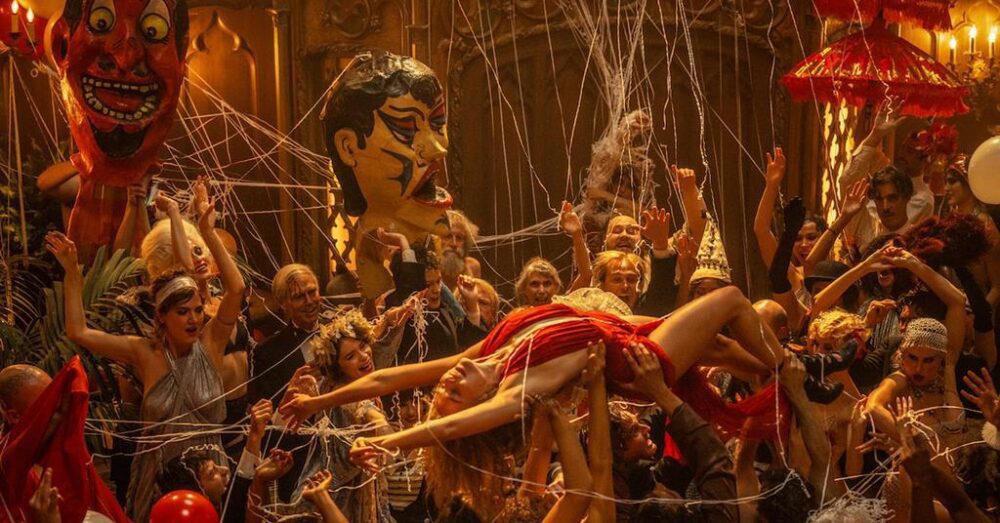 The shift in tone is handled with ease throughout the runtime, which kept the film engaging for me. Robbie stars as Nellie LaRoy, an aspiring actress who wants to leave behind her troubled youth. Given Robbie’s current star power, the film wisely utilizes her to carry the story. However, I would argue it is Calva’s character who is the main focus of the cast. Calva stars as Manny Torres, a film assistant who wants to become a star like Nellie. Manny is first introduced during a very wild opening party at Jack Conrad’s (Pitt) mansion.

His character is the easiest to connect to and it inflates the value of characters like Nellie and Jack. His work as an assistant isn’t the appeal, but his desire to be part of the lives of the bigger stars is. That desire is something members of the general public can start to feel as they watch their fan favorites live their dreams. Manny decides to help the talent during their downfalls, which can speak to portions of fandoms that put their idols before themselves. His journey to reach that opportunity in the spotlight is the heart of the story.

Chazelle provides depth to all the characters, but Manny just stands out as the most relatable. His concern and interest in Nellie and Jack help their arcs become more rewarding as the film progresses. Babylon also examines the mental anguish that celebrities go through, as their stardom begins to fade. Jack’s arc is the most compelling example, but Pitt’s shifts from overly confident to worrisome create an extra layer for Jack’s downfall. Every performance is captivating, but Robbie and Pitt are firing on all cylinders.

The immaculate set designs, stellar cinematography, and Justin Hurwitz’s vibrant score make Babylon a film that should be experienced in theaters. Pacing is another strong suit, as each scene accomplishes what it intends and moves forward without carrying on for too long. Babylon wants to be meaningful, and it is to an extent, but overall it’s just a technically strong film with messy narrative bits.

Babylon wants to be meaningful, and it is to an extent, but overall it's just a technically strong film with messy narrative bits.Review: Babylon is a bombastic tribute to Hollywood's golden era