Entertainment Weekly provided fans with some tidbits from Comic-Con about the upcoming ‘Wonder Woman‘ film. There were photos showcasing the Themysciran princess with her love interest Steve Trevor and actress Gal Gadot working with director Patty Jenkins. We also got an official plot synopsis. 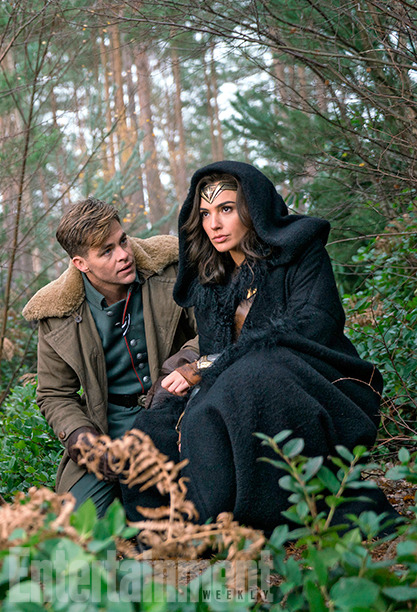 “Before she was Wonder Woman, she was Diana, princess of the Amazons, trained to be an unconquerable warrior. Raised on a sheltered island paradise, when an American pilot crashes on their shores and tells of a massive conflict raging in the outside world, Diana leaves her home, convinced she can stop the threat. Fighting alongside man in a war to end all wars, Diana will discover her full powers…and her true destiny.” The film is being described as an origin story for the character but also an action-adventure saga and a love story. It seems like the director Patty Jenkins (‘Monster‘) is out to make an epic big-screen introduction for Wonder Woman. Jenkins gushed to Entertainment Weekly saying Gadot’s performance and said ‘Wonder Woman‘ is “the movie I’ve wanted to make my entire life.”

Movie-goers were introduced to the character in 2016’s ‘Batman v Superman’ as a mysterious beauty who can kick-ass. That allure will be expanded on throughout the film while finally introducing audiences to the women of Themyscira. ‘Wonder Woman‘ begins on the island ruled by women and follows the titular character as she leaves her home for the first time to save the world. She finds herself in Europe at the end of World War 1 and faces a much bigger threat than expected. A female-led superhero film has never been done to this magnitude before.

Will a trailer for the film debut at San Diego Comic-Con? CW already gave us a sneak-peek but Comic-Con would be the time to tease what’s to come.