Batman and the Morality of Killing

There is a terrible beauty to Batman v Superman: Dawn of Justice, one that leaves me simultaneously able to enjoy the movie, but equally infuriated with many of its creative choices. Chief among these is the death toll that Batman is directly responsible for. We will leave aside the Knightmare sequence as that is a dream set in a post-apocalyptic society, so Batman’s resort to lethal force can be excused to a certain extent. What leaves one quite shocked is the willingness to kill or reckless endanger those around him during the spectacular Batmobile chase. This article is going to assume you’ve seen the movie, so if you haven’t come back latter because there be spoilers below. 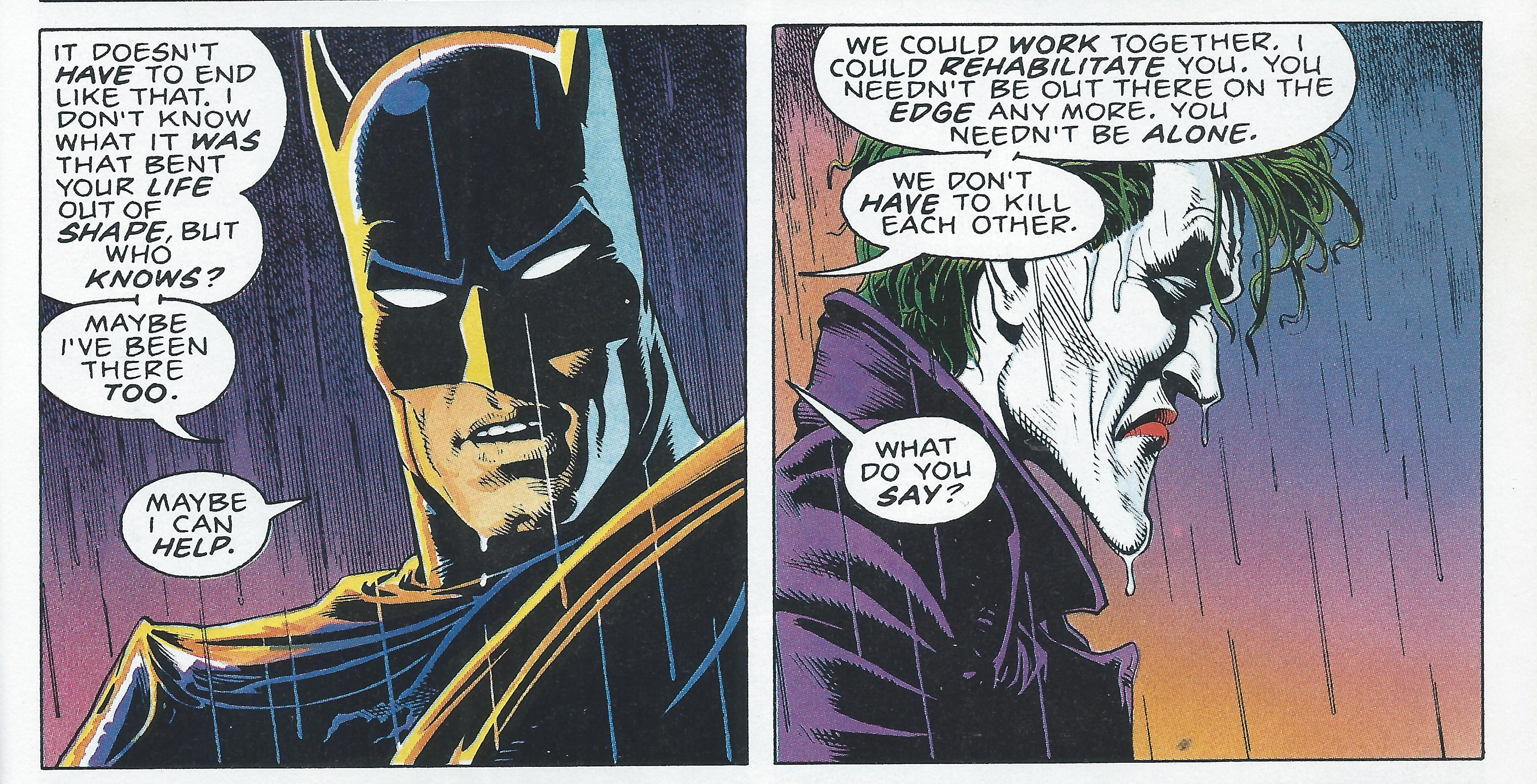 Synder has been quoted as saying the deaths caused during the chase scene and others aren’t murder so much as they are manslaughter. Deaths for this Batman are unfortunate side-effects, rather than his intended aims. He further argues that Frank Miller’s seminal Dark Knight Returns, from which the movie draws heavily, features a scene in which our hero fatally shoots a mutant gang member. While that scene is ambiguous, the reason such an interpretation has weight or is in any way significant is because we know such an action is not par for the course and Synder doesn’t seem to understand that. Moreover, it’s an interpretation that doesn’t fit with the rest of the book. It’s worth noting that in that same story, Batman refused to kill the Joker forcing the clown prince of crime to commit suicide in order to frame the Caped Crusader. Synder further argues that other directors had Batman indirectly kill people and didn’t get as much criticism. Clearly, he doesn’t understand that past failures don’t justify present ones. This doesn’t seem like a director making a bold choice about a character due to its story-telling potential, but rather a question of efficacy. It’s probably fairer to say that Synder wanted cool stuff to happen on screen during the chase scene and couldn’t figure out a way to have that happen without killing people and therefore, in order to fulfill that vision, Batman became a killer.

I’m a fan of DC Comics; I understand we have a multi-verse. I’ve read stories featuring a Batman, who kills. I’ve read stories of a Superman who establishes himself as the supreme ruler. I’ve read stories about heroes who go too far and the consequences that follow. Those stories can be interesting. Indeed, Mark Millar’s Red Son is one of the finest works the medium has produced in recent memory, but much of their appeal comes from that the are subverting the established norm. It would be shocking to see Knightmare Batman being forced to resort to killing in the wake of the destruction left by Darkseid and a twisted Superman’s regime, but why should we care if this guy is prone to gunning down his problems in the first place? If this Batman agrees in principle that killing is okay to achieve to win his war, then it’s a wonder that any of his foes are alive to take part in Suicide Squad. If he isn’t okay with killing then why should it matter if it’s collateral damage in a car chase vs. snapping a dude’s neck? Synder can’t have it both ways, either these characters have a moral code at the cores, or they don’t. That code need not be right or wrong, but it has to be there if we are to decide who we would align ourselves with. If the point he wants to make is that there is no morality and that the concept itself is relative, then we still require that code to be embodied in our heroes so that we can deconstruct it. Synder’s approach to Batman in this regard is lazy at best and smacks of a director wanting to create a “not your father’s Batman” version of the character.

The movie isn’t about that philosophical conflict as much as the trailers or film-maker would have you believe. Never are our heroes forced to put their ideologies to the test. Never does Batman’s killing ever become something that the character is forced to confront. As much as Superman’s storyline amounts to wasted potential, at least, he is forced to confront the idea that being a god-like figure may not have as positive an impact on the world as he thought. In comparison, Batman is essentially given free reign to do whatever he wants and ultimately, is vindicated for it. Batman and Superman unite not because they have come to a consensus, but out of necessity because there were thirty minutes left and there was some Justice League set-up to be had. One could argue that Batman telling Wonder Woman that he “will not fail [Superman] in death as he did in life” shows that he may be inspired to take a less lethal approach, but it could also just be a surface level reference to assembling the Justice League.Man of Steel, for all its faults, at least, had Clark’s killing of Zod be followed immediately by a blood-curdling scream of frustration and sorrow indicating that the act went against the character’s moral fiber. I may not agree with the creative choice to have him do that, but it makes clear that for this Superman, killing was a big deal, but for Batman, it was just another Tuesday in Gotham City. Alfred remarks that Batman is operating under “new rules” and is becoming cruel, but that is done more as an aside note rather than a challenge to his behavior.

There have been times where Batman has killed or expressed the intent to kill in the comics, but that has been a moral low for the character, and they show that the decision to kill or not to kill is a burden. Personally, I prefer that Batman’s code include no killing and no guns, but there is story potential in examining what happens if he, for whatever reason is forced into such a scenario. The opening episode of Batman Beyond is a great example of this as an elder Bruce Wayne retired upon having been forced to use a gun in self-defense. This Bruce Wayne is horrified and disgusted with himself for even entertaining the notion and vows never to put on the Bat-Suit again. If you are going to have Batman break his code, then make it meaningful and show that this act had weight. Ben Affleck’s Batman is shown throughout the movie to been haunted by the spectres of those he has failed to save be it the citizens Metropolis or his own side-kick. Why can’t the decision to kill have a similar effect on him?

In the latest season of Daredevil, Marvel Studios presented us with two brutal vigilantes, the Punisher and Daredevil, whose philosophical conflict rested on the use of lethal force. For Daredevil, life was sacred, and God was the only one fit to judge in that matter. For the Punisher, the Man Without Fear was only a half-measure and the safety of the average citizen rested on putting criminals down for good. The question the audience is left with is on whether or not there is any meaningful distinction between the two or whether the Punisher is merely the logical extension of a society that tolerates vigilantism. The debate over the choice that Frank Castle has to make every day (to shoot and become a killer or to do nothing and have an innocent life on your conscience) is harrowing and forces one to reassess their beliefs. Batman v Superman had an interesting opportunity to address similar themes, but opted instead for the easy route, for the CGI slugfest rather than the higher burden the film’s own promotion set for itself and one that graphic novels such as Kingdom Come have addressed in the past.

How can the Justice League ever hope to live up to its name if it lacks a moral compass? Justice is an abstract notion, it ebbs and flows. While the titular Justice League movie is sure to inform us as to what these so-called heroes stand for, this universe’s Batman seems to kill whenever it suits him. It’s hard to understand what kind of justice that is and why this man has the moral authority to gather and lead Earth’s mightiest heroes in battle. The story of Batman v Superman: Dawn of Justice is one that my fifteen-year-old self could have written, but even that version of me understood that not every comic book had to be Watchmen. Batman is a complex character that lends himself to darker stories and more brutal tactics that some find unsavory, but that doesn’t mean he has to be a killer. Indeed, it’s more interesting to have him always be tempted by that choice, to have that desire creep in, but to struggle with it and the consequences of that inaction. One of the greatest Batman stories of the modern era is “Under the Hood” where his former Robin; Jason Todd confronts Bruce about his failure to kill the Joker following a series of events that lead to the latter killing the former. Batman argues that despite his desire to kill the Joker, to do so would be to sacrifice soul, to become just as bad as the Joker. For Bruce Wayne, the easy way out would be to kill his enemies, but the morally superior thing, the harder thing is to let them live. Maybe it’s Thomas Wayne’s act of aggression in attempting to take on that mugger that leads to this version of Batman being more willing to kill, but that’s not a Batman that I want to see which is a shame because other than that Ben Affleck is a perfect Batman. It’s quite telling that Bruce Wayne remarks that there aren’t many good guys left in Gotham and not many that stayed that way. I wonder if the Dark Knight isn’t referring to himself in that scene because at the end of the film, I was left with an uneasy feeling towards this Batman and that is not something that I thought I’d ever say.

This discussion will end up being pretty academic because Synder and Co. have been rewarded for their shoddy choices. Batman v Superman: Dawn of Justice had the best opening weekend of any comic book movie to date worldwide. Warner Bros will make a killing, and it won’t matter what the reviews say or what those who understand the characters complain about. DC seems committed to Synder’s vision, let’s just hope it gets a little brighter from here on out.