Will Somebody Please Give Pixar a Hug This Father’s Day

Pixar – the studio that loves to make you cry over toys, grandmothers, and 30-second marriage montages.

But this Father’s Day, I ask that you wipe your tears, and instead reach out your arms.

Because Pixar has got some daddy issues.

Here are five moments when Pixar was (not so) silently pleading for a hug.

*Note: Spoilers ahead, and maybe tears, so read at your own risk. An obvious place to start maybe, but aside from Andy’s missing dad (and no, he’s not dead), Finding Nemo was the first real clue that Pixar had some unresolved feelings.

This one starts out nice and slow, with Marlin’s fish wife and one thousand of his fish babies eaten by a barracuda in the first ten seconds.

So now Marlin is an overprotective shut-in for his one remaining son. Nemo, said son, exhibits a deep desire to see the world and experience life, rather than be the prisoner of his father’s grief. 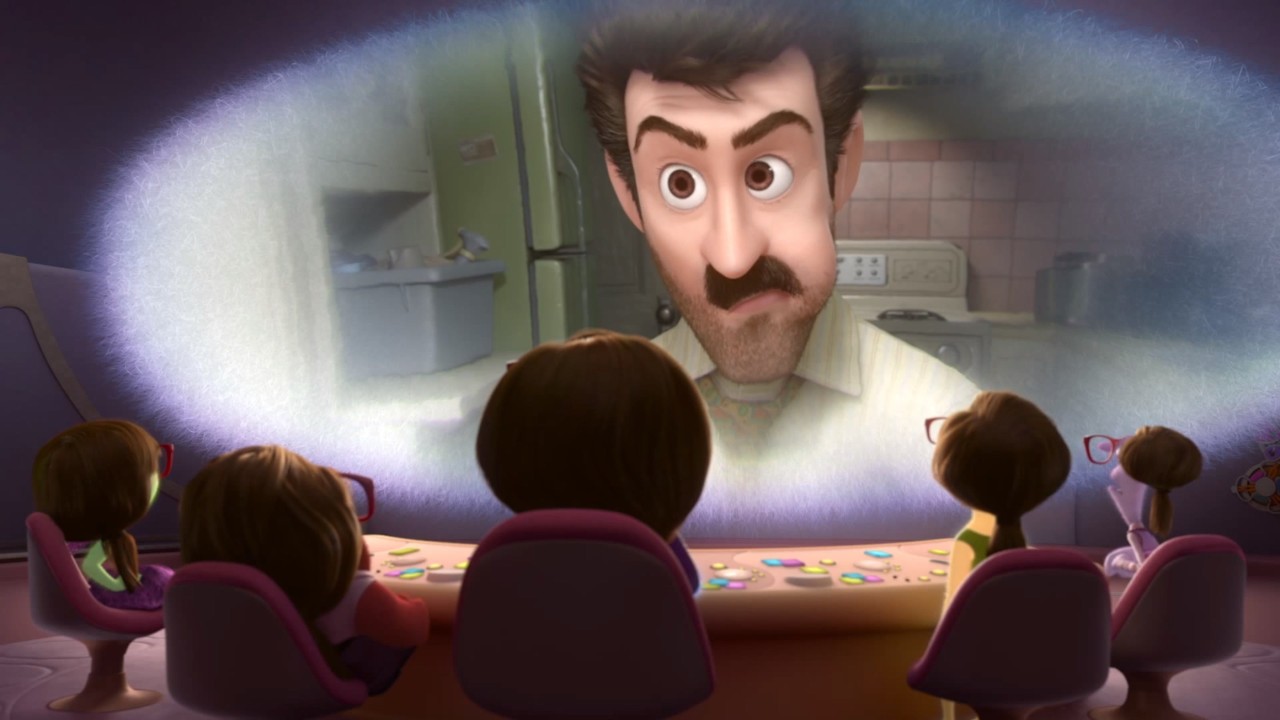 Inside Out was lauded by critics and psychologists for its portrayal of emotional health, especially in regards to how it treated “good” feelings vs. “bad” feelings. Riley, the girl whose mind is the setting of the film, must learn to accept both joy and sadness.

But the source of Riley’s tension can be overlooked. She’s stressed because her family moved from Minnesota to San Francisco, away from her hockey team and normal pizza.

But the emotional conflict that drives her to eventually run away is rooted in the mask she is asked to wear by her mother, on behalf of her father.

Soon after moving into the new house, there is a scene in which Riley lies on the floor of her still-unpacked room. Her mother enters, and they have the following exchange:

Mom: On the phone. This new venture is keeping him pretty busy. Your dad’s a little stressed — you know, about getting his new company up and running. I guess all I really want to say is: thank you. You know, through all this confusion you’ve stayed… well, you’ve stayed our happy girl! Your dad’s under a lot of pressure. But if you and I can keep smiling, it would be a big help. We can do that for him, right?

That last line is key. Riley feels pressured, both by her mother and watching her parents argue about the moving truck, to put on a smile, even if she doesn’t feel like she can.

Riley has to push down her feelings, suppress the “bad,” in service of her father’s career.

But maybe not strong enough.

That’s the underlying conflict behind The Incredibles, and what that conflict means changes as the movie develops. Bob isn’t strong enough to retire, or to say no to such a great offer, or to beat Syndrome.

But then, at the climax of the movie, the true source of Bob’s concern is revealed.

Bob: I have to do this alone.

HELEN: What is this to you? Playtime?

HELEN: So you can be Mr. lncredible again?

HELEN: Then what? What is it?

HELEN: Strong enough. And this will make you stronger?

HELEN: That’s what this is? Some sort of workout?

Bob has conflated his masculinity, his identity as a superhero, and his very competency as a father with the only thing he knows how to do: be strong. If he’s not strong, then he could lose his family.

He can’t see the truth: the family doesn’t need him to be strong, just present.

14 years later, Incredibles 2 delivers the fantastic news that Bob has overcome his insecurities, the family is fine and all is well in the-

In the sequel, Bob no longer feels that he has to be strong to keep his family together. But he does exhibit insecurities around his capability to just be the dad his kids need him to be.

Now that Helen is the breadwinner, Bob has to help with the math homework, empathize with his daughter’s personal struggles, and try to understand a baby.

And being strong doesn’t help with any of that. He learns the “new” math, tries to help his daughter (despite her wishes) and finally figures out the baby, but only by sacrificing his health and mental well-being.

Despite Bob’s best efforts, he continues to fail, in his own mind, at being the kind of father that his family needs and deserves. 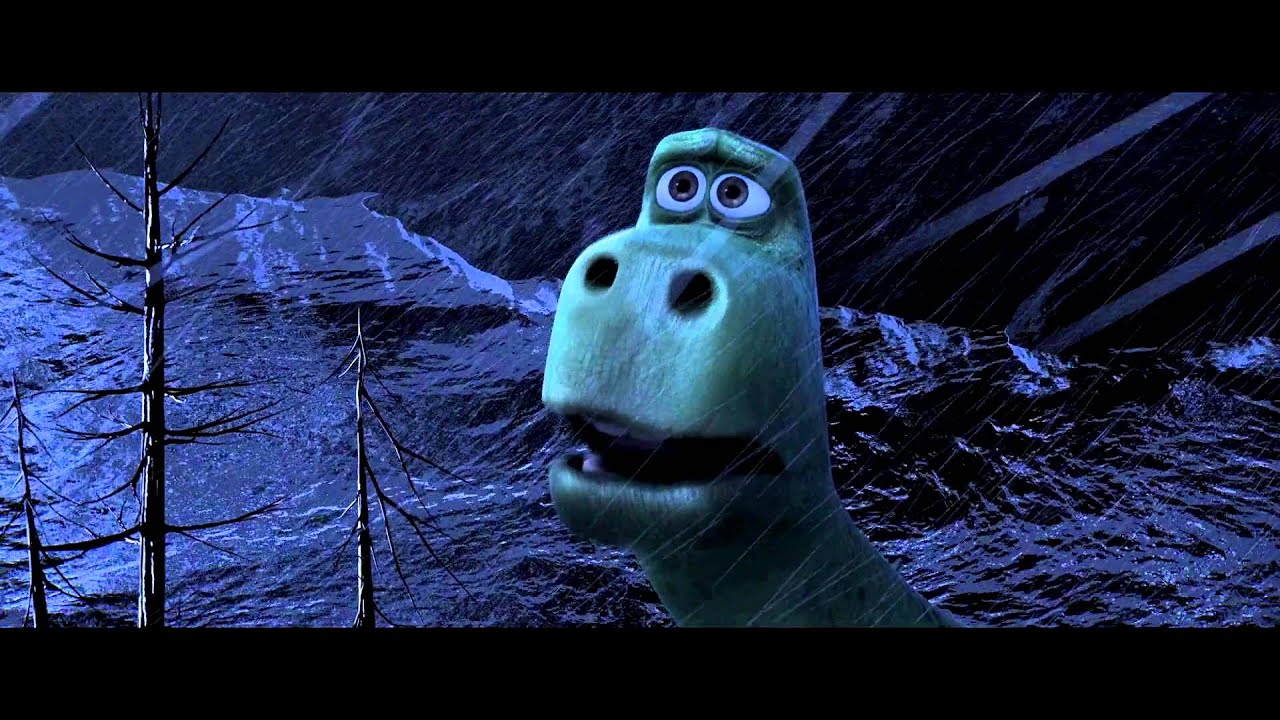 You forgot about The Good Dinosaur, didn’t you? Pixar’s red-headed stepchild, as it were. Or maybe that’s A Bug’s Life? Cars 2?

Because you’ve no doubt forgotten the plot of this one, here’s the gist: Arlo is the runt in a family of dinosaur farmers – that is, dinosaurs that farm – and is very timid. His dad wants him to take on a little more responsibility, and generally grow up a bit, so he tasks him with guarding the farm. Arlo catches a caveboy in a trap but lets him go. Arlo’s dad is disappointed and takes Arlo with him to go find the caveboy in a canyon.

Then Arlo gets scared of the lightning, trips, and falls.

And then his dad dies in a flash flood.

Remember The Lion King, when Mufasa gets run over by wildebeest and Scar’s like “Simba, this your fault” and Simba is like “oh dang you’re right it is.”

It’s just like that, except that there’s no one lying to Arlo, it just straight up is his fault, and he watches his dad die in front him.

All because he wasn’t brave or responsible enough to do his part to help the family. 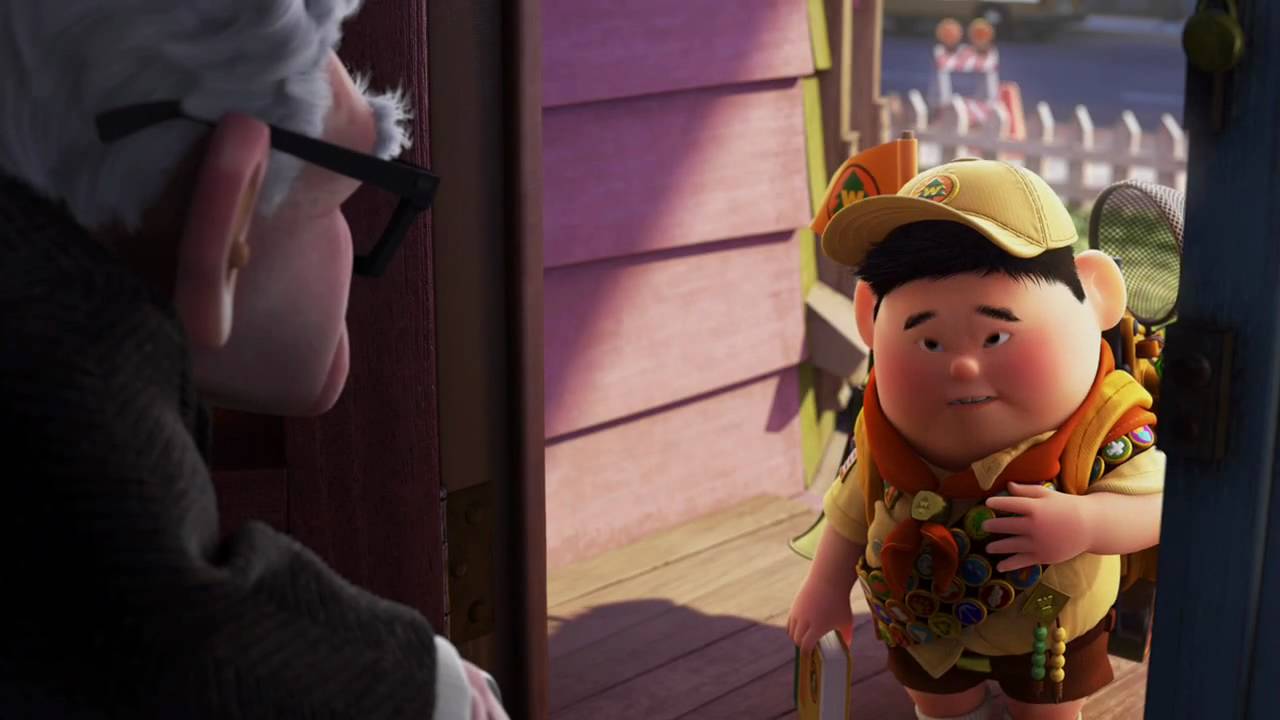 Didn’t expect this one, did you? Up is infamous for its beautiful montage scene, depicting Carl and Ellie’s life together, and her subsequent passing.

But less talked about is Russell, the 6-year old Wilderness Explorer, in search of his final “Help the Elderly” badge.

Russell isn’t just trying to get his badge so he can become a Senior Explorer. He’s doing it so his father will give him a second of notice.

RUSSELL: See these? These are my Wilderness Explorer badges. You may notice one is missing. It’s my Assisting the Elderly badge. If I get it I will become a Senior Wilderness Explorer! It’s gonna be great! There’s a big ceremony, and all the dads come, and they pin on our badges…

CARL: Well, why didn’t you ask your Dad how to build a tent?

RUSSELL: I don’t think he wants to talk about this stuff.

CARL: Why don’t you try him sometime? Maybe he’ll surprise you.

CARL: He’s got to be home sometime.

RUSSELL: Well, I called, but Phyllis told me I bug him too much.

CARL: Phyllis? You call your own mother by her first name?

Russell: But he promised he’d come to my Explorer ceremony to pin on my Assisting the Elderly badge, so he can show me about tents then, right?

Yep. Russell’s parents are divorced, or at least very much not together.

His dad isn’t around very much, and Phyllis, his dad’s new lady friend, isn’t keen on helping Russell build a relationship with his father.

Russell thinks that by getting this final badge, he can get past Phyllis and finally sit and eat ice cream and count cars with his dad again.

So, end of the film, Russell is at his ceremony, and low and behold, who is there to pin his badge?

In short, if you happen to see a Pixar this Father’s Day, go ahead and give them a hug.

They really need it.

Happy Father’s Day from everyone at Monkey’s Fighting Robots!