You’ve seen a film like ‘Unforgettable‘ before. From ‘The Hand That Rocks The Cradle‘ to last year’s ‘When the Bough Breaks‘, it’s a familiar tale of melodrama. Two women are fighting over a man, a baby, or each other and it will most likely lead to some deaths. It’s a concept that’s been used by Hollywood for decades. But the genre hasn’t seen the likes of Katherine Heigl’s wide-eyed insanity.

For quite some time, Katherine Heigl has a bit of repetition among audiences. Most don’t enjoy her work and resort to using words like “ice queen” or “bitchy” when describing her. Heigl tried to shake off that title with her roles in romantic comedies but it just further cemented those thoughts. Now with ‘Unforgettable‘, Heigl is taking everything the media has said and using it for this chilling character. There was times when her performance reminded me of Faye Dunaway as Joan Crawford in ‘Mommie Dearest‘. That unquenchable thirst for perfection is a trait found in both characters and something that Heigl uses to chew up the scenery.

Though, any great antagonist needs a great protagonist and that’s Rosario Dawson. It was easy to want to cheer for Dawson’s Julia. She’s the new women trying to find her place in an already established family, and the overbearing ex-wife Tessa (Heigl) isn’t making it easy for anyone. Dawson is so believable in this role but the mind games of Heigl’s Tessa even start to work on the audiences. There’s quite a few times that you start to question who is telling the truth and who to trust. After 2016’s ‘The Girl On The Train‘, you know to question everything because it may not be what it seems. 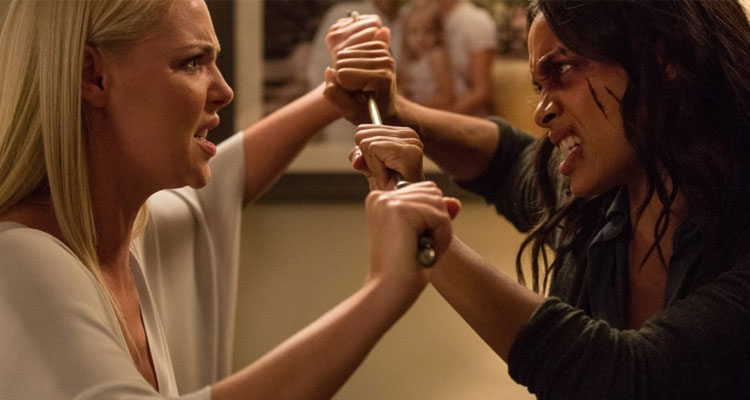 The major difference from ‘Unforgettable‘ and it peers is the fleshed out villain. No matter who played the role of Tessa, it’s layered with so much to bite into. Usually films within the thriller genre, any type of antagonist development is sacrificed to build up the hero. It’s fair to say that both Tessa and Julia share equal amount of screen time with both given plenty of room to grow. Instead of a one-note psychopath, we found there’s a reason Tessa strives for perfection; her own issues as a mother stems from a pretty frigid relationship with her mother, played by Cheryl Ladd.

While Dawson and Heigl benefited from the film, the husband (Geoff Stults) is a rather thankless role. I’m sure it’s the intention but he feels like a prop, rather than actual human. He was used for the women to bicker over or toy with. It makes it hard to get invested in the broken & blossoming relationships if he doesn’t mean anything. The point was for a more female focused film but should a character still suffer to build others?

Katherine Heigl found her niche with this. Playing on the audience’s actual feelings about her perceived personality and working with some juicy material, Heigl needs to be a villain way more often. She has the “love to hate” quality in ‘Unforgettable‘. Thrillers and horror could offer the comeback Heigl has been waiting for.

The rest of the film around her didn’t push any new boundaries. The final act picked up the pace in a cheesy hair-pulling fight and a shock ending but the second act dragged. In the end, it feels like a high budget Lifetime Channel movie.

“Heigl stars as Tessa Connover, who is barely coping with the end of her marriage when her ex-husband, David (Stults), becomes happily engaged to Julia Banks (Dawson)-not only bringing Julia into the home they once shared but also into the life of their daughter, Lilly (Isabella Rice). Trying to settle into her new role as a wife and a stepmother, Julia believes she has finally met the man of her dreams, the man who can help her put her own troubled past behind her. But Tessa’s jealousy soon takes a pathological turn until she will stop at nothing to turn Julia’s dream into her ultimate nightmare.”
–www.unforgettablemovie.com/