It’s Been 25 Years Since ‘My Own Private Idaho’: Gus Van Sant’s Indie Masterpiece

‘My Own Private Idaho’ Turns Twenty-Five!

Sometimes passion projects do work out for artist. Gus Van Sant started working on ‘My Own Private Idaho‘ during the 70’s. It faced many re-writes and became inspired by Shakespeare’s Henry IV. The movie was finally released on October 18th, 1991. Starring Keanu Reeves and the late River Phoenix, ‘My Own Private Idaho‘ is a tragic piece of love and power.

The story follows best friends, Scott and Mike, two hustlers on the streets of Portland. Tired of their lives, they both set out on a journey that tests their relationship. Scott (Keanu Reeves) is the rebel son of the mayor. His best friend Mike (River Phoenix) is a prostitute who suffers from narcolepsy. Under extreme circumstances, the disorder effects his life in dramatic ways. Scott is there for him but their friendship becomes strained after Mike confesses his love to him and Scott meets a beautiful Italian girl.

Keanu Reeves is a household name by now with films like ‘The Matrix‘ and ‘Bill And Ted‘. River Phoenix’s career was sadly cut short but pieces like this made his acting a standout. Phoenix brings a lot to the character and turns Mike into a progressive role in Queer Cinema. I would’ve loved to see him explore more transgressive and controversial roles like this. Same with Keanu Reeves. His character’s relationship with his father was inspired by Shakespeare’s Henry IV. ‘My Own Private Idaho’s‘ dynamic lead roles challenged what Reeves could do as an actor as well as Phoenix. 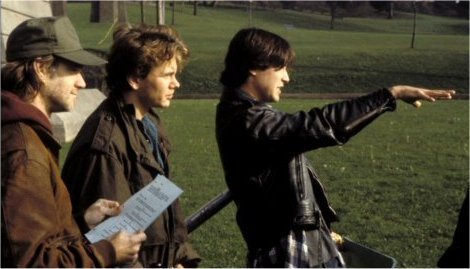 The other big standout performance from this movie was Gus Van Sant’s role from behind the camera. He, not only, crafted this story for decades but used such a surreal filmmaking style. This was an artist still trying to figure out how far they could push the boundaries and he pushed all the right ones. Van Sant has impressive later films like ‘Milk‘ and ‘Good Will Hunting‘ but this is an early hit. ‘My Own Private Idaho‘ is only his third film but he changed cinema and became one of the most prominent LGBT figures in Hollywood.

“The achievement of this film is that is wants to evoke that state of drifting need, and it does.”
-Roger Ebert (2000)

It’s amazing that a movie like this exist and to see it’s just as poignant as ever. Having a gay, poor, disabled, and troubled lead character like River Phoenix’s Mike is still almost unheard of today in movies. The way Gus Van Sant blends the acting with the cinematography or the editing is cinematic magic. Also, this is important to the gay community’s representation in this artistic medium.

‘My Own Private Idaho’ is an independent film masterpiece.