Transformers: The Last Knight‘s laughable narrative mixed with putrid performances by the entire cast make this film the worst of the 2017 summer movie season.

What’s sad about this release is that even after sitting for two and half hours of the latest Transformers film, it’s hard to make sense of the most convoluted narratives of the summer. It shouldn’t be this hard to unwrap the 5th Transformers movie but Micheal Bay really “Bay’d” this whole movie. From what I could gather, Transformers: The Last Knight centers around the idea of reframing. The writers, director, producers, and anyone who is involved in the film want audiences to forget any background knowledge that we may have on the Autobots and the Decepticons. Now we are to believe that Transformers have roamed the earth for centuries, dating back to the time King Arthur, the knights of the round table, and Merlin. Transformer and Human formed an alliance over history to help each other against the forces of evil. This secret history has been entrusted to a particular bloodline which I guess is supposed to be similar to the Knights of the Templar but now falls on the shoulders of Sir Edmund Burton (Anthony Hopkins). Now if the film were just about protecting the hidden history of the Transformers then at least this movie would somewhat make sense, but alas we are talking about a Micheal Bay production. 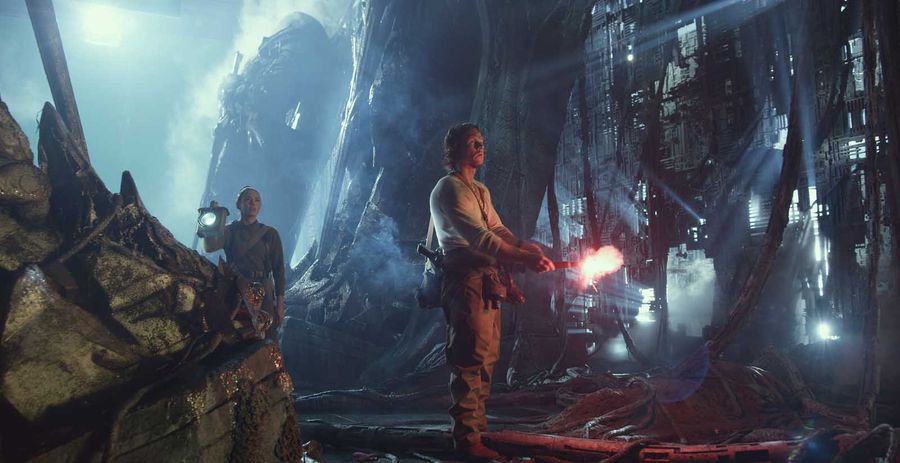 So apparently, Optimus Prime is gone to seek out his creator on his home planet of Cybertron only to realize that their maker (a robot named Quintessa) has become twisted and can turn our hero into a villain. Now his home planet is on a collision course with Earth and Quintessa has every intention of allowing Cybertron to absorb Earth and become one mega planet. The only people who have the power to save mankind are Cade Yerger (Mark Wahlberg), Colonel William Lennox (Josh Duhamel), and Vivian Wembley (Laura Haddox). Vivian is apparently a secret weapon in this fight because not only is she an Oxford Professor but is also a decedent of Merlin (sigh). The film becomes this crazy as hell confusing mess as they race against the clock to save the planet from extinction.

Well, at least what we were looking at on the screen was beautiful. What was taking place on the screen may have been utter garbage, but Michael Bay sure does know how to make trash look beautiful.

Stanley Tucci playing Merlin because at least he can deny his involvement in the project because he’s unrecognizable in the film.

Did Anthony Hopkins even read the script for the film? Did he agree to do this just for the novelty of it all? While I understand that his purpose was to launch this new cinematic universe, his role was so inconsequential and confusing that it could have easily been cut from the film.  Why even have a character to usher in this new world? No one on this movie seems to care at all about coherent narratives or continuity.

The only reason why Mark Wahlberg has to be still doing these films must be because he’s locked into a multi-picture deal. That’s the only logical reason why anyone would agree to be part of this. However, there has to come to the point where even Mr. Wahlberg is over it all. Not even the mountain of cash that he makes doing these films can fill the void of doing an action film that clearly should have never been made to start with. His performance was a textbook example of “going through the motions.”

So you get rid of Megan Fox and replace her with what can only be described as her British doppelganger?

How many times are we supposed to find John Turturro’s role as a conspiracy nut job entertaining?

Can someone please explain to Michael Bay that there’s no need to use slow motion in what appears to be every 4th scene of the film. It was distracting and took the audience out the moment even if that moment was ridiculously bad.

Transformers: The Last Knight only exists because people still are willing to pay to see a bad film based on nostalgia. I grew up playing with Transformers just like most little boys and girls did during the 1980’s, and this movie is an insult to their legacy. Some might argue that this is just a simple movie with cool explosions that’s meant for kids. When exactly did children start to enjoy films that were lacking in originality and dreadfully dull?

Others might argue that this film wasn’t made for the critics and only fans would appreciate the final product. Do you think critics do this job because we somehow aren’t fans of cinema? We are fans just like anyone else who longs only to be entertained. I realize that Transformers isn’t Shakespeare, but that doesn’t mean Michael Bay should just be allowed to pass off any final product as being good. There has to be some element of quality or even portions of the film that are at least redeemable.

Once upon a time, Micheal Bay may have cared, but he certainly doesn’t anymore. That’s the only way to justify how awful this film is. This was the closest I’ve ever come to walking out of a screening. The latest Transformers film was made with merchandise sales in mind, and ticket sales are just secondary. If Transformers: The Last Knight makes back its budget then they’ll be pleased, but if the film doesn’t it won’t matter. They already have plans for multiple sequels and even a Bumblebee spinoff film. The only to stop these types movies from ever coming to light is to stop buying tickets for them. Demand better! Expect more from your director! Unfortunately, if we don’t take this hardline stance, we can just expect more of the same in the coming years ahead.