Stephanie Phillips Talks Spies, Assassins, and Time Travel In ARTEMIS AND THE ASSASSIN

Artemis and the Assassin #1 is out Wednesday, March 18th from AfterShock Comics, and Monkeys Fighting Robots had the chance to speak with writer Stephanie Phillips about the exciting new series.

The series is by Phillips and artists Meghan Hetrick & Francesca Fantini, with colors by Lauren Affe and letters by Troy Peteri. Covers are by Phil Hester.

You can check out Monkeys Fighting Robots’ exclusive four-page preview of the first issue here.

About the series:
What happens when a time-traveling assassin and a spy from 1944 try to kill each other?

For a price, a top-secret assassination organization will travel through time and interfere with watershed moments. Trained as the agency’s top assassin, Maya is sent to kill Virginia Hall, the deadliest spy of WWII. Charged with carrying important plans about the invasion of Normandy to the allied troops, Virginia’s death would have a cataclysmic effect on WWII as we know it. 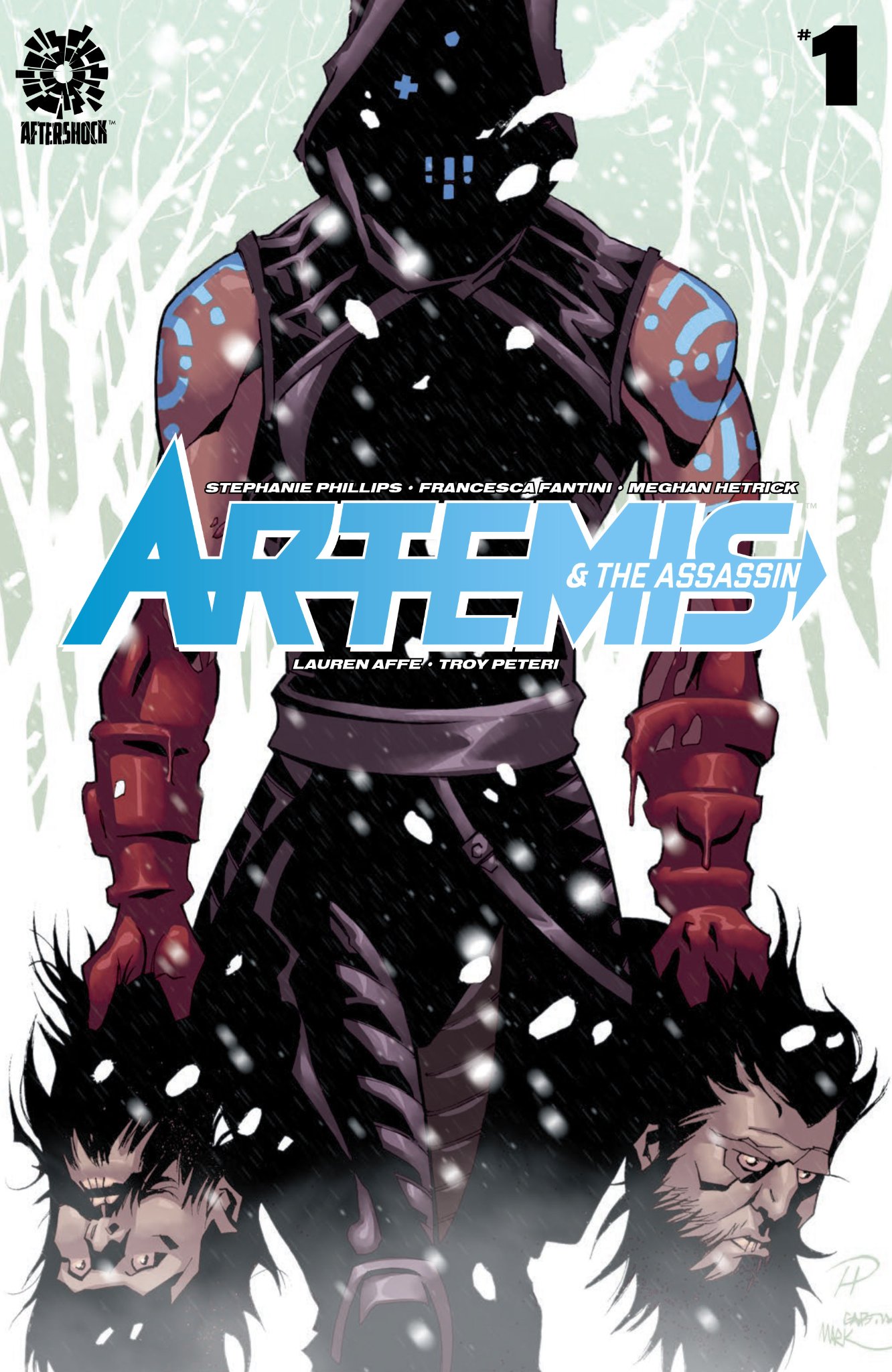 READ ON FOR OUR FULL INTERVIEW WITH PHILLIPS:

Monkeys Fighting Robots: First off, I LOVE the opening to this book and how Maya is introduced hardly saying a word. There’s so much characterization conveyed in just her body language and facial expressions. What appeals to you about a silent introduction like this, and how closely did you work with Meghan and Francesca to get it right?

Stephanie Phillips: I think it says a lot about Maya’s personality. She’s really a woman of action rather than talk. She’s there to get a job done and move on to the next one. She’s also a loner, so not seeing her with any kind of partner to banter with is important for her. She’s not sarcastic or funny. She’s a killer. And I think Meghan did a great job with the opening sequence of giving the reader a sense of this woman-of-action character that we’re going to see throughout the series.

MFR: I feel like I always learn something from your comics, from the existence of the Butcher of Paris, to the conspiracy surrounding the Lindbergh baby, and now to the life of Virginia “Artemis” Hall. Is that something you set out to do with your stories, teach your readers nuggets of history and inspire them to seek out the true stories?

Phillips: I appreciate you saying that! It’s really for me more than anything else. I am endlessly fascinated by people and I like to include a lot of that in my writing. When I discovered Virginia Hall, I knew I wanted to really introduce her to the world, perhaps in a slightly unique way. Like, in a time traveling kind of way.

MFR: ARTEMIS AND THE ASSASSIN is solicited as being “about the cost of changing history” — what sets it apart from other time travel stories with similar themes?

Phillips: The characters. There are plenty of great time travel stories in the world. There is time travel in this story, but this story is about Virginia and Maya. The time travel element allows for them to interact across time and space, and also pits them against endless foes. It makes for a great setting to throw these two characters into the deep end and see if they sink or swim together.

MFR: How much worldbuilding is involved in creating Maya’s future and the impact her agency has had on history?

Phillips: There was a lot more worldbuilding for Maya than any other character I have written before. Her backstory will unfold over a series of issues and is really unique. It’s hard to say much without giving it away, but I will say that building Maya took a really interesting blend of history and mythology.

MFR: You just announced another new book, RED ATLANTIS, also through AfterShock, and you’re working with Jan Neumann, former intelligence officer in Russia’s Federal Security Service. What is it like working with someone and building a story from his personal experiences as opposed to your own?

Phillips: It’s definitely a different experience having others involved in the story like that, but it has been a really positive collaboration. Like I said, I’m really fascinated by people and Jan is one of the most fascinating people I have ever had the privilege to work with and talk to. Honestly, one of my favorite moments of working with Jan was discussing fight choreography. I was Muay Thai fighter, so I approach a lot of my fight scenes with that specific skillset. Jan has some pretty extensive combat experience and training, so he helped impart a lot of his wisdom in order to ensure the fight scenes in Red Atlantis are truly authentic. He also offered to do a combat demo via Skype and I’m pretty stoked.

MFR: Troy Peteri has lettered most of (if not all of) your work; what about Troy’s work stands out to you and makes him the right choice for your projects?

Phillips: I’m really glad you asked about this. Yes, I love working with Troy! On some level, it’s really practical. I can use shorthand with him since we’ve worked together so much. But, I also elect to work with Troy because he’s talented and inventive. He is always looking for ways to make sure the lettering is adding something to the page, and he makes a lot of smart decisions. Lettering can make a huge difference with regards to how a reader interacts with the page, and Troy is one of the best at understanding the reader’s experience and laying out the page.

MFR: Finally, what are some of your favorite time travel stories that influenced the way you approached the time travel in ARTEMIS?

Phillips: Most of the influence for ARTEMIS really comes from pulps with a sense of big adventure and lots of action. But, if there was a time travel story that I love that I’m sure influenced this project, it would be A Connecticut Yankee in King Arthur’s Court by Mark Twain.

Thank you again to Stephanie Phillips for taking the time to chat with us. Call your local comic shop today and tell them you want Artemis and the Assassin #1 when it comes out March 18th.

And check out Monkeys Fighting Robots’ exclusive preview of the first issue here!