Review: BLOODSHOT #6 – The Second Act of a Generic Action Movie

Bloodshot #6 is the end of the second act of Tim Seeley’s run. Which the perfect way to speak about it, considering this series is building up to the Bloodshot movie starring Vin Diesel.

After the events of Bloodshot Salvation, Bloodshot is back on the run taking fights to numerous groups. One of which is the Last Flesh, a cyberpunk cult dedicated to augmentations so that they can inherit the world. Another is Black Bar, a black-ops sect in dedication to dealing with threats like them and Bloodshot. All of which revolves around Mina (a.k.a. Eidolon) a psiot who Bloodshot captured in his Project Rising Spirit days.

After being sold to Black Bar, she serves as the main weapon against Bloodshot. Only the leader Grayle treats Mina like anything human by allowing her to go out every once in a while. The rest of Black Bar however keep Mina on a short leash. Members of the Last Flesh meanwhile want to reclaim Mina having used her abilities to augment their physiologies. Bloodshot comes between these groups to rescue her with help from The Burned, a secret society of disowned soldiers.

Tim Seeley likes to make use of foils, like during his run on Nightwing. In Bloodshot #6 he has three groups of foils for Bloodshot: The Last Flesh (augmentations), Black Bar (black-ops work), and The Burned (rogue soldiers). In theory this does work, but there is so much in story, it feels suffocating. Black Bar in particular feels like just another Project Rising Spirit in how they treat Mina as a weapon. Then there’s Last Flesh commander Friday Dusk, who presents herself with only superficial similarities to Bloodshot. She can access memories through her implants but that’s it. Otherwise Dr. Dusk is just a manipulative dominator who quickly turns when she doesn’t get her way. 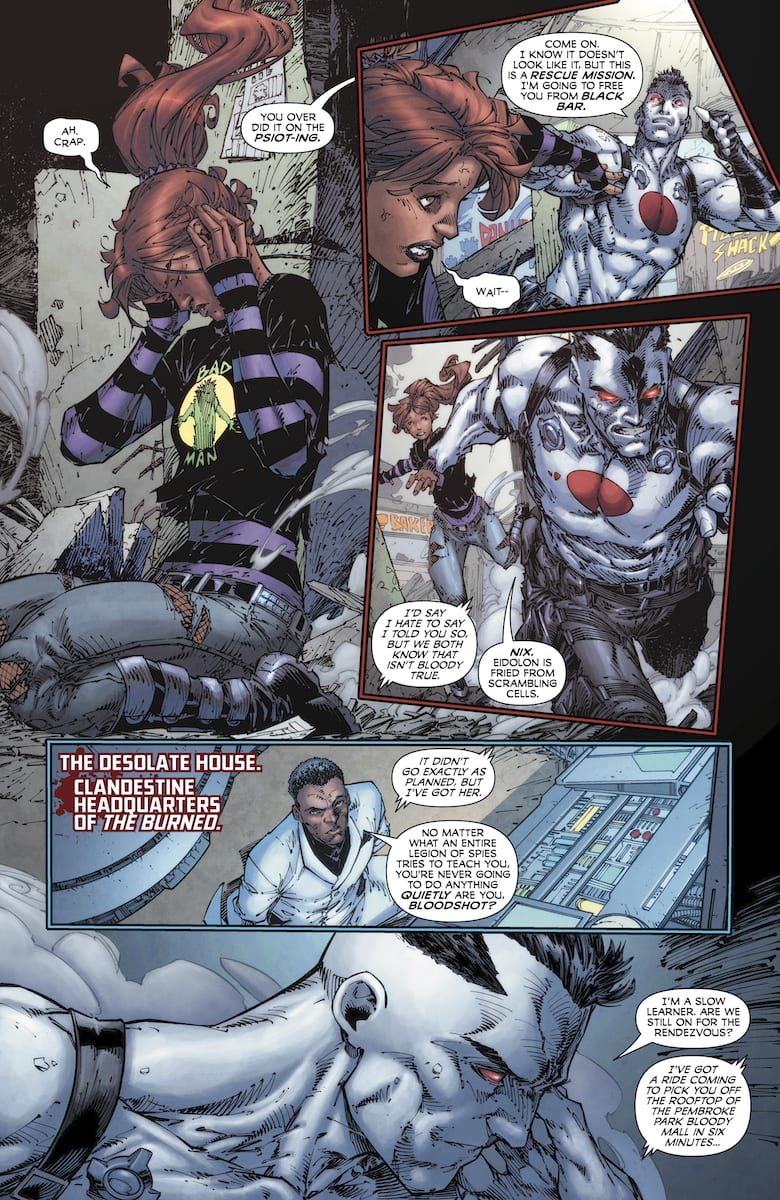 As for Bloodshot, there’s nothing all that interesting about him in this issue. Right now he’s just the guy shooting at stuff to redeem himself. When he acts up to scare pedestrians away about his killer reputation, it feels like he’s a stereotypical brooder. Bloodshot #6 continues to use this redundancy of his past for drama. Heck, his affiliation with The Burned is out of place. Bloodshot chose to leave his handlers, they didn’t leave him behind. Something Mina chooses to do as well despite the fact she should have more reservations about going with him. She kisses him for crying out loud! Now Eidolon just feels like a damsel-in-distress stereotype.

Brett Booth’s rough penciling does look impressive, as it befits the gritty outlook of the series. However with so much of his time focusing on dynamic poses, it sometimes looks like he’s trying to make cover art instead of panel work. Adelso Corona’s inking attempts to give focus on the action taking place. However, wherever there are bold lines, they’re usually reserved for close-ups. In the faux-pin-up artwork, some of the lines just barely blur figures from the background. Especially when their bodies have colors that would’ve blended in. Fortunately, Andrew Dalhouse’s coloring is the highlight of the artwork. Against some of the muted coloring appear bright blasts of energy. Occasionally the backgrounds shift to certain hues of color. From the green dust kicked up by actions near the beginning to red hues indicating dangers. 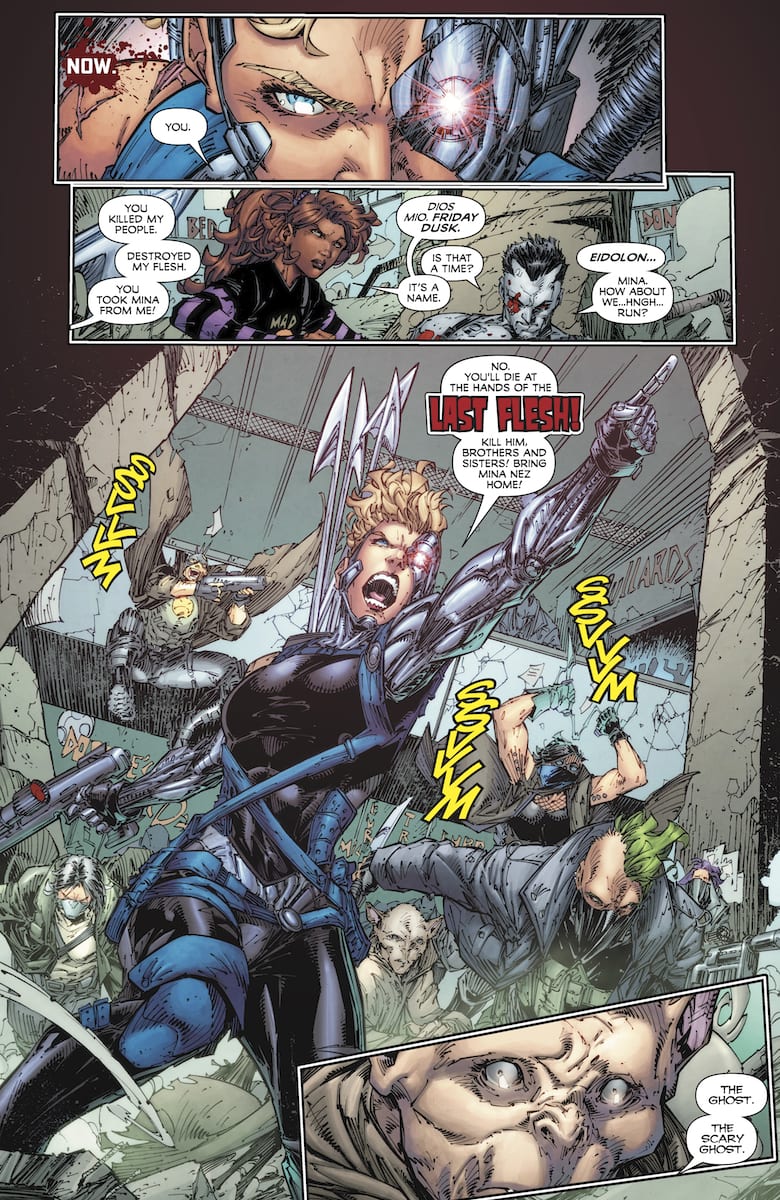 All things in consideration, Dalhouse and letterer Dave Sharpe have their hands full with other titles like Rai. It’s why some of the gunfire onomatopoeias look the same from that series and Roku: they’re images Sharpe seems to recycle. He does deliver some original pieces, like a very fitting sputtering wordmark for something very specific, such as Eidolon making Bloodshot’s skin explode (he grows it back). However Sharpe’s placement of word balloons demonstrate some of the flaws of the art. In one panel, it starts with Bloodshot complaining about the Last Flesh’s numbers before his gun is destroyed. It looks like the panel would’ve flowed better if it was flipped.

Every cliche about Bloodshot, like his past sins and his place in world, can get readers through this run. Unfortunately, this somber soldier is now just another action hero, including having an attractive woman at his side. Vin Diesel better not be anything like this. But do you have anything to say about this? Leave your thoughts in the comments.

Review: BLOODSHOT #6 - The Second Act of a Generic Action MovieIf Bloodshot #6 is what people are expecting the Bloodshot movie's second act to be, I hope the filmmakers can prove expectations wrong.