Review: RAI #4 The Threatening Stakes From All Around

Rai #4 out this week from Valiant Entertainment continues the story of the titular cyborg ronin. With a piece of the AI Father’s backups insight, everyone moves in for war. As if tensions were not high already, it looks like Rai is about to clash with an old friend and reoccurring enemies.

Rai and his “older brother” Raijin are on a quest to eliminate the Offspring, backup units of Father to prevent his rise to power. Along the way, Rai deals with how this journey affects those closest to him. People try to reach out to him, but this leaves Rai vulnerable to threats from Bloodfather. With an army of devout followers at Father’s feet approaching at every turn, the stakes begin to grow more desperate. 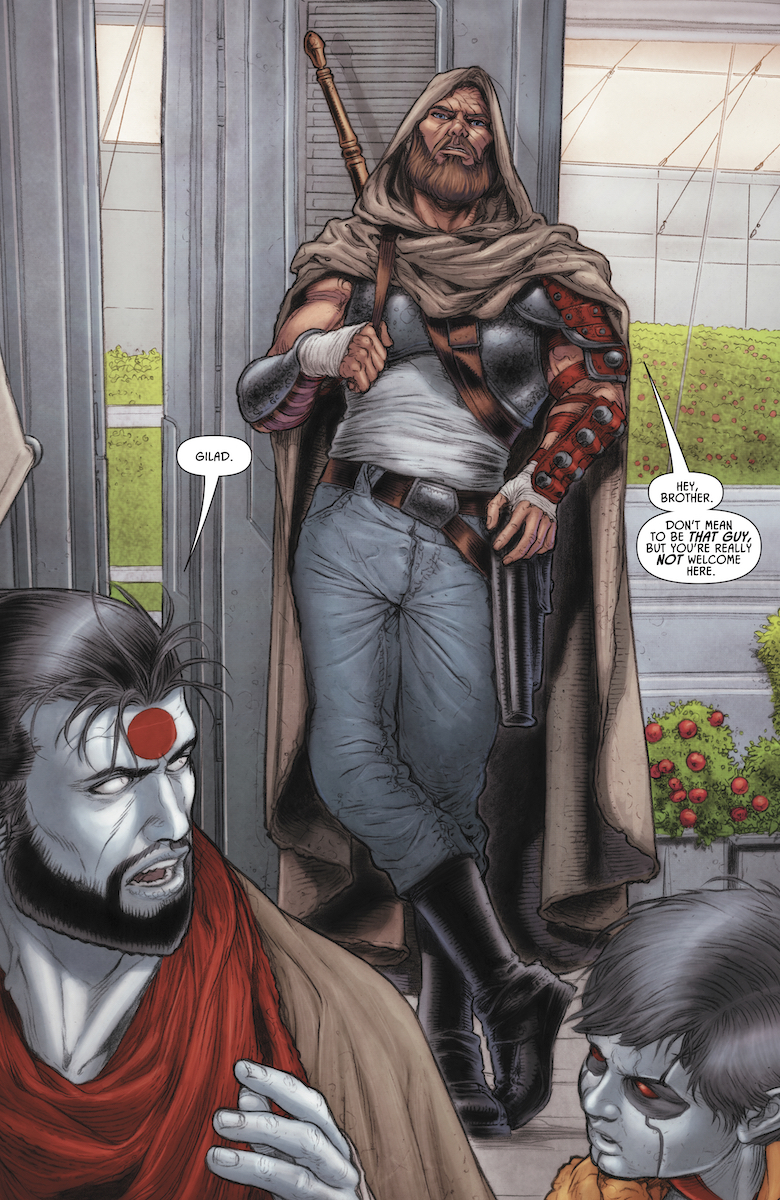 Rai #4 has the positronic brothers at a very difficult impasse. As Dan Abnett continues to point out, not everyone is happy with how New Japan is on the surface. The farming village the brothers arrive at, Hope Springs, holds it against Rai for allowing it to fall in the first place. But they make the most of it with the tech they salvage in order to make fertile soil. Which is why Gilad the Eternal Warrior and his geomancer ward take up residence there. After Fallen World left them in a difficult place, it’s nice to see them leave for what they believe is better. Unfortunately, with his vitality restored and his new home possibly compromised, Gilad doesn’t take well to their presence.

Every character who has a chance, Gilad included, points out Rai’s flaws when it comes to thinking in the long run. Gilad, in particular, sees Rai’s intense feelings when it comes to the threat of Father. He sees Rai’s quest as guilt for not being able to finish off Father, so much that Rai seems to take it out on Raijin for not complying. Even Raijin thinks that Rai’s fears might be unfounded when their objective is found.

At the same time, Raijin points out to the Geomancer Karana that despite his faults, the situation is not entirely Rai’s fault. Necessities like the fight against Father are short-term. It’s also why Gilad and Karana chose to leave the Green sanctuary, they were not necessary, and they hated the Green’s ways. Much like how Gilad hates the way Rai is doing things with both Raijin and finding the Offspring. But in the end, all of them aren’t that different, which is what makes the clash between Gilad and Rai so ugly. Gilad, much like Rai, is trying to balance his task with his humanity, but they both have trouble when something compromises those tasks. The attack on the village by Bloodfather’s forces might just make things worse. 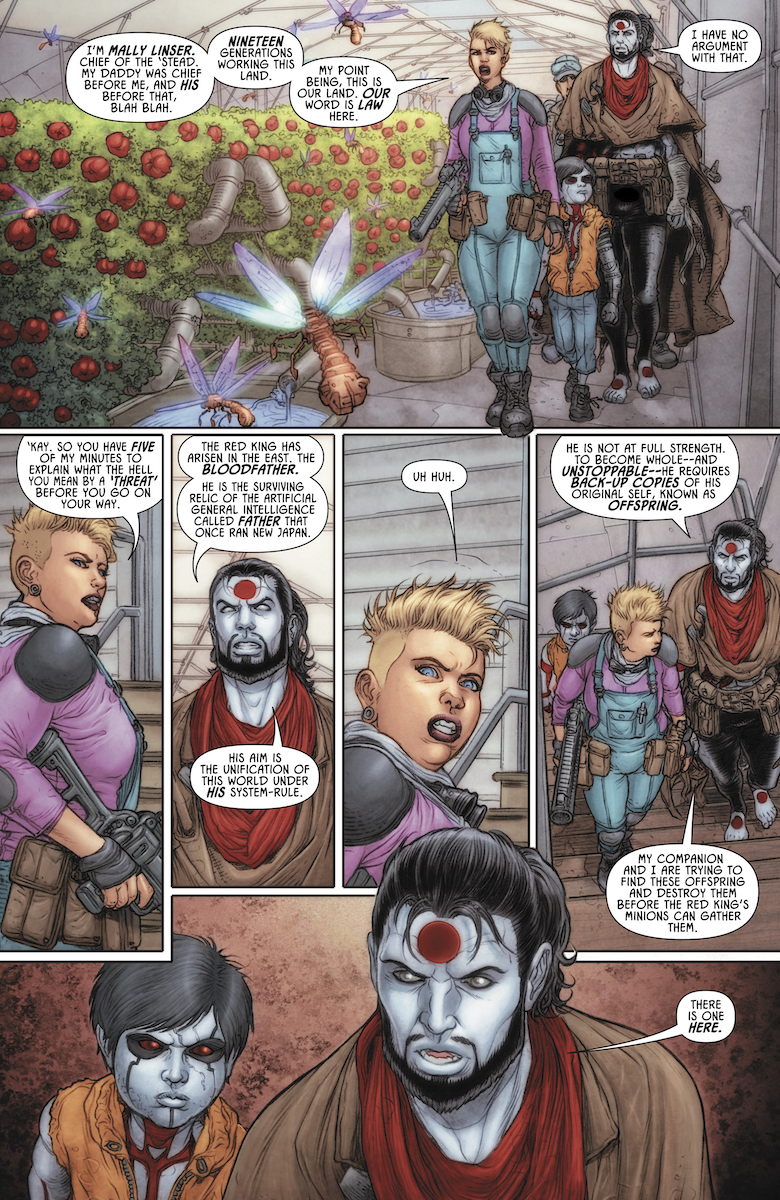 Continuing from previous issues Juan José Ryp’s penciling continues to give detail to the rustic but natural world of the future. Every wrinkle and expression feels alive in contrast to the smooth and faceless grunts of Father’s forces. The coloring by Andrew Dalhouse helps differentiate the more natural from technological. Even the wings of mechanical bugs give off radiance to show this. Situations like that play express a message that the natural can co-exist with technology. Unfortunately, the contrasting soldiers against the fields show the threat they pose to the world. In that way, it’s impossible not to get behind Rai when it comes down to it.

Dave Sharpe’s lettering, however, works best in Raijin’s diagrams that come before the main stories. Otherwise, they follow the standard and well-balanced flow of going between speech bubbles. The onomatopoeias meanwhile are diverse but are primarily stock images for the occasional punch and gunfire. A few wordmarks, however, illustrate some storytelling. For example, a blow by Gilad shows a wordmark that has no filling to illustrate Rai being knocked outside.

Prepare For War in Rai #4

Rai #4 brings up some extreme tension that proves Matt Sardo’s comparison of Dan Abnett’s epic with Game of Thrones right. Got anything to say about this issue? Leave your thoughts in the comment.

Review: RAI #4 The Threatening Stakes From All AroundThe stakes of are boiling in this issue of Dan Abnett's futuristic epic.