Rai #3 out this week from Valiant Entertainment is a surprisingly great jumping-on point for people who have read Dan Abnett’s epic beginning in Fallen World. From the vast world, the threats, and the themes all in one fell swoop.

Rai is on a journey to prevent the second rise of Father, a powerful AI, and his creator. Unfortunately for the cyborg ronin, he’s at a disadvantage. Father is possessing the body of Valiant’s cash cow, Bloodshot. Now father plans to regain his rule over life in the future world by finding backups in Rai’s predecessors. Doing so will bring him back to full functionality. With an army of devout followers and access to every digital communication at this Red King’s fingertips, Rai has to go analog. While this prevents Father from tracking Rai and his “older brother” Raijin, it also leaves them isolated from allies. Which is where the primary conflict comes from. 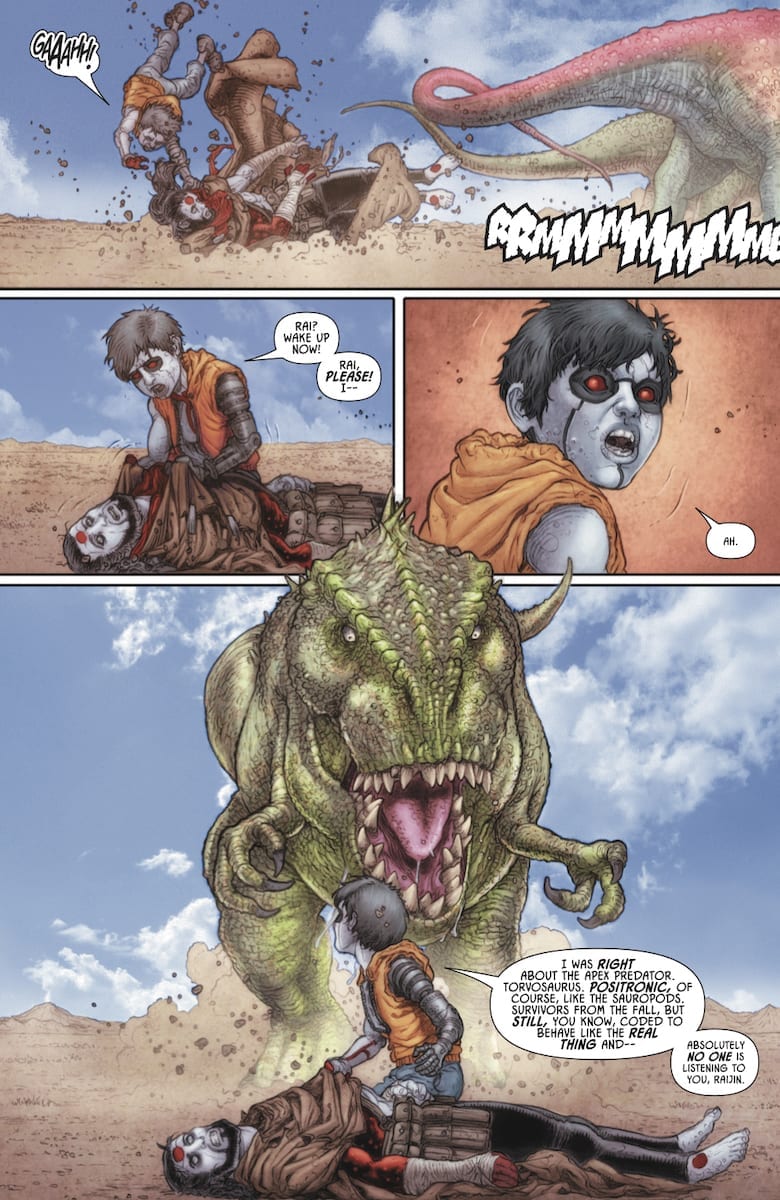 Rai, having cut himself and Raijin off the numerous networks have to track down whatever backups are left. But that leaves Rai’s allies unable to contact him, including his confidant Lula. It’s a piece that genuinely feels right with the plot, to either be a self-reliant human or use technology when it’s most appropriate. Raijin himself feels violated when he realizes what Rai did to them both. Because despite being more mechanical, he’s still a conscious being. With someone like Bloodfather around, it’s a circumstance that people will have to learn to workaround. Because ultimately, both sides are right in their own way.

The photorealistic art style made by Juan Jose Ryp pencils and Andrew Dolhouse’s color really help illustrate the settings. Unlike the art in Fallen World, this more rustic appearance helps tell the wild settings. Given the dusty wilds and the demented looking mindscape of Rai’s virtual world, it tells the story with the dialogue.

Dave Sharpe’s use of clever placement of word balloons guides the reader through the story. Then there are the diagrams that accompany the introductions, a great way to save time on exposition rather than bore people with words. What words there are in the diagram speak a great deal about perspective, especially since it highlights the machine-following Red King and his followers. Accompanying them are bright blue lights that contrast against dark backgrounds to highlight tension. As if the tensions in a vulnerable night or Rai’s troubled mindscape doesn’t speak it enough.

Rai #3 fills the quota of how every comic can be someone’s first, at least to a degree. Some people might need to have some background material before going into this. Because when they do they will see the transitions the narrative goes through. On its own it’s still a good read.