‘The Killing Joke’: The Most Shocking Thing Is How Disappointing It Is

How do you get a R-rating from the MPAA and never truly earn it? Just ask the creators of  ‘Batman: The Killing Joke‘.

Based on the controversial Alan Moore graphic novel of the same name, the film adaptation of this iconic tale honestly didn’t live up to the hype. The voice acting was outstanding and the animation was stunning but something about the entire piece just felt bland. ‘The Killing Joke‘ had so much to live up to and at times, it almost delivered but it didn’t go far enough. 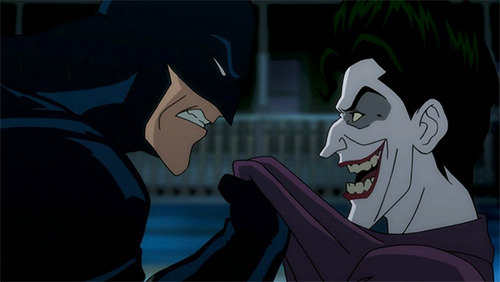 Possibly the most memorably shocking thing about ‘Batman: The Killing Joke‘ is the relationship change between Batman and Batgirl. Gone are the days where she is just a sidekick and now we get some sexual tension between the two. Many online have vocalized their distaste for the change and how it ruins the character but I thought it worked within this story. The prologue where these changes occur adds something to Batgirl; this was the writers attempt at humanizing her. What they did was turn her away from being a stereotypical young love-drunk girl into someone who is craving darkness in her life. It is a departure from the Barbara Gordon that you have come to know but it worked within this narrative.

Other than changing the emotional attachment of Batgirl, the film stayed close to the graphic novel. Even going as far as re-creating the most iconic scenes in some of the film’s most awe-inspiring moments. Seeing Tourist Joker with the gun in his hand at the door of Barbara Gordon on the big screen was an incredible moment for fans. Sadly, the ‘Killing Joke‘ stayed so true to the original piece that it never pushed the boundaries within the film.

“Sometimes I remember one way and sometimes another, if I am going to have a past I prefer it to be a multiple choice.”
-The Joker

Reading something and watching it have two different effects on you so they needed to be handled differently. That being said, the material handled within the graphic novel needed to be showcased differently in film format. Intensity needs to be heightened and the story needs more of a cinematic scope. Sadly, ‘The Killing Joke‘ movie just didn’t have the same emotional and shocking feeling to it.

I watch a lot of these animated DC films and I’ve grown used to the boundries they could push like director Sam Liu’s ‘Justice League: Gods and Monsters‘ but this didn’t push hard enough. Maybe they needed to go as far as showing more of the assault on Barbara or slip some animated nudity during the sex scene between Batgirl and Batman. Maybe the violence needed to be a bit more brutal or the language more foul. Writer Brian Azzarello boasted that he “added more controversy” but all that was there was weak thrills.

Another complaint with the project actually goes all the back to the source material. I’ve never personally cared for a Joker backstory. This backstory is in place as an attempt to show Batman that The Joker and him are exactly the same; both dark humans who just had one very bad day. A character like Joker needs no origin or added sympathy; he’s a sick and twisted man with no clear plan. ‘The Killing Joke‘ adds sorrow to the character as a means to explain why he is the way he is. There’s an odd juxtaposition in the story where on one hand, The Joker is a rapist/murderer but on the other hand, he is a man who lost his wife and unborn child. If the film adaptation would have left these flashbacks out, I think it would have flowed better.

It was great to have the acting of Kevin Conroy, Mark Hamill, and Tara Strong together again. And how awesome is it that a DC Animated Original Movie got an R-rating and a theatrical run? Even if it was just another average film for the studio, the fact that DC did such an amazing fan service like this is commendable.

Did you see ‘Batman: The Killing Joke‘ yet?

Let me know what you think about the film in the comments below!