Review: THE FLASH #85 Sees Preparation for the Battle against Cold

The Flash slows down to build characters

The Rogues have won. As the Legion of Doom has begun their assault on the world, newly empowered Rogues have taken Central City. The Flash Family is overcharged after the Death of the Speed Force arc, rendering them useless. Despite the valiant efforts of Commander Cold, most resistance has been crushed by Snart’s rule. This control continues for months until a surprising ally steps forward.

Led by Golden Glider, the other members of the Rogues have freed the Flash and his sidekicks. They now hide and prepare to defeat the frozen tyrant. Will Central City return to normal? 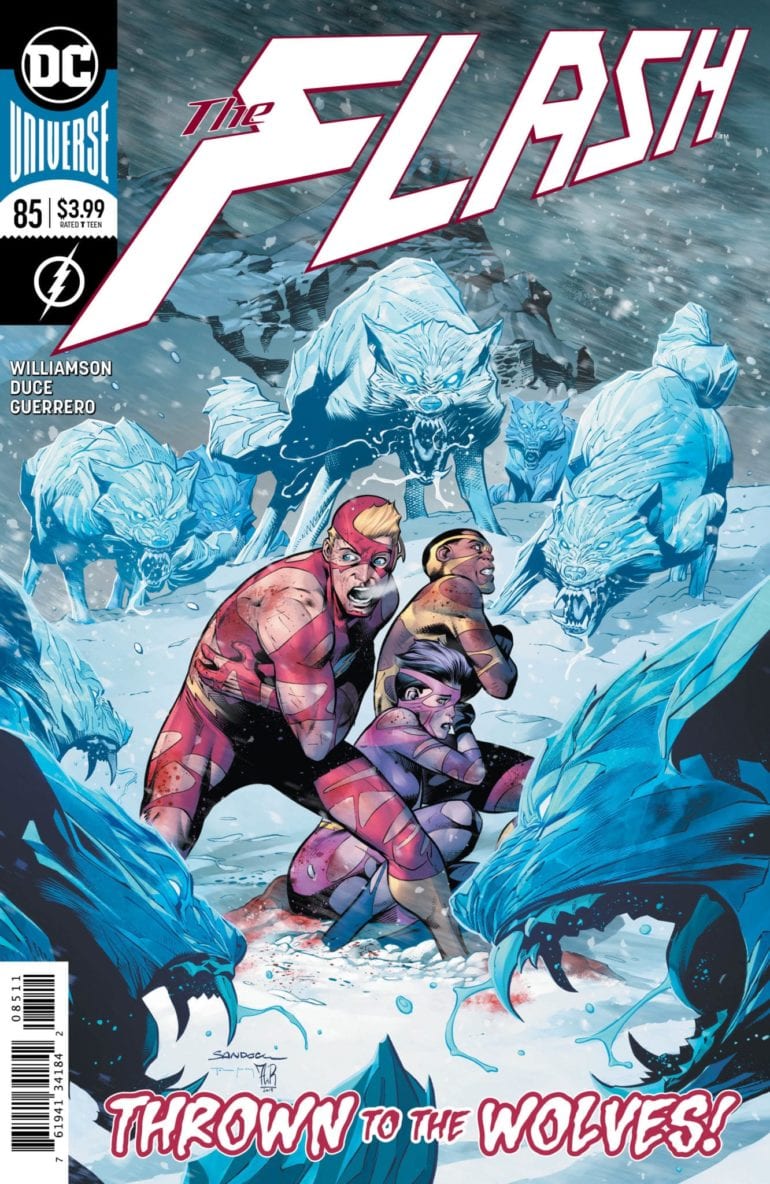 As the grip of “King” Cold tightens, the Rogues continue to train the speedsters. With their powers out control, Kid Flash and Avery Rely on the training and power dampening collars to keep them under control. Barry, on the other hand, has been struggling to maintain control without it. Golden Glider comes out to talk to him, explaining how the Rogues have been in the same shoes as him.

After a brief ice skating lesson, which helps understand how the speed force can be controlled, the teams come up with a new plan. To change the City back to normal, the speedsters and Rogues have to get the last pieces of Mirror Master’s Mirror. 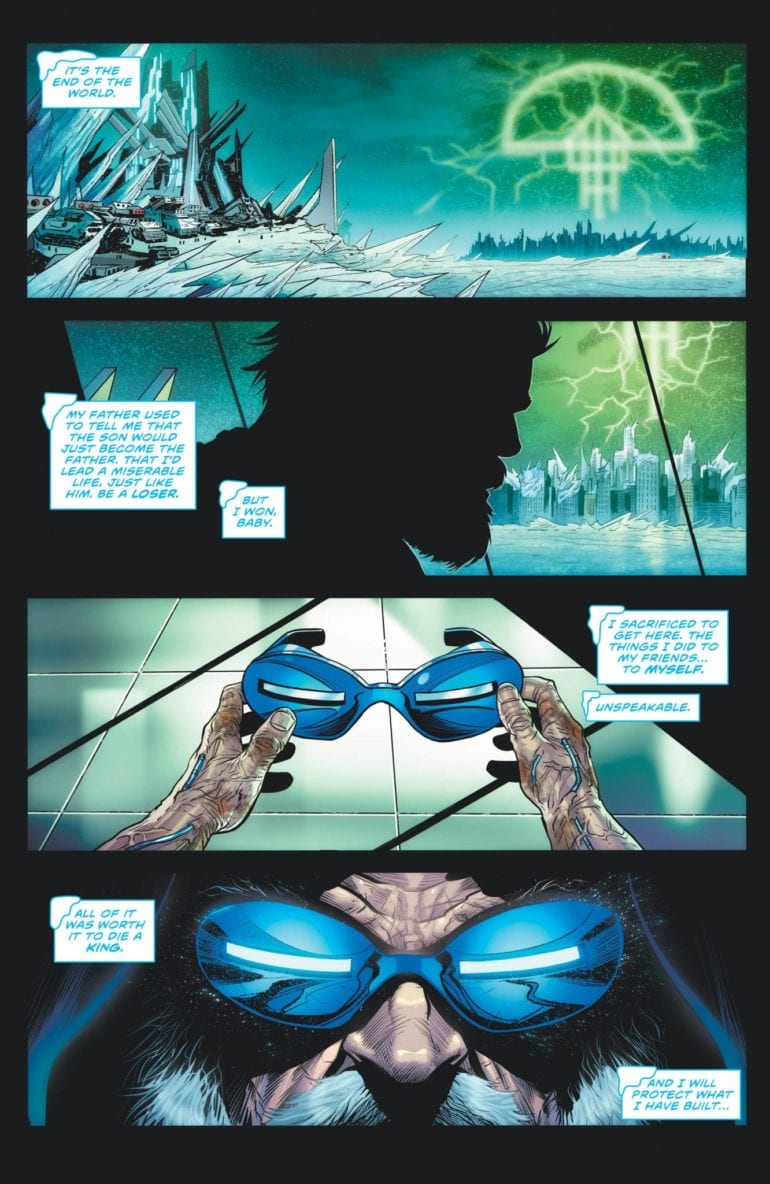 So while this has some action, the highlight of this issue is the humanization of the Rogues. The Villainous team has always been fan favorites to their blue-collared, more grounded view on the world. When they joined the Legion of Doom, I was worried they threw away this outlook. But this issue proves that it continues to be their defining trait. By the end of this issue, readers will see more connections between the villains and Flash than ever, learning to cherish them more.

The only problem I have with this issue is that Captain Cold has wholly left his character behind. With the other villains, they have these moments of redemption that allow readers to connect to them and hope they become heroes. In this arc, Cold has done nothing to make us root for his change. It’s a bad sign when the man who set his family home on fire gets more sympathy than Leonard Snart. There’s no doubt that he’ll change back before the end, but right now, he’s insufferable. 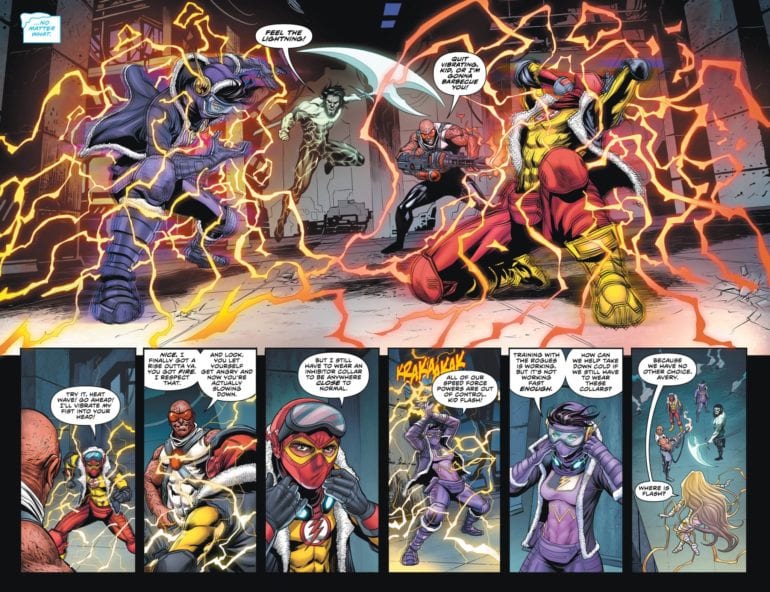 Christian Duce continues to bring his best work to the Flash series. Every page is an imaginative and sometimes epic feast for the eyes. With every character design and every cool action piece, Duce gives us more grounded, emotional moments. One of the best looking moments doesn’t come from an action sequence but with the ice skating lesson between Flash and Golden Glider. It’s very smooth and emotional for the pair, and you can tell through not just the dialogue but the illustrations. Luis Guerrero takes this great work even further with masterful, vibrant colorwork. Together, these two continue to deliver the best looking arc the Flash series has had. 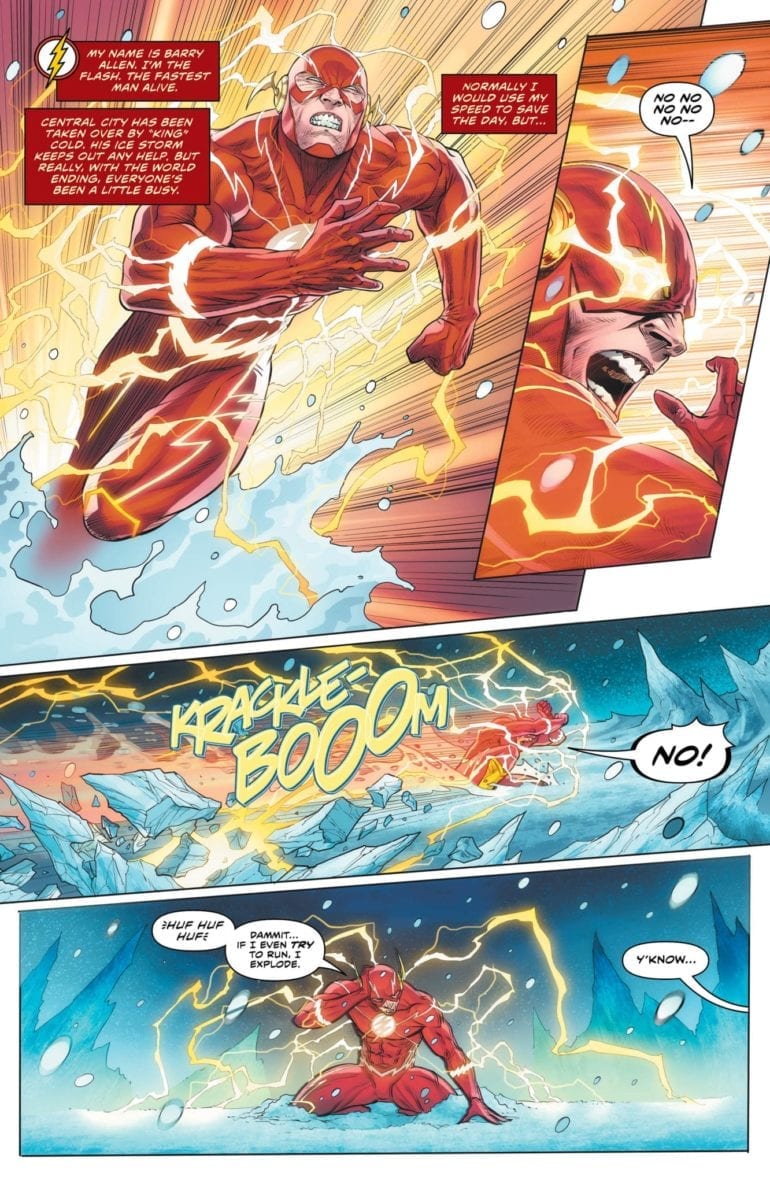 Overall, this issue does a fantastic job of setting up the final conflict against Cold. Not just in terms of action, but also giving us a slower chapter to attach to the characters. The Flash Series has always been known to have a more grounded set of villains, but by the end of this issue, you will hope they can get out of this fight on the right side of the law. As the weeks countdown for the end of this arc, it’s clear that this will go down as one of the more memorable issues in the current arc. With a promise of an action-packed battle to come, go pick up this issue today and see the preparations take place.

The Flash takes time to flesh out the Rogues in a quieter issue.Review: THE FLASH #85 Sees Preparation for the Battle against Cold