Scout’s Honor #5 finishes AfterShock Entertainment’s tense miniseries on May 12. Writer David Pepose makes this issue about the meaning of brotherhood in its best way. Luca Casalanguida, as series artist, illustrates all of the events in a gritty manner. Colorist Matt Milla gives scenes an intensity that gives way to levity, and letterer Carlos M. Mangual makes every action an extra bit of impact.

Pepose revolves Scout’s Honor #5 around the worst and best of brotherhood. As previous issues showcase, the Ranger Scouts uphold a very toxic system through deceit. The antagonist, Scoutmaster Shepherd’s son Dez has to hide who he is to fit in. But there was still value to be found, which the protagonist Kit epitomizes after separating herself from the toxicity. Her willingness to share the world’s bounty makes her someone to root for. This issue isn’t just the resolution of Kit’s character arc; it’s the beginning of Dez’s own arc by following Kit’s example. It all brings a real sense of a hopeful future in a post-apocalypse. 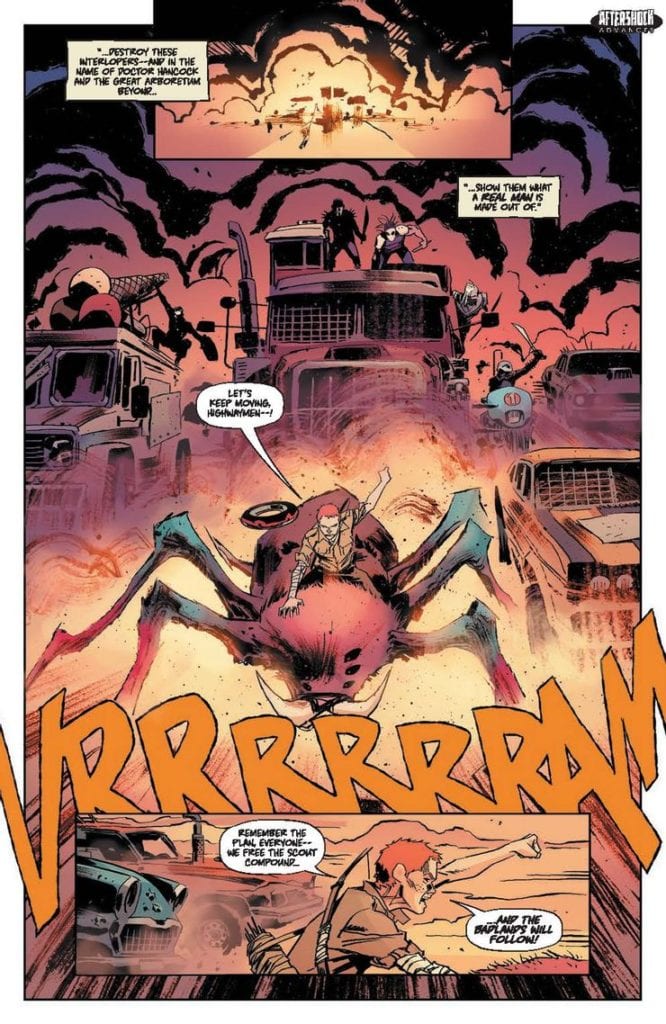 Casalanguida brings out the gritty aesthetic of the series to its limit. The Ranger Scouts strive to make themselves as unforgiving as the wasteland; so when the wasteland survivors the Highwaymen come knocking, it’s a clash of grittiness. Most of the pages have combinations of orange, red, and brown by Milla to demonstrate Shepherd’s desire to keep everyone in a state of conflict. By the end of the issue, the smoother art under a blue sky perfectly displays the plot’s resolution.

Mangual’s lettering enhances every action taken by the characters in Scout’s Honor #5. The hand-drawn look to them provides an extra layer of authenticity. The roaring of a truck and other vehicles feel absolutely loud when accompanied by the dynamic action scenes.

Scout’s Honor #5 gives this mini-series a gripping ending full of character progression. Among all of the grim undertones, it is genuinely nice to see people stand up to it all because that’s when authentic actions take place.

How did you enjoy Scout’s Honor? Leave your thoughts in the comments.

Scout's Honor #5 completes the arc of its compelling protagonist by bringing back a sense of hope for other characters to follow in a new status quo.SCOUT'S HONOR #5: Personal Honor Over Blind Faith