In AfterShock Comics’ Scout’s Honor #3, writer David Pepose puts the protagonist, Kit through a test of character. The art by Luca Casalanguida details this gritty situation while the colors by Matt Milla bring some brightness to these difficult moments. Through captions and sound effects, Carlos M. Mangual’s lettering brings a dramatic echo to every dire situation Kit faces.

Scout’s Honor #3 The Badge Of Courage

Pepose solidifies the reader’s support of the protagonist Kit after much build up from previous issues. With everything she does and her inspiration of the Ranger Scouts in question after some startling revelations, where does Kit have left to go? As it turns out, the answer is simple — nowhere but up. 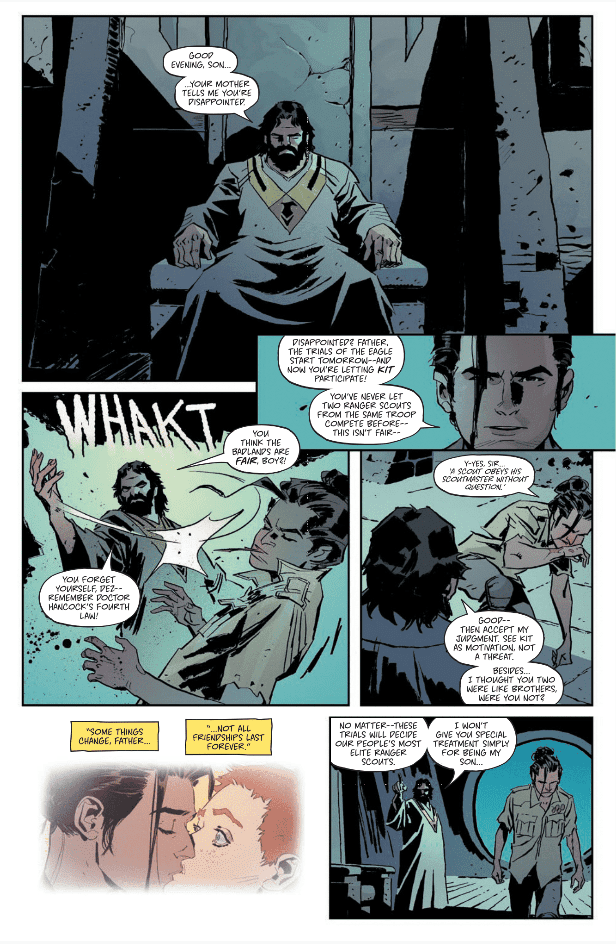 Throughout Scout’s Honor #3, Kit’s greatest challenge is the difference between strength and honor. Kit believes in the Ranger Scouts’ ideals that prioritize surviving in a post-apocalyptic world, but she’s against the “Boy’s Club” mentality. Her journey echoes that of her friend-turned bitter rival Dez.

In his attempt to live up to his father’s expectations as well as his own, Dez only finds disappointment and rejection. The reader can’t help but sympathize with him when his father, the Scoutmaster slaps him. That reaction particularly rings true when one considers that the Scoutmaster is anything but the honorable man he pretends to be.

Kit’s relationship with her father is quite different. He’s Kit’s inspiration for living. Even after his death in the series’ second issue, Kit holds him close. While she still keeps her guard up around the scouts, Kit maintains the values her father taught her without conforming to the scouts’ dominant ideals.

Smoothing Out The Grittiness

Casalanguida gives Scout’s Honor #3 a generally gritty style, aside from some important moments. The issue features an impressive amount of shading and detail to characters and terrains. Visually, it looks like the characters are trying to be as tough as the post-apocalyptic world they are living in. That toughness doesn’t seem to end very well when Dez almost gets killed when he tries to defeat an enemy.

By comparison, the smooth panels and the bright colors Milla uses for Kit’s scenes offers the reader a chance to catch a breath and relax in the middle of the aforementioned despair. 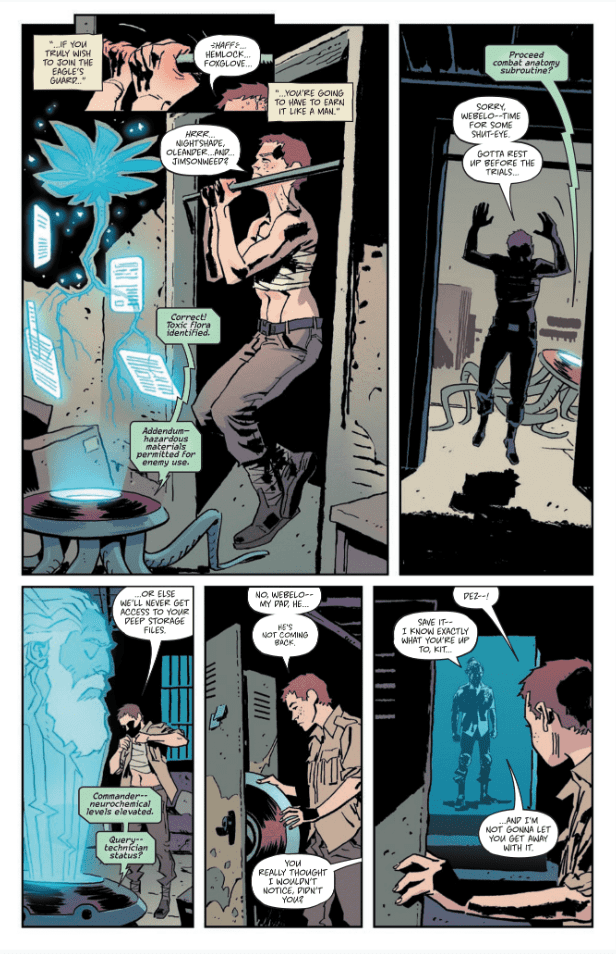 Otherwise, Mangual makes every action and word impactful in Scout’s Honor #3. The words of Kit’s drone companion, captured in green caption-like word balloons, is some of the only comfort she has. Its simplicity in its support of Kit is both comforting and sad, considering their bond stems from Kit’s role as the drone’s leader. Every other human connection she has ranges from plain to passive aggressive. Unfortunately, there’s nobody she can trust, other than a programmed drone.

Even cheers for her in repetitive sound effects don’t resonate with Kit, as they echo a lie she tells to be among them. Kit might have passed the scouts’ trials, but she had to pretend to be a boy to even qualify. This tension is exemplified by the scouts calling her “Brother Kit”. The reader feels Kit’s emptiness by sharing her awareness of her real gender.

Scout’s Honor #3 reaffirms the reader’s faith in Kit after losing this trust had been lost in previous issues. Now, it’s so easy to root for her because now the only thing she has left to lose is her honor. The other scouts clearly lack this desirable trait, so Kit stands out among the rest. Now, all she and the reader have left to do is see the series to the end.

Scout's Honor #3 approaches its climax with Kit displaying her aptitude and fortitude against the hard truths of what inspired her.SCOUT'S HONOR #3: Separating The Inspiration From Toxicity