The Battle’s Over, but the War’s Just Begun in RED SONJA #13

Dragan is dead. With the Zamoran forces defeated and chased from Hyrkania, one might think Sonja and her people could take the opportunity to relax and celebrate in Red Sonja #13, out this week from Dynamite Comics. Just because the fighting is finished, though, doesn’t mean things get easier.

With food and other supplies perilously low, Sonja sets out on a mission to the one place she should never return: Khitai. 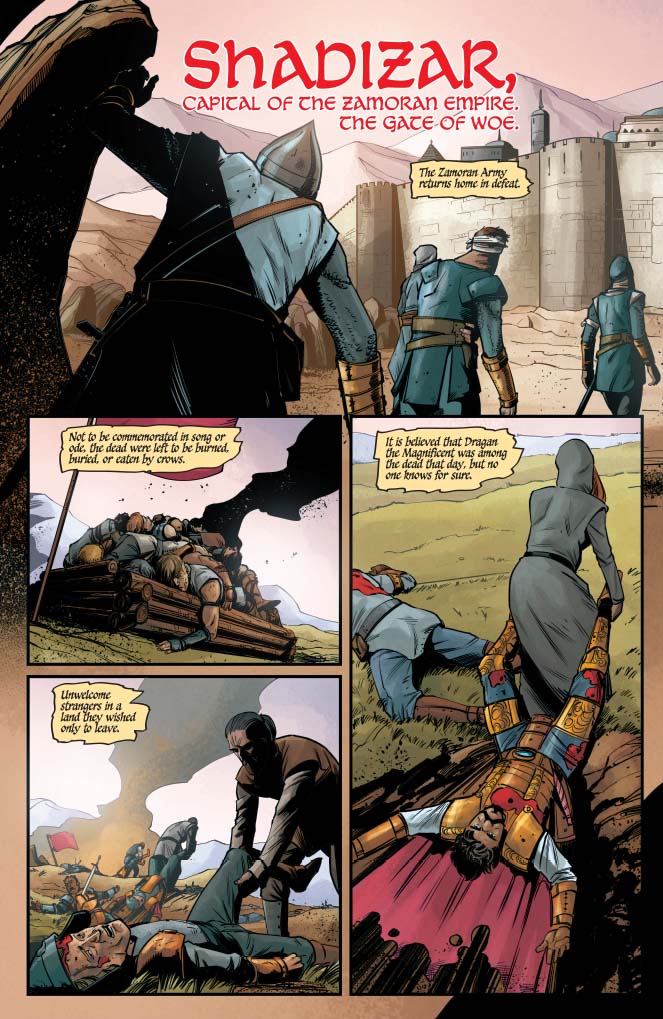 Despite the Hyrkanian victory, Red Sonja #13 opens with a quiet and somber vibe. A meditation on Dragan’s fate occupies the first several pages of the book. Writer Mark Russell notes that, while he may have once been the most powerful man in the world, Dragan is now just another corpse on a battlefield.

The effect of the mood is compounded by the gloom among Sonja’s council. We see the Hyrkanians dealing with the aftermath of their victory over the Zamorans, regarding it not a triumph, but simply a mutual waste of life. Despite the victory, their population is decimated, and their land, food, and other resources are exhausted, making the situation more desperate than ever.

Red Sonja #13 serves as a necessary transition point to pivot into a new arc. Much of the issue reestablishes the story and lays the groundwork for several potential conflicts. It takes on a somewhat expository role, catching the reader up on the current situation. So, while the book wouldn’t be super-engaging as a jumping-on point, it carries a lot of narrative momentum.

We see tension build as Russell lays out the interpersonal dynamics that define conflicts to come. The relations between Sonja and the King of Khitai, and those between Isolde and her Hyrkanian charges, form potential bases of this new arc. At the same time, we get some setup for the upcoming new series Killing Red Sonja, which focuses on Prince Cyril’s vendetta against the titular character.

Overall, Red Sonja #13 provides an excellent foundation for this new arc. It promises the same kind of complex and engaging storytelling we’ve come to expect from Russell. This new story should please fans of the series. 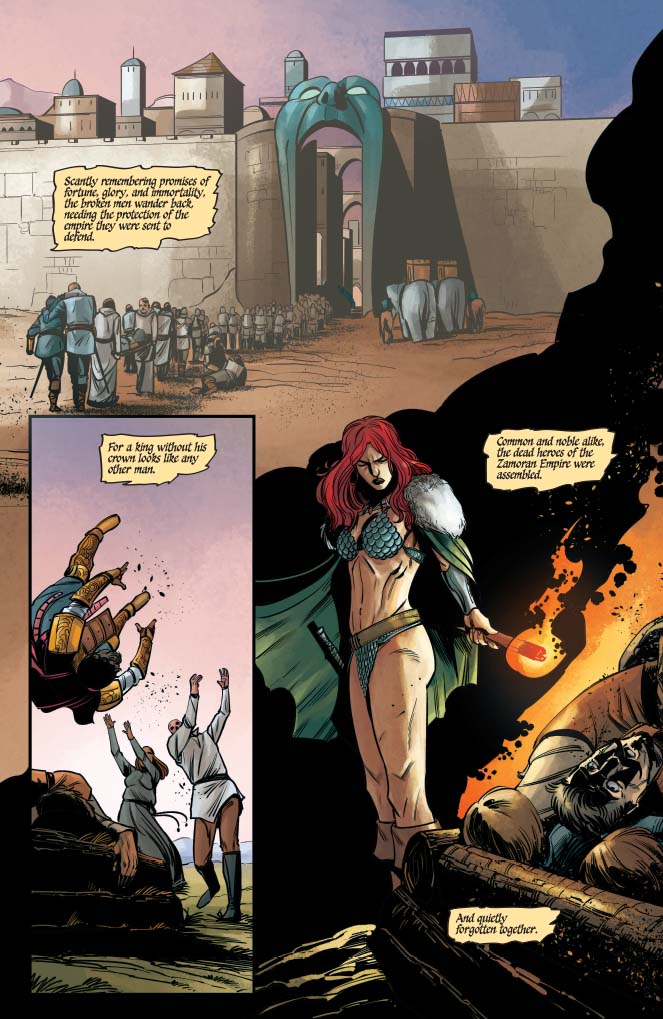 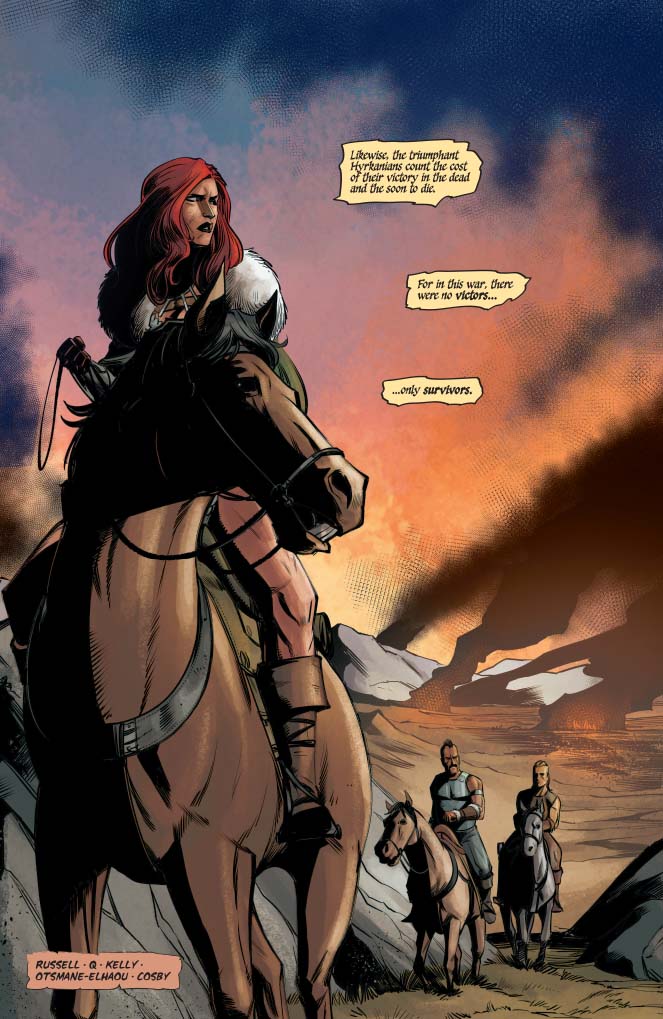 Bob Q provided artwork for a few issues in our first story arc, including the masterful issues Red Sonja #7 and Red Sonja #9. While not as stylized as Mirko Colak’s work, Q’s illustrations really shine in terms of their sharpness and detail.

Bob Q takes pains to meticulously illustrate minor background elements and scenery. This helps draw the reader deeper into the world of the book. There doesn’t seem to be as much purpose behind the page layout. However, the work still flows nicely and hits the story beats well enough. Plus, there are some impressive, dynamic illustrations throughout.

At the same time, he doesn’t skimp on the character designs, which are fluid and emotive. One can clearly read the emotion conveyed in a character’s eyes and facial expression, running the gamut from rage to determination to fear. Some of the gore can be a bit overly-cartoonish, but it doesn’t clash with the tone of the larger work.

Dearbhla Kelly is on colors for Red Sonja #13, bringing more of the earthy tones employed throughout the run. The style works well alongside Q’s more angular, detailed illustrations. It seems that the level of detail in the inks presents more opportunity for Kelly to explore a wider range of tones without sacrificing definition. 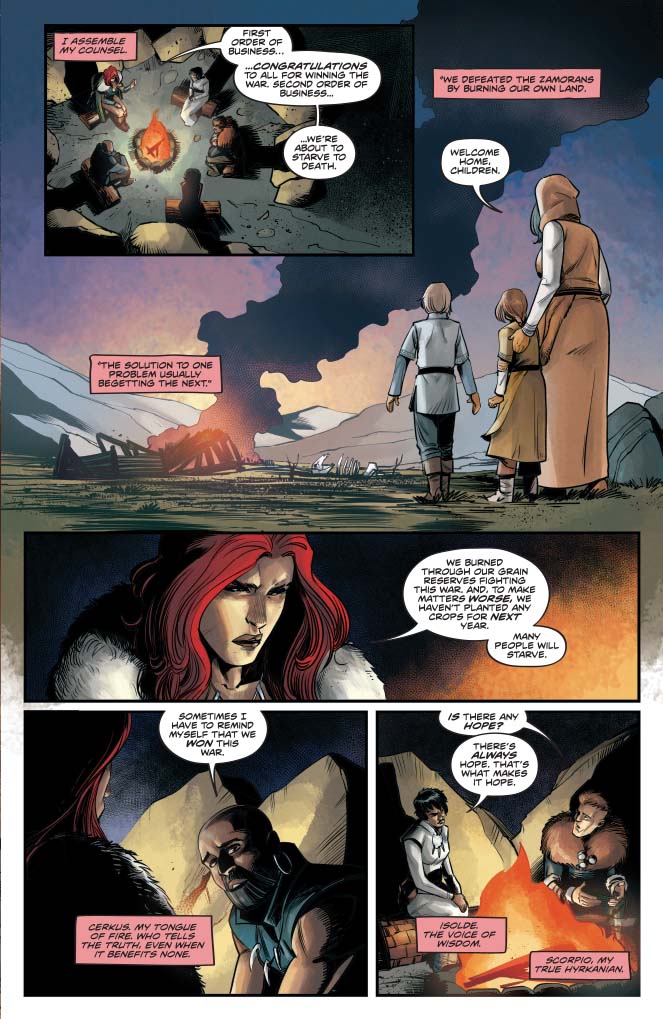 Red Sonja #13 offers a succinct and engrossing first chapter for this new arc. This book continues to be one of the most exciting ongoing series currently on the market. We’re excited to see where the creative team takes us next.

The Battle's Over, but the War's Just Begun in RED SONJA #13Red Sonja #13 offers a succinct and engrossing first chapter for this new arc. This book continues to be one of the most exciting ongoing series currently on the market. It will be exciting to see where the creative team takes us next.