Review: RAI #10 — A Conclusion Leads To A Haunting New Beginning

Rai #10, out December 16th, concludes this chapter of Dan Abnett’s science-fiction saga in the Valiant Universe. Art duties on this issue are split between Juan José Ryp and Beni Lobel, while Andrew Dalhouse and Dave Sharpe retain their respective coloring and lettering roles. 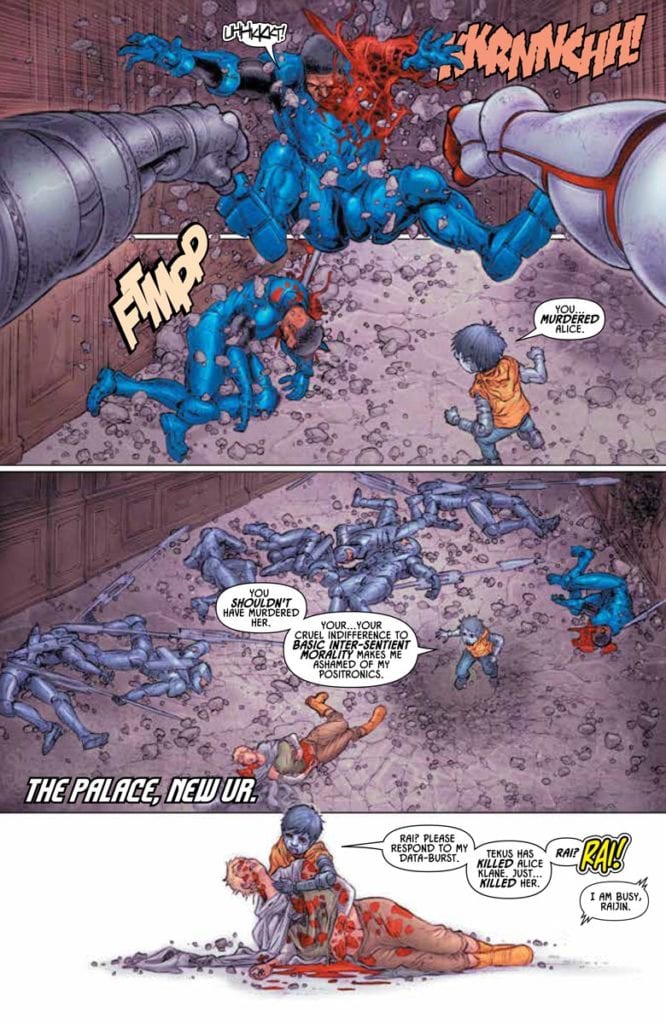 Within Rai #10 is a lot of anticipation both for what’s in the story and what’s to come afterwards. The opening pages call back to a conflict that stirs issues past, a conflict with technology and indifference. One of Rai and Raijin’s inner conflicts comes from how they want to live like humans, but they can’t deny that they’re part of their creator’s hold on the world. That same creator is a threat so severe that Lula has to abort her task on helping Bloodshot. But both conflicts come together near the end that will undoubtedly have the reader question the morality of the situation. Can beings of technology like Bloodshot and the cyborg brothers really live alongside organics? Or will they only destroy the memory of people like Rai’s companion Alice? Abnett leaves these questions in the air for the reader as the issue announces Rai’s return. 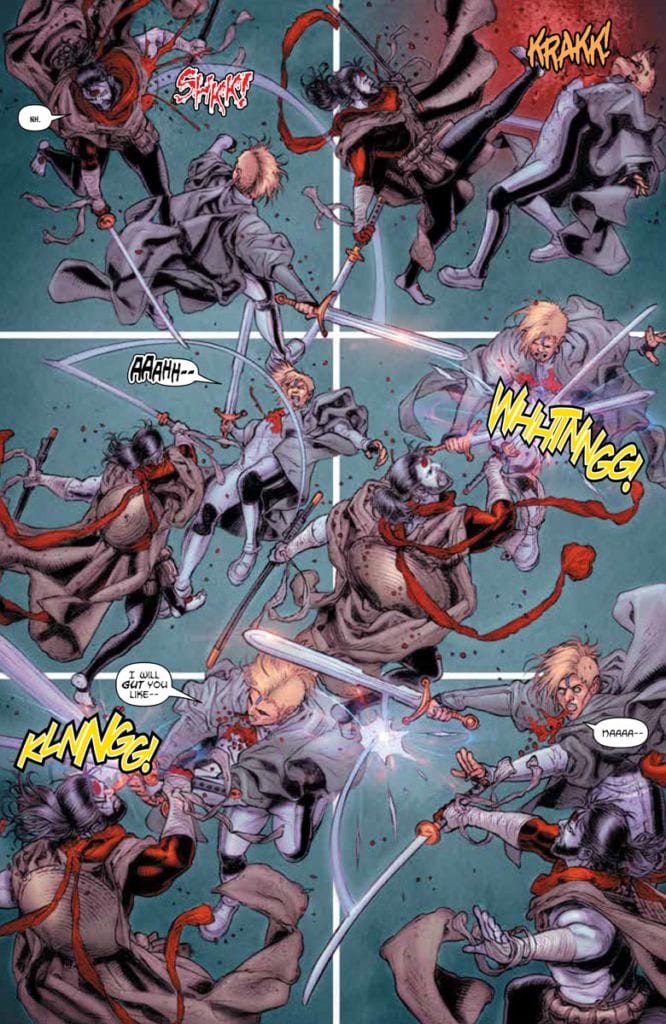 Ryp illustrates most of Rai #10, giving the action scenes a lot weight to movements. The use of afterimages displays Rai’s speed and strength above the average positronic android. It’s why the fight with Fusion is so notable, as every one of their movements can be followed by their body language. There’s no artistic licensing, just movements that the reader can follow to find the impact. Given the speed that Rai can go at, it makes the impact blows all the more impressive.

Then there’s Lobel, whose simpler art style contrasts with Ryp’s ultra definition. The two pages of Lobel’s art makes the fight from before lose half of its impact. Unlike before when each move looks telegraphed to give weight, the blows in these pages substantiate on speed lines on the borders; it’s almost like Rai and Fusion are rushing rather than fighting. Fortunately, the coloring by Dalhouse makes up for this by retaining the definition throughout. In Ryp’s fight scene, a splash of red heightens the impact of a kick by highlighting the speed it’s traveling. Then, in Lobel’s scene, the wrinkles of a coat are visible without lining and a glimmer of light of a sword. It’s that kind of consistency in color that allows readers to follow through despite Rai #10‘s sudden shift in artwork.

Words As Loud As Actions

Sharpe’s lettering gives impact in every page and panel in Rai #10. Making use of his stock wordmark images, the little changes make each action feel unique. Even the grunts in Rai and Fusion’s fight leads to the intensity of their battle. All of this leads to one wordmark that looks in dedication to a splash page marking the end of their fight. Sharpe also takes the opportunity to give characters a distinctive voice through fonts and word balloon coloring. Fusion’s classic font implies an older dialect, while Bloodfather’s red outlined word balloons gives off his fierce and commanding voice. Each word and little noise feels authentic and gives every moment twice as much impact.

After such a climatic battle and major developments, readers have to wonder what’s next. Everyone involved in Rai #10 puts so much work and dedication to their craft, it feels shameful to leave things on a cliffhanger. Only time will tell what the next saga of the Valiant Universe’s future will display. But until then readers will be pleased with this chapter opening new possibilities.

RAI #10 concludes with a conflict ready to brew over into an even greater world — one that the cyborg ronin might be willing to accept.Review: RAI #10 — A Conclusion Leads To A Haunting New Beginning