Rai #5 shows the conflict brewing from the last issue becoming bittersweet. This run isn’t even finished with its arc, and now the reader gets a first look into the effects of war.

In the last issue, the cyborg ronin Rai and Raijin find an inactive piece of an Offspring. The Offspring are essentially backups for the central AI of New Japan that controlled everyone’s lives, Father. Rai not wanting to take chances of Father returning to full power wants to destroy it. Unfortunately, the offspring piece is crucial to a terraformer a farming colony uses to fertilize their fields. Gilad the Eternal Warrior having his vitality restored thanks in part to this terraformer and not liking Rai’s attitude threatens him. Only for an army of Father’s followers to move in destroying everything in their path.

Rai #5 displays the threat of Bloodfather in full view. This extends to his soldiers who he outfits with nanoware derived from Father’s host Bloodshot. As it turns out, despite how the last issue showed, these troopers show doubts in destroying the farms; they are actually not in control of their actions. Father actually controls them through commands issued by the nanotech. Something that his host Bloodshot spent a lifetime avoiding. Anything that isn’t his, the Red King would rather destroy as this represents alternatives to his rule.

Dan Abnett shows a high amount of expertise in continuity with Rai #5. Something that, unfortunately, is fully appreciated best by people following Valiant. For newcomers it’s still good, but a little background knowledge is necessary for Abnett’s epic. Because readers just can’t forget or ignore crucial details like the way Rai goes about his quest. If they do, they lose what makes a long-running story great. Every piece counts, no matter how little. 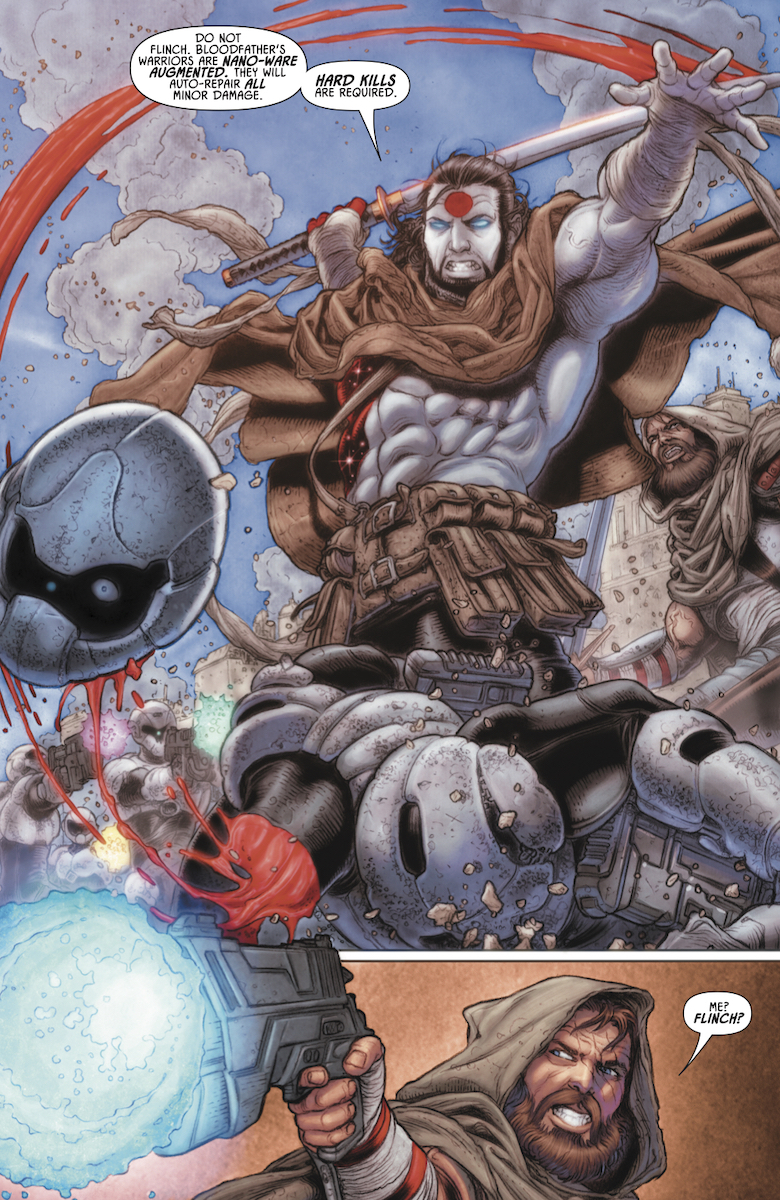 Juan Jose Ryp continues to provide his rustic yet highly detailed artwork in Rai #5. This makes the battles feel tense with expressions that display the severity. Not even the Red King’s troops are exempt from this when an eye can be seen through a visor.

Andrew Dalhouse’s colors provide just the right amount of shading, lighting, and color blending for this issue to feel realistic. Even the science fiction bright aesthetics show how dangerous an object is to someone. Whether it is a blast from a gun or the blade of Rai’s katana, bright means blight. Meanwhile, some of Gilad’s battle scenes get red with bloodlust.

Dave Sharpe’s lettering feels very fluid and in place with every panel in Rai #5. When he’s not making too many special effects onomatopoeias, the issue feels free of distractions. When they do happen, Sharpe makes the sounds stand out by displaying the effects the action has on something instead of the action itself. The laser guns don’t make sounds themselves, but blowing through the head of a farmer does. But it does get confusing to a reader when they see a similar act a page later. In some very specific circumstances like when Gilad cries out, Sharpe even displays how word balloons can’t contain his rage by making the word bigger.

Catch Up Before Rai #5

Rai #5 is a reminder for all the drama that readers can see in short bursts, there is a bigger story. Every piece counts, but some work best as a double feature. Put this together with Rai #4 for a decent mini-arc.

Reivew: Rai #5 - A Battle Best Accompanied With Last IssueEvery piece of Dan Abnett's epic future story counts. Readers just need to enjoy as much as they possibly can.