RAI #8: Safe Spaces Can Be More Risky Than Danger Zones

Rai #8 continues the cyborg brothers Rai and Raijin’s journey to destroy their AI creator Father’s backups, the Offspring. Rai’s single-mindedness in this quest, however, puts his social situations at tense times. Meanwhile, Rai’s ward, Spylocke, has made contact with Father’s current host Bloodshot. 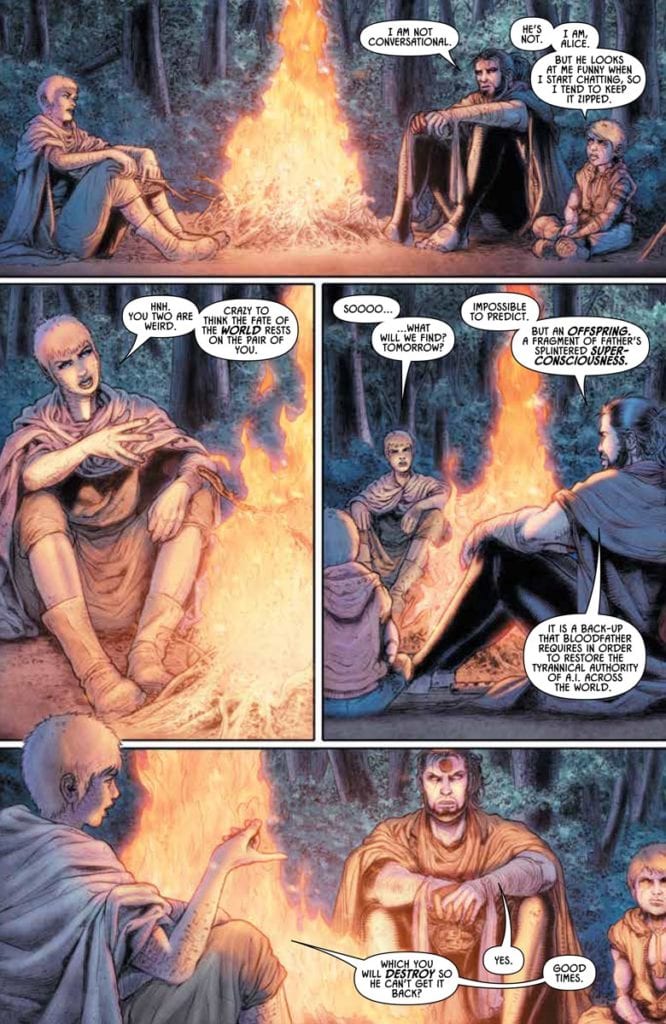 Abnett, in just the opening pages of Rai #8, displays the outline of the arc’s tensions. Despite being on a quest to destroy a tyrannical AI, Rai is not a very social person. Rai and Raijin’s guest traveler Alice from the last issue does not seem to have changed her opinions regarding them. But even then, she doesn’t judge or berate either of them. The reader then views Fusion, the leader of the positronic android community of New Ur. Despite how welcoming and social he seems to the three, he constantly dodges questions about who he is until it suits him. Near the end, it becomes extremely apparent that Fusion is toying with them. And yet another character from the last issue, Tekus, willingly takes Fusion’s side because Rai refused to help their old community. That’s despite the fact Tekus’ new home is only for Positronics, unlike his old one, where both humans and positronics lived in harmony. Because when there’s a threat that can turn humans inside out, the safer option might be a regressively ugly one. With the issue’s release at a time of real factionalism taking place, it’s all the more blood-curdling.

The B-Plot of Rai #8 stands in contrast to safety from a threat. Spylocke, despite every one of her instincts telling her to cut and run, remains to help Bloodshot. The datastream is a dangerous place for her as Father could destroy her form and mind with his security. Yet Bloodshot’s remaining consciousness remains a safe place for them. But even then, it’s only temporary until both Ray Garrison (Bloodshot) and Lula (Spylocke) can escape. It’s actually rather hopeful as they put one another’s fate in each other’s hands. 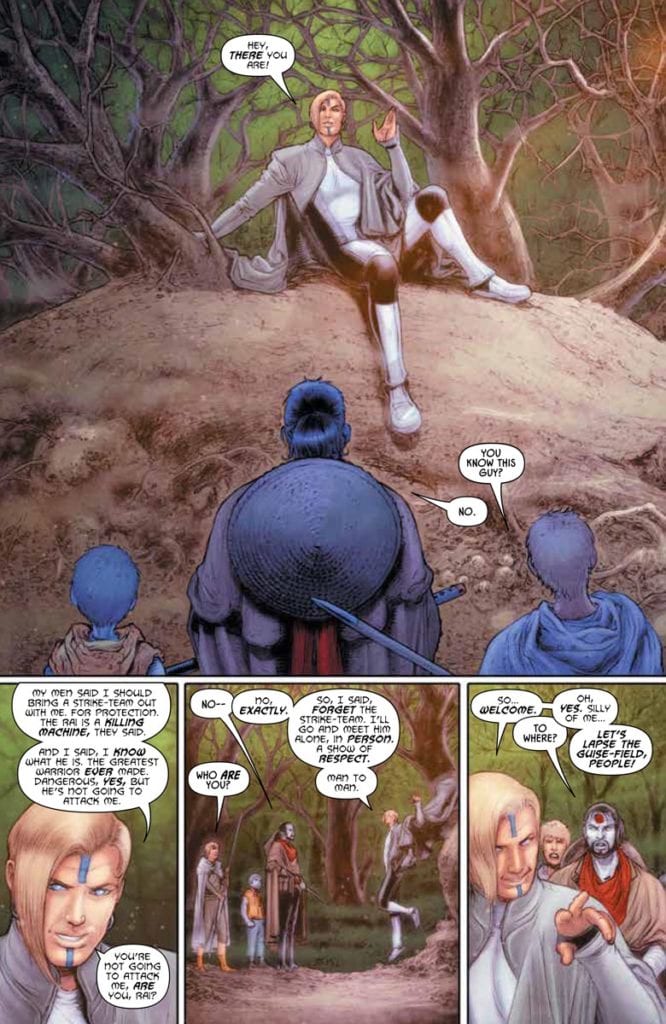 Juan Jose Ryp’s rough but naturalistic artwork makes the above situations all the more tenuous. The trees, fire, and soil of the wilderness look uneven but feel serene. All of that changes with Fusion’s introduction; his relaxed posture and high position give way to a more even change of scenery. However, after a decent first impression, the orderly even architecture and guards make New Ur feel more like a trap. What’s worse, the bright coloring from Andrew Dalhouse helps mask the illusion of safety.

Compare this to the B-plot of Rai #8, every place in the background looks chaotic and abstract. Yet the space between objects is rather neutral. Unlike when pixels suggest something dangerous like the sharks sniffing Spylocke’s trail or how the background pixelates to show her fright, standing in a pixelated rib cage doesn’t feel safe in this case. Until this becomes apparent as a form of camouflage from predators, Lula’s relief is a mutual feeling between her and the reader.

Dave Sharpe’s lettering in Rai #8 does quite a lot to set the mood of settings. Most of the dialogue conveys the situations between characters, and it’s the subtle changes that make a big difference. When Fusion speaks with more archaic letterers, it’s a display of how sophisticated he speaks and how high and mighty he implies. It’s something he shares with his followers as well. Then there are Spylocke’s captions that display her inner thoughts completely detached from her actions and spoken dialogue. They convey both an inner turmoil and enhancing her amazement at things like Ray’s personality doing everything to speak to her. Which is a lot considering most of what Bloodshot says is short but with a lot of effort to convey how dire his situation is.

Venturing Into Forbidden Territory With Rai #8

Rai #8 doesn’t just continue the journey of the title character; it acts as a buffer of dire situations. Characters that readers grow to love see what they struggle with as they try to fit in with the world. But sometimes, the world can lure them into a false sense of security. However, even the most dangerous places aren’t devoid of hope. This is just the turning point to a major development in the saga, best to stay tuned for more developments.

Rai #8 brings readers into an intense situation that can lure them in to keep them on their toes. But it's also a time of taking a major step forward.RAI #8: Safe Spaces Can Be More Risky Than Danger Zones