From comics icon Grant Morrison and writer Alex Child, with artist Naomi Franquiz and colorist Tamra Bonvillain, comes the second chapter of a politically-tuned and teen rebellion-driven supernatural horror-comedy. “Proctor Valley Road” #2 is a knife-sharp and wickedly funny comic full of period-accurate political focuses and a group of kick-ass teenage girls who are all their own unique characters. With a killer script and stellar visuals, this 2nd chapter has be hooked on this new series.

“August, Rylee, Cora & Jennie are the prime suspects in the disappearance of the missing boys, but the authorities have no idea what monsters roam the Proctor Valley Road.  As the town – and even their families – closes in on the girls, August makes a choice to visit that haunted road one last time.  And even if she survives, an even greater threat may have its eyes on these four friends..” 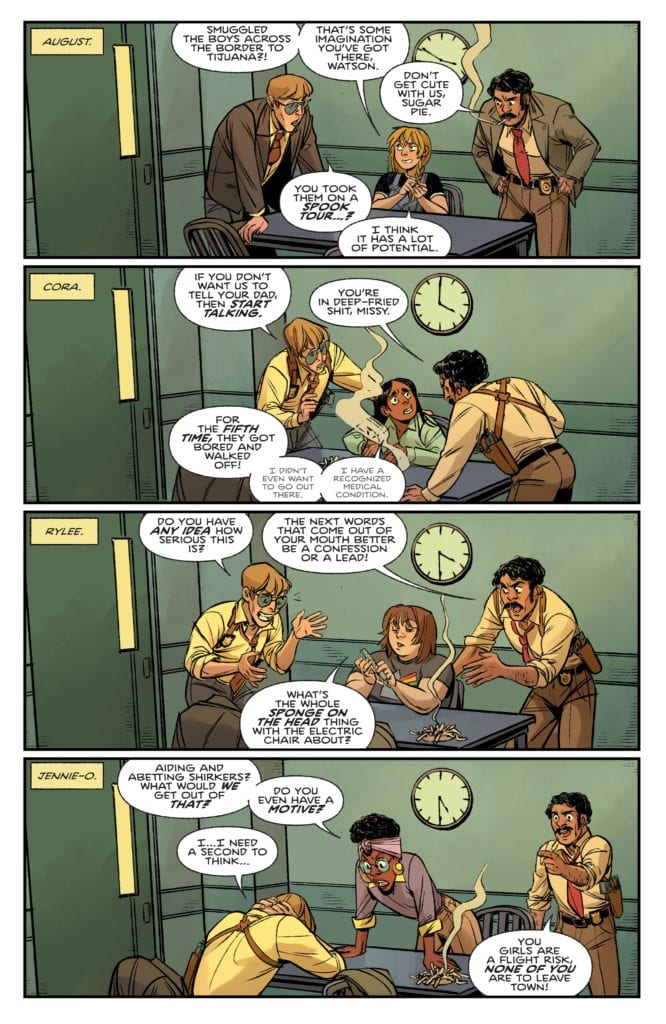 What makes Grant Morrison and Alex Childs’s script for “Proctor Valley Road” #2 so much fun is the mixture of realistic-feeling teenage characters enduring the turbulence of the late 60’s/early 70’s with the mixture of some good ol’ supernatural horror. The main cast consisting of high school girls August, Rylee, Cora, and Jennie are all written spectacularly well, with each of them carrying a completely different personality and set of interests while still making it apparent that their friendship works. Much like the comic’s obvious influences (The Goonies, Stranger Things, etc.), the group are all social outcasts with individually turbulent home lives. Their families don’t really know how to handle them, so they often find their own ways through living in their town – which is what lands them in trouble in the first place. The angle at which the socio-political climate is addressed as well is clever. From the perspectives of the teens, the issues being discussed here are obviously relevant to the time (the Vietnam war, lingering post-segregation racism), they are handles in such a way that makes them feel relevant to current issues without beating you over the head. The horror elements take a bit of a back seat to the interpersonal and political goings-on in this comic, but there’s a cleverness even to that. The story is structured like a horror film from this time period, with suspenseful bits leading up to the big horrifying reveal (there are some horrifying reveals here but not *the* reveal). This allows the characters and world to take shape and flourish while the supernatural threat takes shape in the background. The other big clever bit to the comic’s backseat approach to the horror: the protagonists are basically kids. The weight of mortality and the incursion of reason that adults have hasn’t really hit these girls yet, which is why when the big spooky stuff comes along it’s a big deal – but it isn’t exactly earth-shattering. This is a brilliant script that makes me immensely excited to see where this comic takes me. 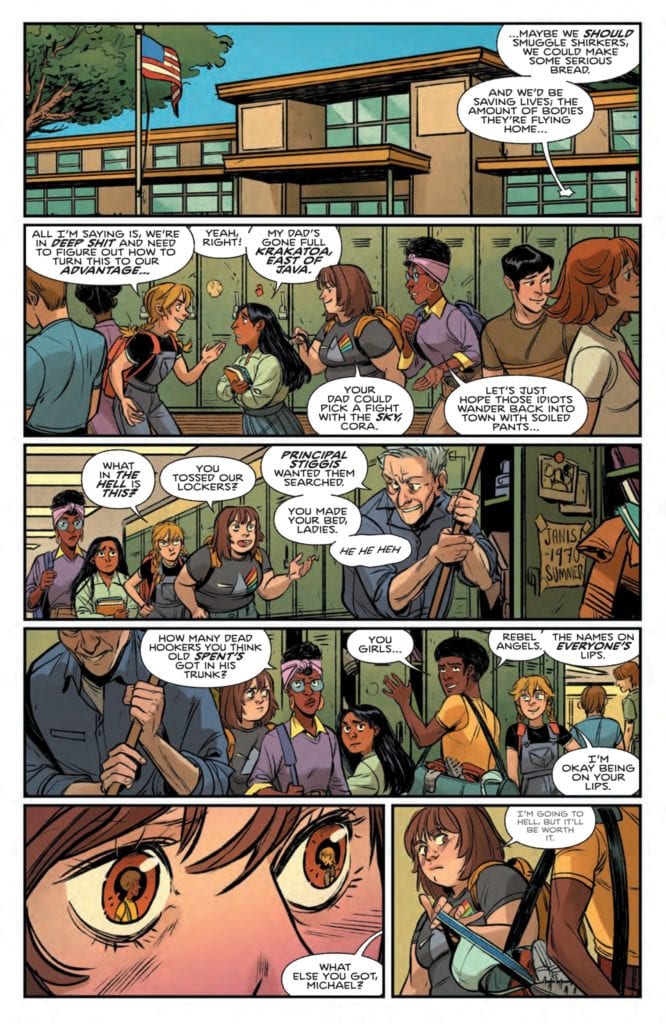 I was a huge fan of Naomi Franquiz’s artwork when I first happened upon it in Tales From Harrow County, so I knew I was in for another treat upon seeing more of her work on “Proctor Valley Road” #2. Her eye for character animation and detail makes this cast of characters immediately likeable and relatable to the reader, with their personalities painted across their faces in each and every panel. Their attire is smartly put together too, as it’s attuned to their personalities as well as their age. Franquiz builds a fantastic view of a quiet desert town in 60’s/70’s California as well; the sand-worn houses and period correct cars all function as dead giveaways to the story’s setting but manage not to date it in any negative fashion. The colors from Tamra Bonvillain are the real key to this book’s aesthetic though. The mottled reds of the desert sun that paints the town during the day fades into a headlight and bonfire colored night in the sandy desert, dotted by strikingly eerie neons when the spooky stuff starts. The panel direction isn’t anything particularly outstanding, mostly made up of 3 to 4 large panels per page in a manner that quickly progresses the story. This is a sensible choice though, as the story is so focused on the interactions of multiple characters and these large panels fit multiple people and their body language efficiently. The letters from Jim Campbell are widely fluid and dynamic, often changing size and clarity seamlessly to denote the tone or volume of a character’s words. This comic has the perfect aesthetic and design for the story being told here. 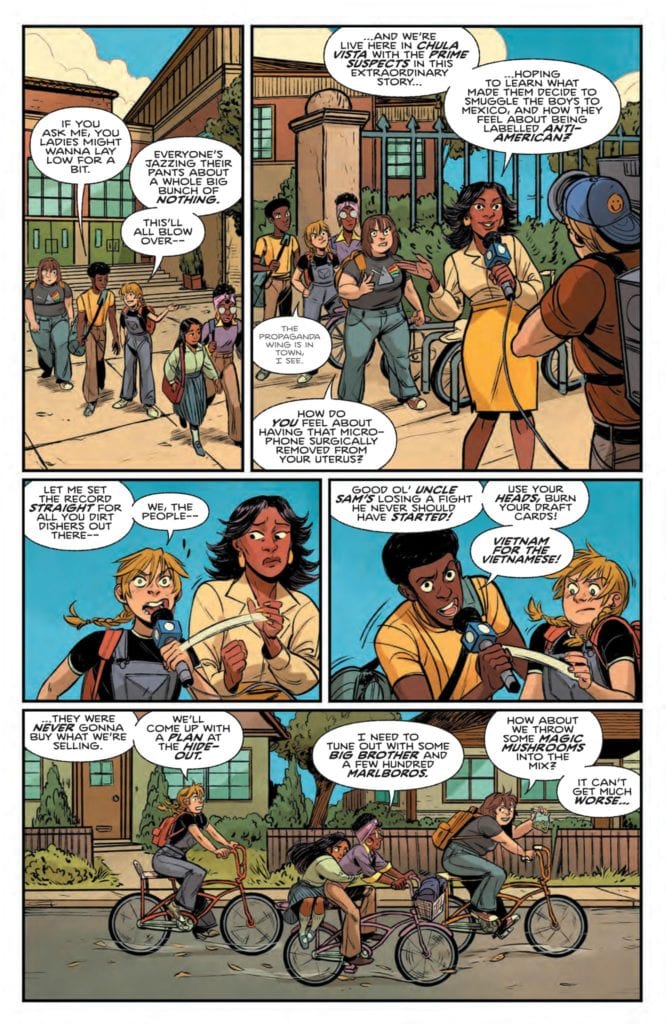 “Proctor Valley Road” #2 is a complete blast of an adolescent horror comic. Morrison and Child’s script is packed with personality, cultural insight, and cleverly laid building blocks getting to the horror elements in the story. The visuals from Franquiz and Bonvillain are a mixture of lively characterization and eerie environmental design. This issue has sold me on wherever this comic is headed, so be sure to grab a copy when it hits shelves on 4-14!

A wickedly smart and funny comic issue that doubles down on the socio-political issues of its era via character storytelling almost to the point where the supernatural elements fell out of place. Review: Nixon, Joplin, and Demon Hyenas in PROCTOR VALLEY ROAD #2