From comics auteur and legend Grant Morrison and Alex Child, along with artists Naomi Franquiz and Tamra Bonvillain, comes a time capsule of a horror story in Proctor Valley Road #1. This story uses familiar tropes and devices to weave a unique and entertaining opening chapter, full of cultural conflict and fun, scary sequences. With a clever script and stellar story-fitting visuals, this is a promising start to what could go on to be a wonderfully entertaining and witty horror romp through 1970 California.

“August, Rylee, Cora & Jennie have organized a “Spook Tour” with their classmates on the most haunted, demon-infested stretch of road in America to fund attending the concert of their dreams. When their visit turns deadly, these four friends race to rescue the missing students… before the town tears them limb from limb.” 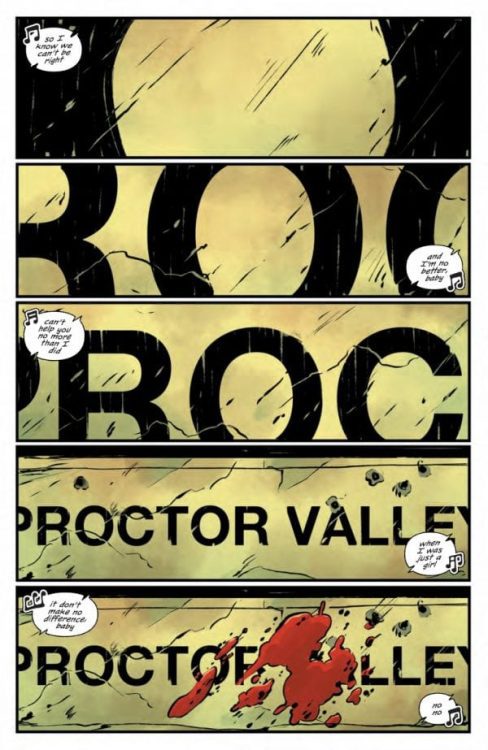 In all the years that Morrison has been gracing the comics medium with his vision, it’s rare that we’ve ever gotten a pure horror experience out of him. Sure some of his work on Animal Man, The Invisibles, and Swamp Thing reached into the realms of horror, typically of the existential or cosmic variety. His Image series The Nameless is probably the most outright horror experience we’ve gotten from the Scottish legend, but even then, it’s more conceptual. Proctor Valley Road #1 is a first for the comics icon, as this is a classic all-American traditional scary campfire tale brand of horror story. With the help of writer Child, the pair construct a setting and group of characters that feel real in a time and space that we all know about in both history and pop culture. The turbulence of Vietnam-era late 60’s/early 70’s America is the backdrop for this comic, and the experiences of the characters ground this story in something tangible. I’ve said before in my other horror comic reviews that the best examples of the genre know how to plant their stories firmly in a realistic situation with believable characters, therefore upping the stakes of the terror the cast experiences. The other big element that grounds both the characters and the audience in the story is the fact that the main cast are all teenagers and young adults, and they are written as such. They all have different personalities, none of which feels like a cliché, and they have difficulty grappling with the reality of their world – as teenagers often do. There’s an air of arrogance and self-imposed invulnerability to a few of the leads. It’s what makes this comic very reminiscent of stories like The Monster Squad or The Goonies, which obviously inspired this book. The other societal elements made by this time period, such as notions of patriotism, racism, and draft-dodging, make their presences known but don’t weigh heavily on the minds of the cast. The horror and slice of life bits trade focus with enough frequency that the comic is able to build its world and characters to a point where everything feels real, while the looming supernatural threat leers in the background. This is a superbly well-written comic, and I can’t wait to see where the story goes next. 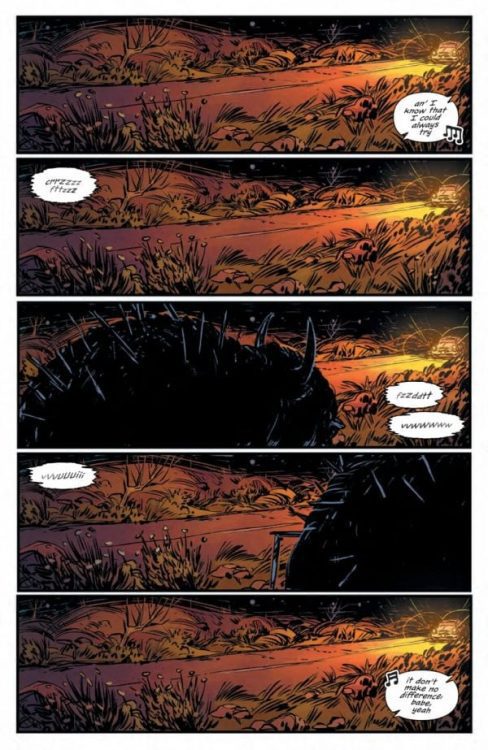 Proctor Valley Road #1 is graced by the talents of Franquiz on pencils, which I have previously praised for her work on Tales From Harrow County. In this comic, much like that other outstanding horror series, Franquiz’s soft lines, thoughtful details, and varied designs bring this world to life in fitting fashion for the story being told here. Franquiz designs this middle-of-nowhere Californian desert town in the late ’60s with an eye that makes the setting feel tangible and reminds the reader that this was indeed a real-time and place. Her character designs are highly varied in terms of facial animations and even body types, the latter of which is not often seen in comics even now. If this comic were to have all of its dialogue stripped away, we would still have a good idea of each character’s personality just based on how they are animated. The small bits of horror and monster design we get here are also inventive and spooky and teased to the point that makes me want more and more in the next issue. The colors from Tamra Bonvillain are very deep and moody, and they sell this visual aesthetic that is reminiscent of classic 60’s and 70’s horror films. Every panel has a sort of sunset and dust-cast overtone to all of its many shades, and it genuinely looks like that period of film cinematography. The letters from Jim Campbell are a neat, contemporary font that is fitting and easy to read, with really solid effect lettering as well. This is a comic with a visual style perfectly in tune with the story that is being presented. 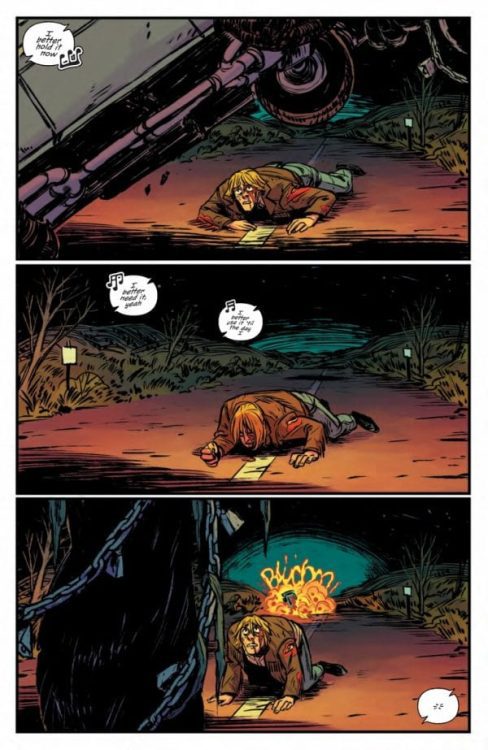 Proctor Valley Road #1 is a grounded first chapter in this horror comic that feels awfully familiar but still presents enough intrigue and depth to itself to be interesting and fun. Morrison and Child’s script is insightful and intelligent, taking advantage of the place and time the story is set in while very slowly tackling the supernatural terror lurking in the background. Franquiz and Bonvillain’s visuals are pitch-perfect, offering stellar character art and rich, dark tones that are perfect for this desert-set horror story. Be sure to grab this opening issue when it hits stands on March 10!

Equal parts The Goonies, Stranger Things, and Forest Gump, this is an impressive and fun start to this teenage horror comic that functions as a time capsule, combining the American culture of the 1970's with an entertaining horror story.Review: PROCTOR VALLEY ROAD #1 - Demons In The Desert