In Justice League #25, the Sixth Dimension storyline culminates with an explosive brawl for the fate of the Multiverse. Will the Man of Steel be able to find his super friends, or be forever lost in a pocket dimension of infinite darkness? Will the Justice League defeat their older, more powerful super-dopplegangers? Has Batman truly turned heel in order to preserve this idyllic future? Read on to find out.

Previously, on Justice League, the team hurtled through Sixth Dimension space, with Apokalyptian guards Lois Lane and Jimmy Olsen on their tail. Thanks to this dimension’s versions of Darkseid and The Legion of Doom, the heroes managed to escape. However, the World Forger, Justice League of Tomorrow, and a super-powered, super-suited Batman now stand in their way. 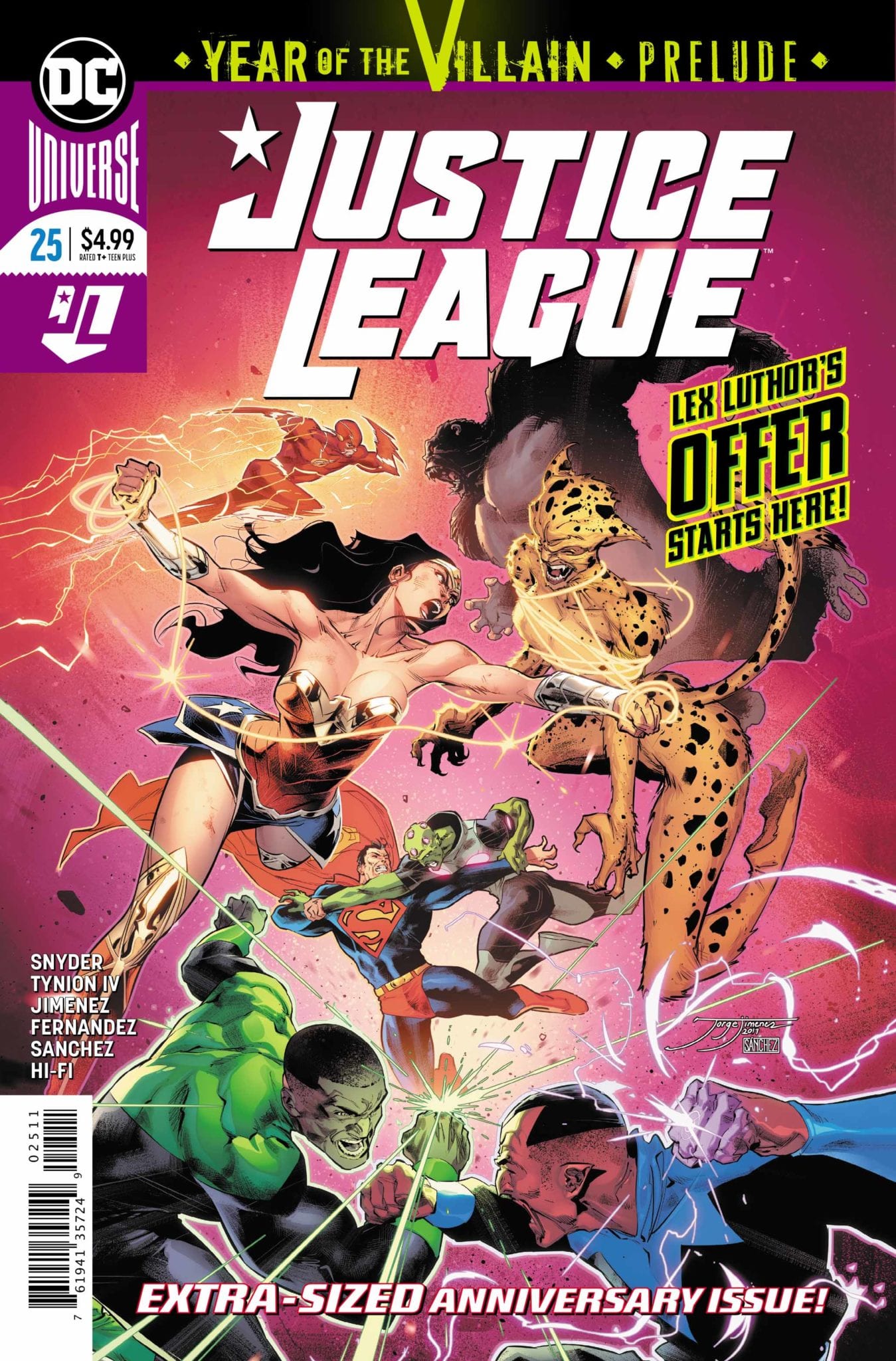 The “Sixth Dimension” storyline wraps up in this oversize issue as Superman faces down the World Forger to save the Justice League! Can Superman withstand the might of a being that can create worlds from nothing?! Plus, with the Justice League away, Mr. Mxyzptlk’s been wreaking havoc! Can anyone on Earth stand up to the fifth-dimensional menace?

As far as comic book conclusions go, Justice League #25 has proficient pacing. It gives the right amount of time for each beat in the over-sized issue. What stands out in the writing is the narration Snyder scribes as Superman makes his last stitch effort to escape his galactic prison. It starts out as something grim and full of despair. From there, it builds into words of inspiration and full of hope.

Snyder concludes the issue with a positively sinister message from Lex Luthor. He encourages the world to unleash their inner villains in order to save the world. It’s a chilling and exhilarating set up for the upcoming Year of the Villain event. This issue proves once more that Scott Snyder is one of the most talented storytellers working in the comic book industry today. 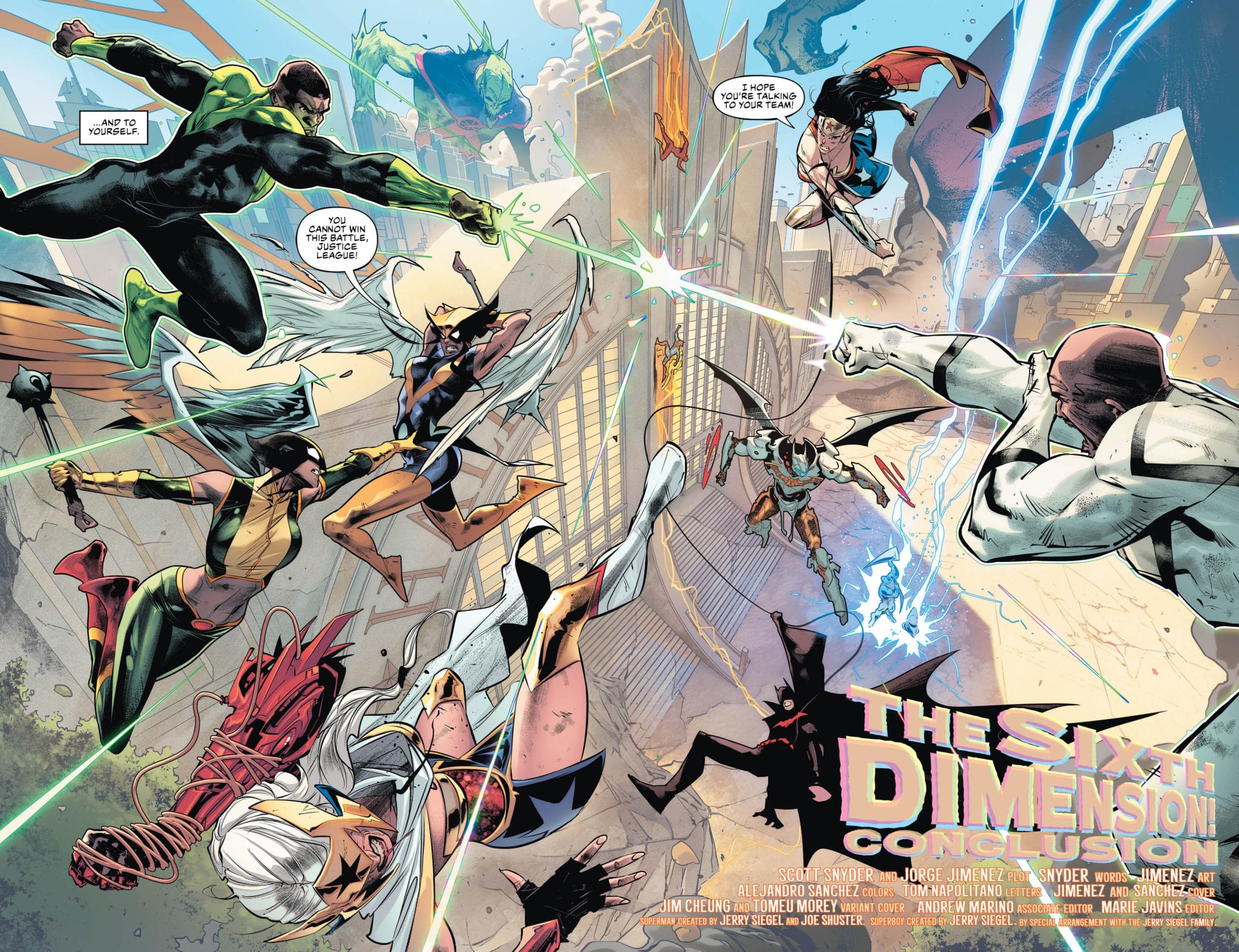 The artwork is masterful, as we’ve come to expect from Jorge Jimenez and Alejandro Sanchez.

Yes, the intense action sequences of Leaguer versus Leaguer are expertly illustrated and colored. However, what truly stands out in Justice League #25 is Superman’s visual journey. Starting out as a deflated and emaciated version of himself, Superman makes a stunning transformation before the readers’ eyes when he reaches the suns.

A splash page featuring the Man of Steel, his father, and his son is as heartwarming and powerful and intense as the suns he flies through. It builds and culminates in the single punch heard around the Multiverse. It is visual storytelling at its apex.

Snyder and Jimenez craft an exciting, adrenaline-fueled conclusion to one of the best Justice League arcs – both in terms of storytelling and artwork – in years. The book is made that much more enticing by the set up for the Year of the Villain event.

What did you think of Justice League #25 and the conclusion of The Sixth Dimension? Let us know in the comments!

As far as comic book conclusions go, which tend to feel rushed, Justice League #25 has proficient pacing, giving the right amount of time for each beat in the over-sized issue.Review: JUSTICE LEAGUE #25 and One Punch Superman