IRON FIST: HEART OF THE DRAGON #3: The World Can Handle It

Iron Fist: Heart of the Dragon #3 from Marvel Comics has some clever commentary about its universe in how world shattering events are pretty much the norm. Larry Hama writes the central conflict in a way that reflects this status quo. The dark and gritty art by Dave Wachter says a lot about the series’ conflict with how the zombie ninjas try and fail to overwhelm the brightly colored settings and guest characters by Neeraj Menon. This general takeaway outshines the main plot, which is enjoyable in its own right. the lettering by VC’s Travis Lanham goes the extra mile to make sure everyone’s efforts stand out in the growing narrative.

Hama makes Iron Fist: Heart of the Dragon #3 a memorable depiction of how mundane Marvel’s universal threats often seem. In just the first pages, the zombie ninjas that threaten our series’ heroes don’t cause the public to panic. Instead, the Filipino military handle these monstrosities off-screen without any real trouble. Even the way Wakanda deals with these invaders pales in comparison; everybody already knows they can handle the universe’s absurdities. 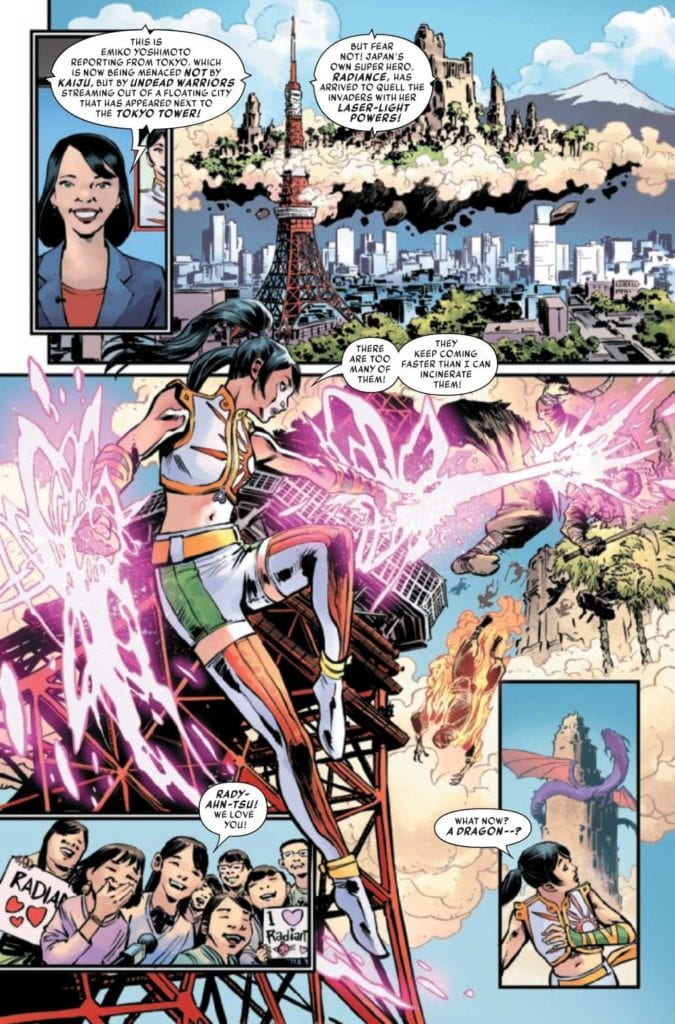 The citizens of Tokyo, Japan doesn’t even flinch at the sight of zombie ninjas and dragons. Instead, they cheer at the sight of a superhero fighting these monsters. It’s all set in juxtaposition to the overall plot. While Iron Fist and his entourage are taking things rather seriously, like the menacing eighth dragon, maybe Luke Cage had a point last issue. Without any personal stakes, the superheroes really don’t have a reason to take this mystic martial arts epic seriously.

Wachter keeps the main heroes’ situation in a gloomy art style for readers, which helps the readers recall the serious nature of this conflict. Otherwise, the vivid colors of the mundane world by Menon obscures it all like a shadow. Iron Fist Heart of the Dragon #3 has the perfect depiction of this effect through Cage’s appearance. With how much of Cage’s yellow T-shirt is shaded black by Wachter, it’s as if the hero is absorbed into the series’ plot. For comparison, Cage’s panel mate, Sunspot retains his colorful costume because his involvement is marginal.

Lanham’s lettering has a simple, clean aesthetic where the words and captions describe everything. Okoye is the only person speaking in captions, which shows how the plot is moving out of her control. The most impressive display of this dynamic comes when Lanham uses loud sounds to complement Cage’s actions. Amid Sunspot’s complaining, Cage’s pure might rocks the immediate area in order to convince Sunspot of his capabilities against ninja zombies.

Check In On Iron Fist: Heart of the Dragon #3

While there is still something sinister going on in this series, Iron Fist: Heart of the Dragon #3 offers levity. Whatever changes are coming to Iron Fist lore, they should be welcome additions to the Marvel Universe. Once the zombie ninjas and evil dragon are dealt with, everything should be fine going forward.

Iron Fist Heart of the Dragon #3 goes all in on the absurdities of the Marvel Universe. With all of the doom and gloom, the world turns as much as it always has.IRON FIST: HEART OF THE DRAGON #3: The World Can Handle It