STRANGER THINGS: SCIENCE CAMP #3, available November 25th from Dark Horse, brings fans back to the solo story of Dustin, and how he was totally the cool kid at Science Camp — all while something sinister is happening in the background, of course. 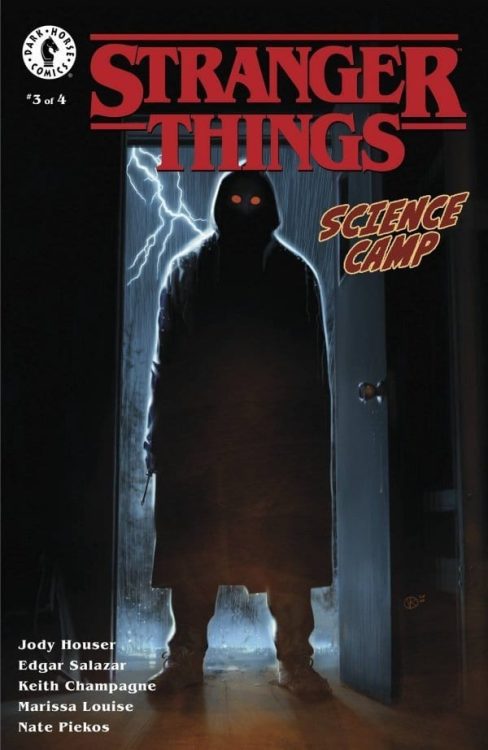 If there’s one thing that Stranger Things: Science Camp has managed to prove, it is that Dustin is actually quite a personable and likable character. In fact, if you put him in a room (or camp) full of like-minded kids, odds are good that he’ll be liked by most of them.

Ironically, this also explains how he came back from camp with a girlfriend — even if most of his friends thought she was imaginary at first. The tale is also going a long way in showing off the skills (and determination) that Dustin learned from his time in Stranger Things.

Stranger Things: Science Camp #3 is the second-to-last issue of the series, and that means the adventure is about to get a whole lot more dramatic. The strange figure lurking in the shadows is going to become a problem again, and one can only hope that the case of the missing counselors will come up as well.

Stranger Things: Science Camp #3 is the perfect balance of charming and spooky. In short, it feels just like a Stranger Things story should. Written by Jody Houser, the series first started off feeling almost casual and fun. But it has quickly taken on a darker edge.

It almost makes readers wonder why Dustin didn’t bring up this story to his friends when he got back home. Especially given the role he’s presumably going to play in the resolution (Dustin has learned better than to sit back and watch as horrors unfold). Perhaps he didn’t want to brag, or didn’t believe his friends would think the tale true? After all, they thought his girlfriend was fake for a few minutes there.

Either way, the events that are unfolding in this tale are quickly becoming more interesting with time. Anybody feel confident enough to begin making guesses on who the mysterious stranger is? With only one issue left, we’re almost at the big reveal.

Dustin’s character is every bit as endearing as always, while some of the secondary characters (girlfriend included) are getting a bit more fleshed out. Finally! Fans get to learn just a little bit more about her. It does raise the question, will we be seeing her again in future seasons of the show?

Stranger Things: Science Camp #3 could be an advertisement for an 80s camp — it is that spot on. Every little detail looks like it came straight from the decade the series is set in, and that in itself is an impressive feat. Throw in the camp elements, and you’ve got something else entirely.

Edgar Salazar (pencils) and Keith Champagne (inks) worked hard together to bring that vision to life, that much is clear. The cabins, clothes, and every other little detail really do read as a blend of the time and location, while the characters look exactly as they did in the show (with a few stylistic changes, of course).

Marissa Louise’s colors bring it all together, colors that could happily read as being from the 80s, or from a camp that is having trouble keeping up with the times. Except for the scenes portraying the horror elements, of course — those are appropriately swathed in dark colors.

The lettering for this issue was provided by Nate Piekos, and it is yet another example of work well done. The screams and sound effects feel real, while the story carefully unfolds around Dustin and the camp.

Stranger Things: Science Camp #3 continued Dustin’s solo story. Showing how much he has grown and learned, thanks to his friends (and the circumstances he’s already gone through). It hints strongly towards the young man Dustin will one day become. While also having a bit of fun and drama along the way.

Stranger Things: Science Camp #3 is another fun and increasingly dark adventure for the crew fans love so much, as Dustin flies solo and faces a new threat. The artwork is perfect for this tale, and thematically fits the style of the original series. How Dustin Leads In STRANGER THINGS: SCIENCE CAMP #3