Marvel Comic’s GHOST-SPIDER ANNUAL #1 out this week, packs panel hopping action and a heart-filled message of loving yourself all in one package.

With the story taking place on Earth-616 (Marvel’s main earth), Ghost-Spider Annual #1 follows Ghost-Spider as she encounters classic X-Men villain Arcade, as he sets a trap to catch Spider-Man. Instead of catching the main web-slinging hero, he instead entangles Ghost-Spider in his game of life or death, thus prompting her to engage in a gauntlet of Spider-Man’s villains to save a ‘damsel in distress.’ With this standalone plot there is no need to read Ghost-Spider #1, but here is our review to catch you up.

With Ghost-Spider narrating the important aspects on why she is on earth, writer Vita Ayala wastes no time throwing the titular character in Arcade’s gauntlet. With the promise, if she can make it through the villains while saving the citizen, she can go free. The best part of Arcade’s plan isn’t intended for Ghost-Spider. It was set up for Spider-Man years prior, and she happens to fall into the trap. The bonus, is Arcade constantly calling her Spider-Man since it is pre-recorded.

Ayala bookends the story incredibly well, starting with Gwen declining an invitation to hang out, then ending with her meeting with those that invited her. With her inner-monologue, Ayala shows Ghost-Spider at her most vulnerable, continually doubting herself, but having the intentions to help others no matter the danger. By the end of her adventure, she realizes that “People deserve to feel happy and be safe.” Then realizes that she can’t keep isolating herself, as a hero she can’t do it all alone

As Ghost-Spider Annual #1 is heavy in action scenes, the art needed to match this tone and pace, which artist Pere Pérez does magnificently. Each fight is styled or drawn different to make them stand out, with the Lizard fight (shown above) being the most uniquely paneled, with great use of colors. The amazing panels aren’t limited to the fights. Pérez draws mundane action with an impact that feels as if you’re there.

The art also stands out because of Rachelle Rosenberg’s colorwork. To make hits impact harder, Rosenberg voids the panel of back color or adds a bright solid to contrast the characters to highlight the motions. This working of colors works well with action-heavy panels, like when Ghost-Spider swings fast or uses her spider-sense.

The duo of Pérez and Rosenberg work in perfect harmony with one another, bringing forth some amazing panel work. Their fluidness for every action sequence flows perfectly while giving the trip to Murderworld a phenomenal comic book feeling.

Clayton Cowles lettering for Ghost-Spider Annual #1 falls short the same manner as Ghost-Spider #1 did (Review, again in case), where the location fonts are stylized to the point they are hard to read. With Earth-616 reading as Earth-GIG (Pictured Below). Besides the hard to read font style there are a few fights void of sound effects, while others have it. This seems more like a stylistic choice, but kills some of the impact, looking weird at times. 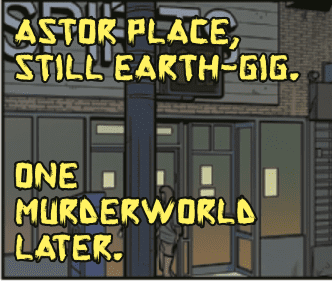 Ghost-Spider Annual #1 feels as if it should’ve been the first issue of the series. Ayala writes an amazing Ghost-Spider making her feel relatable, and a fun hero to read. This is a great book for a newcomer to enjoy.

Memorable Quote: “I learned this trick from watching Black Widow on Viewtube.” – Ghost-Spider

Dear Readers on The Web

What did you think of your visit to Murderworld? Let us know in the comment section below.