Review: GHOST-SPIDER #1 And Why Marvel Shouldn’t Have Renumbered Spider-Gwen

With great power comes a college degree? Or in GHOST-SPIDER #1’s case, a beginning issue that falls short on its web-slinging.

In recent trends Marvel (and DC) loves to renumber their ongoing series a fair amount. This renumbering usually comes with a rebranding of the series name, and a new first issue. Essentially this tactic is to draw in new readers, but if you ask long-time collectors it’s an annoyance. Marvel has done just that with today’s release of Ghost-Spider #1.

Ghost-Spider #1, out this week from Marvel Comics is a continuation of the Spider-Gwen title, but is re-titled for a multitude of reasons; one such is the acting of a jumping-on point. Another would be the fact that it’s a huge location and story shift with Gwen now going to college on Universe 616. With any first issue comic that’s a continuation of a previous story, it’s good to give a little background. Well, that’s where Ghost-Spider #1 web unravels.

Taking place after Spider-Geddon and the ten-issue Spider-Gwen: Ghost-Spider, Ghost-Spider #1 follows Earth-65 Gwen Stacy as she decides her next big step; as everyone in her dimension knows Gwen as her superhero identity Ghost-Spider (formerly known as Spider-Gwen). Now with no private life and the ability to travel between dimensions Gwen makes the decision to finally go to college–on Earth 616.

With this new life chapter opening up Ghost-Spider #1 should be an easy jumping on point for new readers, but it relies heavily on knowing what has previously transpired. Instead of giving readers a quick exposition moment or a flashback it relies on the readers’ keen use of Wikipedia or buying the past series. The title page has a quick recap but barely enough for newcomers.

Instead of recapping past events (where’s the new suit from? Her name change?) there are a few instances when Ghost-Spider #1 drops some prior info needed, but it’s barely enough to understand all of what’s going on. One being between Gwen and Peter Parker (Earth-616) where Peter explains what is happening with Gwen’s costume now that it’s a type of symbiote. Confusion on why Ghost-Spider #1 is a renamed first issue and not titled the same as the previous issue aside; the plot is only bearable due to its characters moments sticking out most.

Seanan McGuire’s dialogue between Gwen and her supporting cast plays off quite naturally, showing a history behind the characters. During her introduction to the Earth-616 college by its Dean, they mention Gwen being from another dimension like it’s old hat. This nonchalant attitude from the Dean and those around her became the highlight of a rather bland issue that feels like Ghost-Spider #1 doesn’t deserve the re-branding, or numbering. 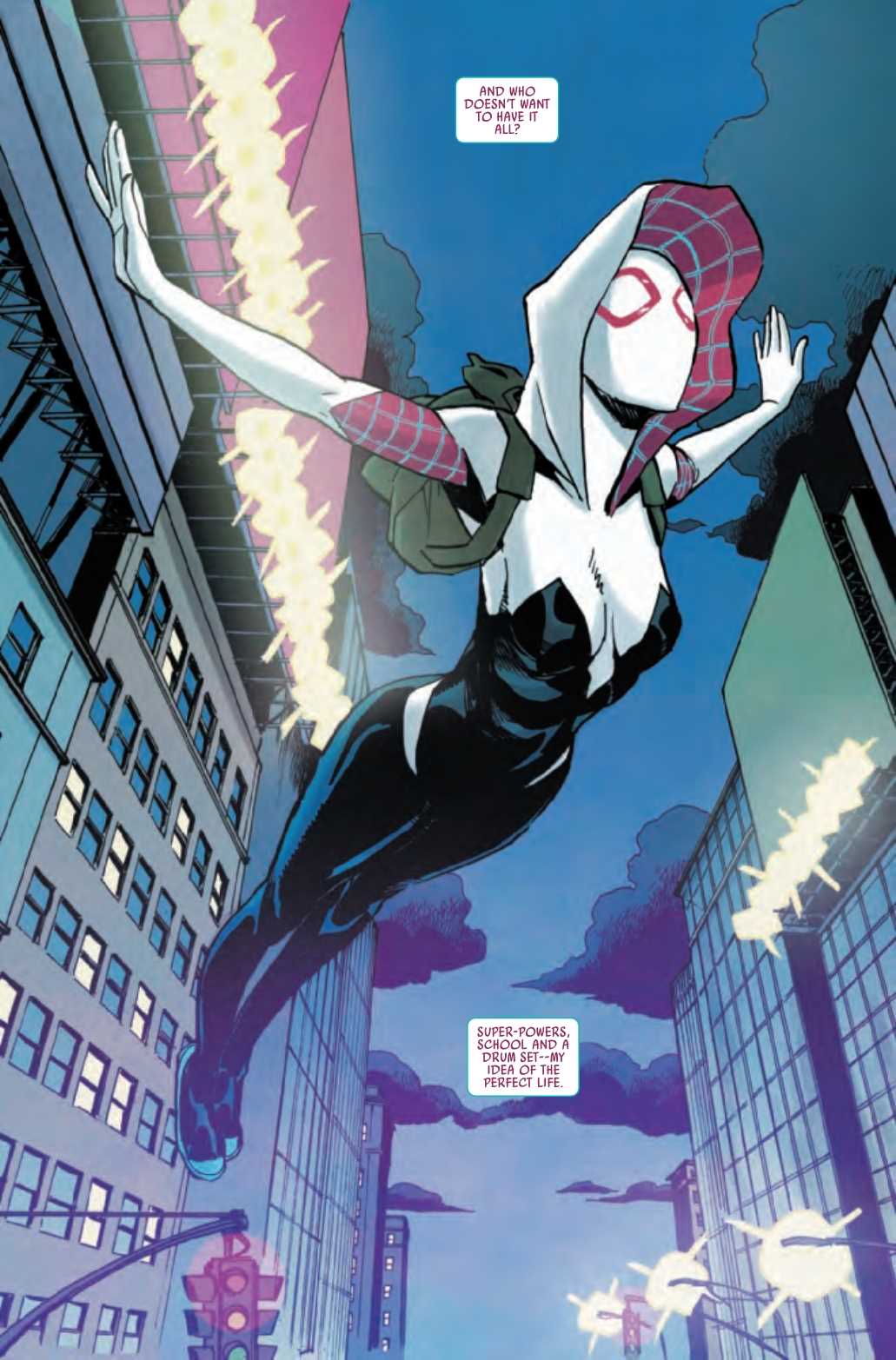 The original Spider-Gwen series was known for the art – personally, I loved it’s frantic feeling – by Robbi Rodriguez. Whereas Ghost-Spider #1 isn’t drawn by Rodriguez but by Takeshi Miyazawa, who doesn’t try to emulate Rodriguez’ style instead he spins his own web. Miyazawa’s art is parallel to Manga with his use of multiple size shots for different actions. In one conversation you can bet on there being more than five panels as not to make it linger too long and becoming stale.

Ghost-Spider #1 has only one fight scene, so it’s hard to comment completely on how great of a flow Miyazawa has when it comes to fights. In the scene which involves a huge rat, Ghost-Spider and Spider-Man fighting, Miyazawa keeps it limited to four panels showing the action. This style makes the fight seem fast, but while losing any fun flow or acrobatics that the Spider-heroes are known for.

Colors can easily make the art stand out for better or worse, in Ghost-Spider #1’s case it is meh. Ian Herring uses bright colors that seem that they want to pop out at you but is instead dulled down making it less vibrant. This dulling of bright colors makes the backgrounds dull and flat instead of lively and vibrant. In a title that should feel alive and teaming with colors Herring’s colors never hit that desired high.

Ghost-Spider #1’s lettering (courtesy of VC’s Clayton Cowles) doesn’t have much you can shake a web at for its dialogue bubbles, but its location fonts are horrendous. When a location is brought upon the page, a huge grunge looking yellow font pops up that makes numbers look like words. Instead of reading Earth-65 it read as Earth-GS.

Squash Goes The Ghost-Spider (A Conclusion)

Instead of being a completely new series where you either don’t need prior knowledge or said knowledge is given in a clever manner, Ghost-Spider #1 feels like a new arc not deserving of a re-brand. Whereas Marvel could’ve used its last series name and added the arc to the cover and this issue would’ve felt better in that respect. But even that wouldn’t help the feeling of how bland and unoriginal Ghost-Spider #1 is while not living up to Gwen’s past solo series.

Throughout Ghost-Spider #1 no part of the story feels specific to Gwen herself sans the dimension traveling. With her going to college while still crime-fighting and having the fabled ‘Parker Luck’. You could easily copy and paste any other Spider-hero and the story beats would feel the same. Much like every other Spider-hero, Gwen now even has a symbiote.

A cliffhanger ending with a classic Spider-Man villain doesn’t even feel special, instead, it makes you go, “Are we really doing this again?” But we are glutton for punishment and will read issue two hoping that it doesn’t go down a familiar route.

Memorable Quote: “Oh. That’s easy. My suit is made of spider!” – Ghost-Spider

Yeah, that’s not something you want to tell little kids!

GHOST-SPIDER #1 reads as if it's a continuation on a long running series instead of a new number one. While Gwen is on her way to college (albeit another dimension) it's reminiscent of just another basic Spider-man story especially with it's cliffhanger.Review: GHOST-SPIDER #1 And Why Marvel Shouldn't Have Renumbered Spider-Gwen