Review: Heroes Struggle on Destiny Beach in DOOM PATROL WEIGHT OF THE WORLDS #4

The Doom Patrol has been making a name for themselves amongst the stars. After being reunited by Crazy Jane, the team has been going planet to planet helping who they can. They recently had a detour as they found themselves trapped in the mind of Mento, but they are soon able to recruit him. Along with that, the team has been getting upgrades to their powers, such as Negative Man becoming positive and Robot Man getting a new body. What new adventure could the world’s strangest heroes stumble upon next? 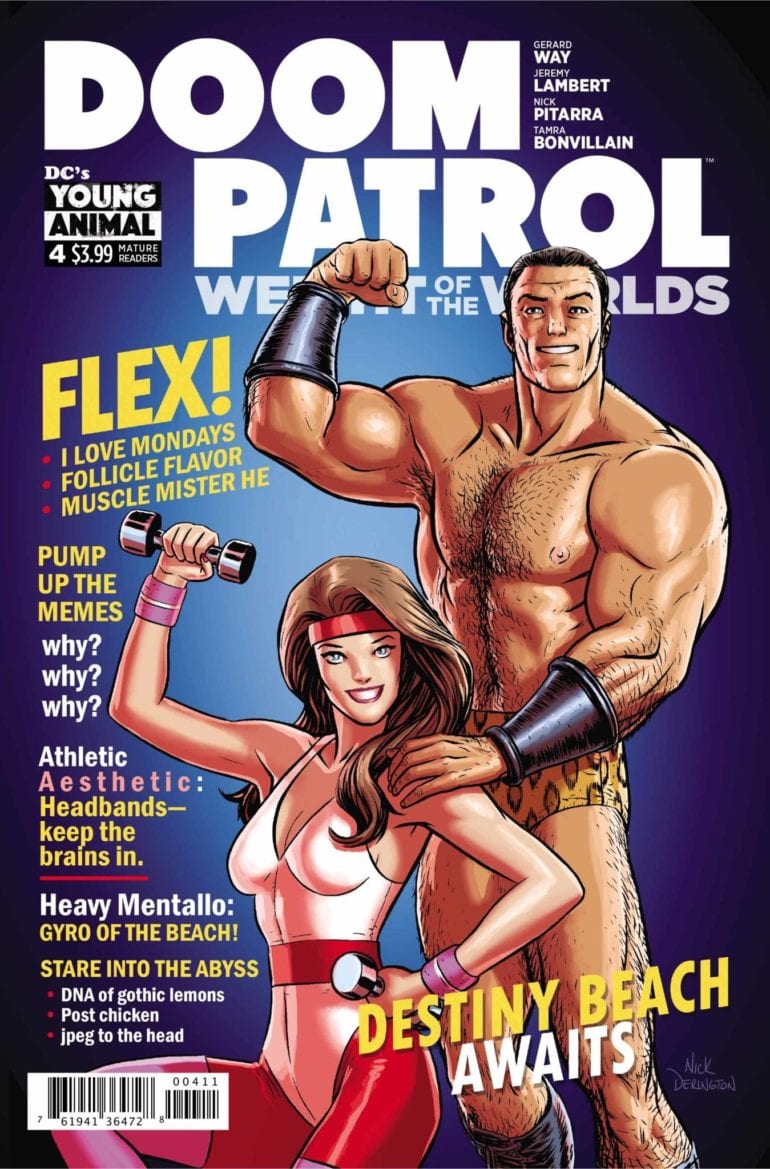 We open with an explanation of what the mythical Destiny Beach is. It is where several bodybuilders go to get the same powers as Flex Mentallo. It is the ultimate paradise to get in shape, which is why it’s shocking when the Doom Patrol arrives to find the beach trashed.

It’s revealed that another group of bodybuilders has taken over, with their leader wearing a powerful symbiotic set of trunks. To save the beach, Flex challenges the villainous muscle heads to a flex-off with members of his old workout group. Meanwhile, Cliff has been working to help the people of the universe in any way he can. Every time he does a good deed, his robotic body instantly upgrades, giving him the incentive to keep going. 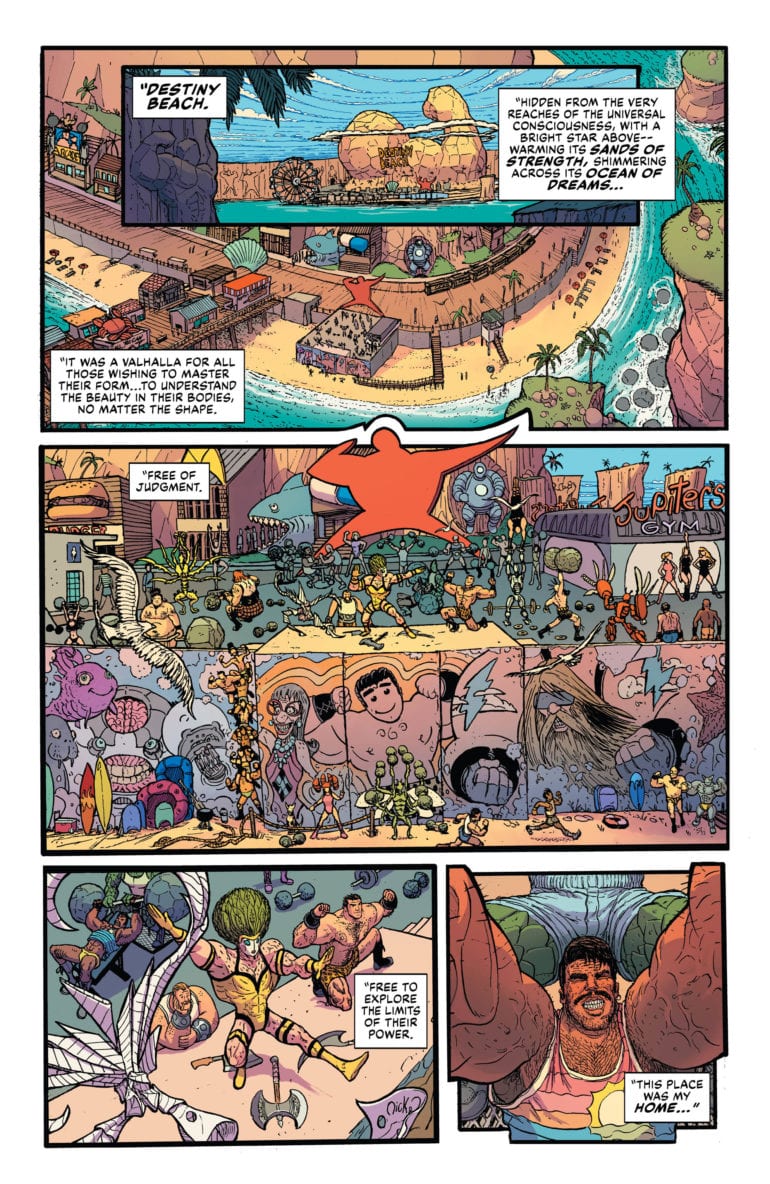 This continues to be a strange book with one-off adventures instead of there being one big overarching story. On the one hand, it caters to the people who really enjoy the bizarre nature of the book. These solo adventures also help with character growth, with everyone evolving into new versions of themselves.

The downside of this style of storytelling is the fact it makes the series feel disjointed. I complete forgot Destiny Beach was a thing as it wasn’t mentioned since issue one and we never mentioned it in issues two or three. Add that to the fact the only connection to the past issues is the side story with Cliff, it just feels out of place. In the previous series, things were random, but they still all connected. Maybe it will in the end, but for now, Doom Patrol just feels lost. 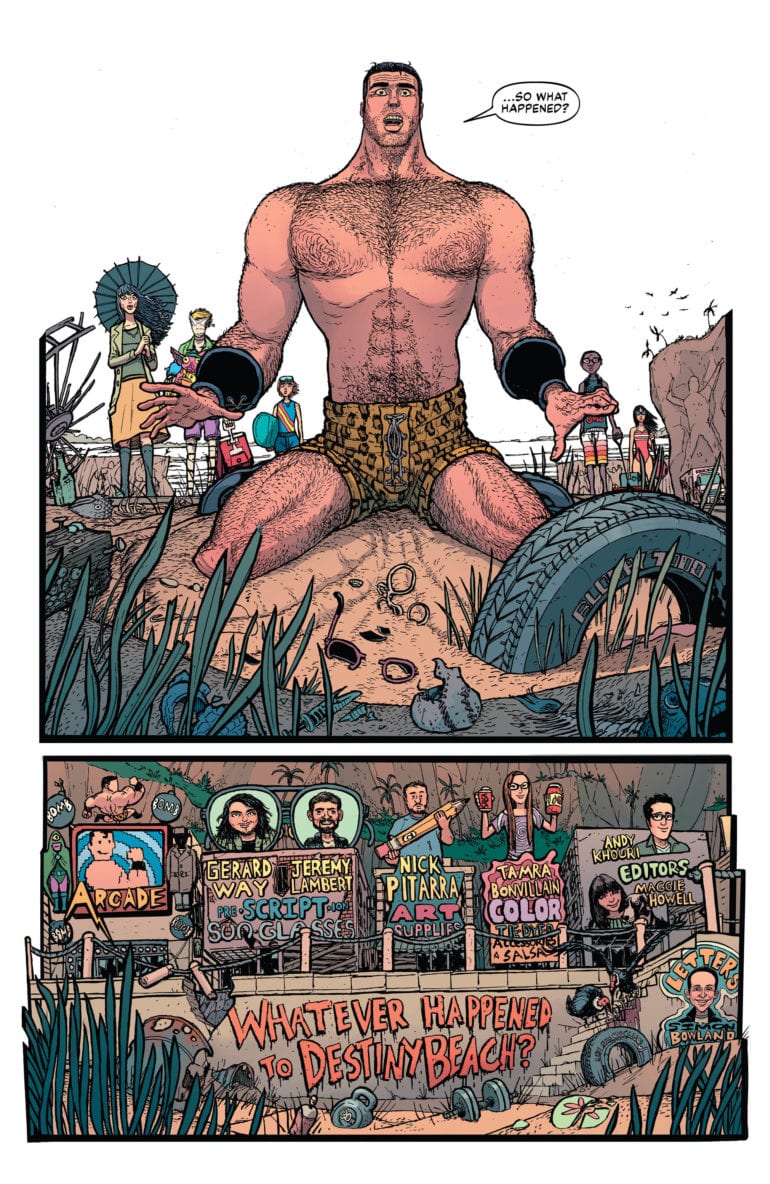 For this issue, we have Nick Pitarra doing the art, and he honestly does a great job with the issue. He was able to match the overall cartoonish style of the new iteration of the Doom Patrol as a whole, but still go above and beyond with his own designs. The people of Destiny Beach look great, albeit comical with the number of muscles they flex for the final showdown.

Another great part of the art is Tamra Bonvillain’s colorwork. While previous issues have been more vibrant to have the characters pop, she actually keeps it more grounded. This style definitely had me hooked to keep my investment in the story. There were vibrant scenes as well, but those were contained to the places that were certainly in better shape, such as Dannyland. Overall, Bonvillain works well with Pitarra and makes this issue really stand out. 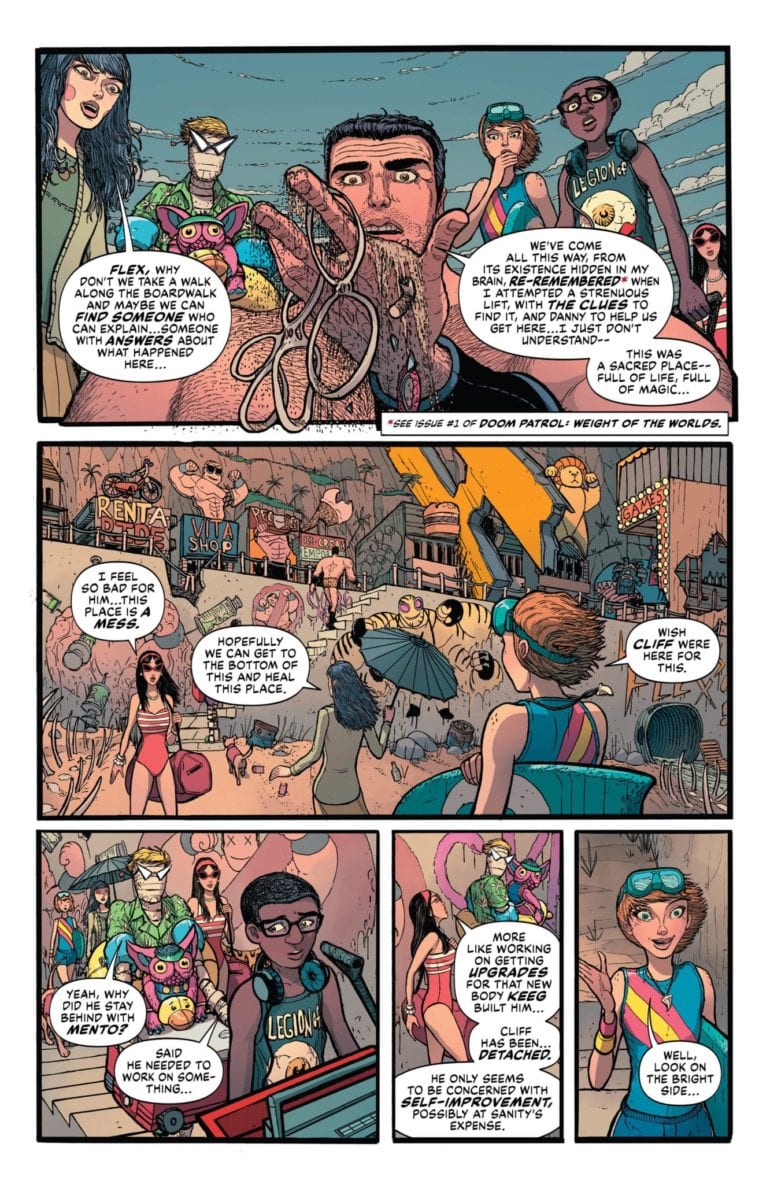 This issue of Doom Patrol is as strange as the rest of the series, but these one-off adventures are starting to show cracks. While I enjoyed the Destiny Beach adventure and the final flex off, it feels rather pointless as it isn’t connected to the other adventures. The art team has done an excellent job with this issue with beautiful designs and colorwork, especially during the final flex-off. While it was an okay issue, the series needs to find an overarching story to tell or risk losing focus from readers.

While beautiful to look at, the strange episodic style of the series is beginning to weaken the story.Review: Heroes Struggle on Destiny Beach in DOOM PATROL WEIGHT OF THE WORLDS #4