Review: DOOM PATROL: WEIGHT OF THE WORLDS #1 is a Fantastic Return

The Doom Patrol Has Returned in Their Own Bizzare, Heroic Way

Three years ago, Gerard Way came to DC Comics to create an imprint called Young Animal. The comics under this imprint contained more of the bizarre and obscure heroes the DC Universe had. From Shade, the Changing Girl to Bug the Forager, the comics ranged from dark to weird every issue.

However, none were as strange as Gerard Way’s version of the Doom Patrol. As far as the world’s most unusual heroes go, the two volumes leading up to the crossover Milk Wars(still sounds weird as I type it) were some of the strangest stories many have ever read. Yet that’s what made it stand out to this reader. It has been nearly a year since its final issue, and now Way has returned with a new adventure. Can the Doom Patrol carry the weight of the worlds? 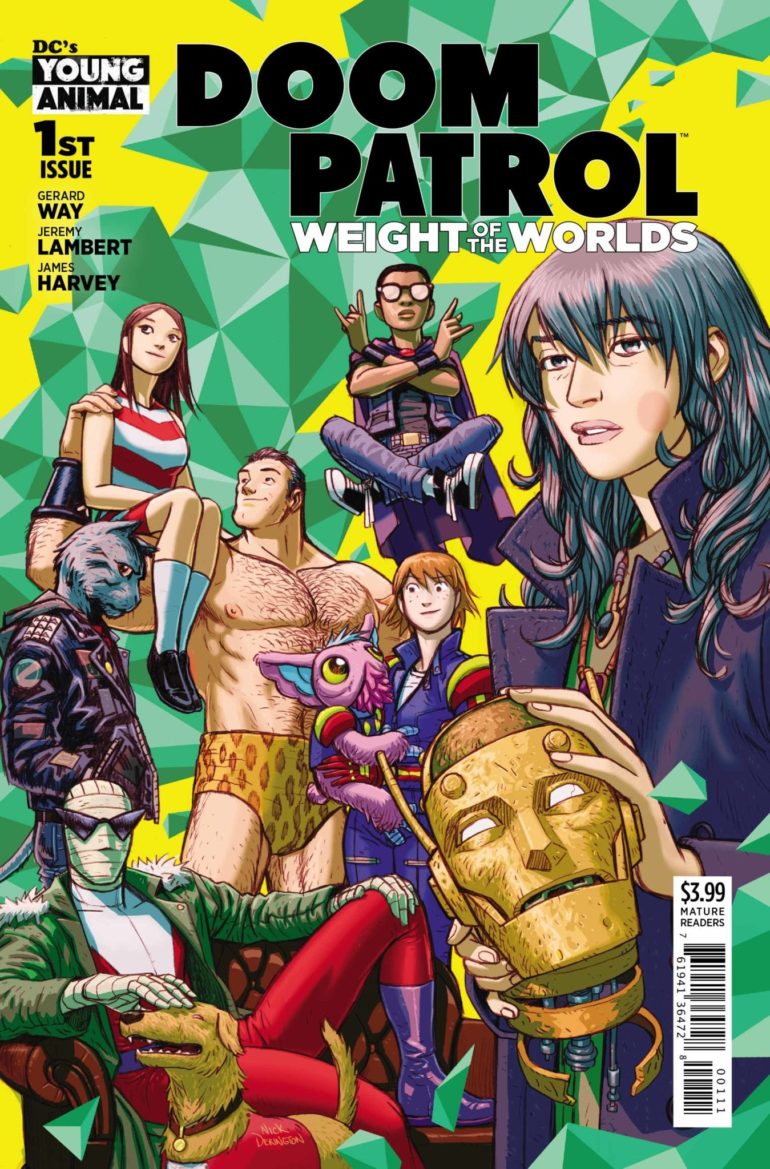 Picking up a little bit after the events of Milk Wars, the Doom Patrol is trying to find a new direction. Cliff Steele, who was once Robotman now transformed back into his human state, goes home to try and make peace with his mother. Flex Mentallo and Rita(Elastigirl) have been steadily reintroducing her to reality, only to make it their goal to find the beach Flex had seen in a vision.

Negative Man and Crazy Jane have been pursuing different forms of therapy, which leads to the adoption of a puppy and the new direction they were all searching for. Crazy Jane asks Danny, the team’s ambulance for transportation, to take the team to a place that needs their help. That place ends up being a planet full of people being forced to do non stop exercise for a cruel prophet. 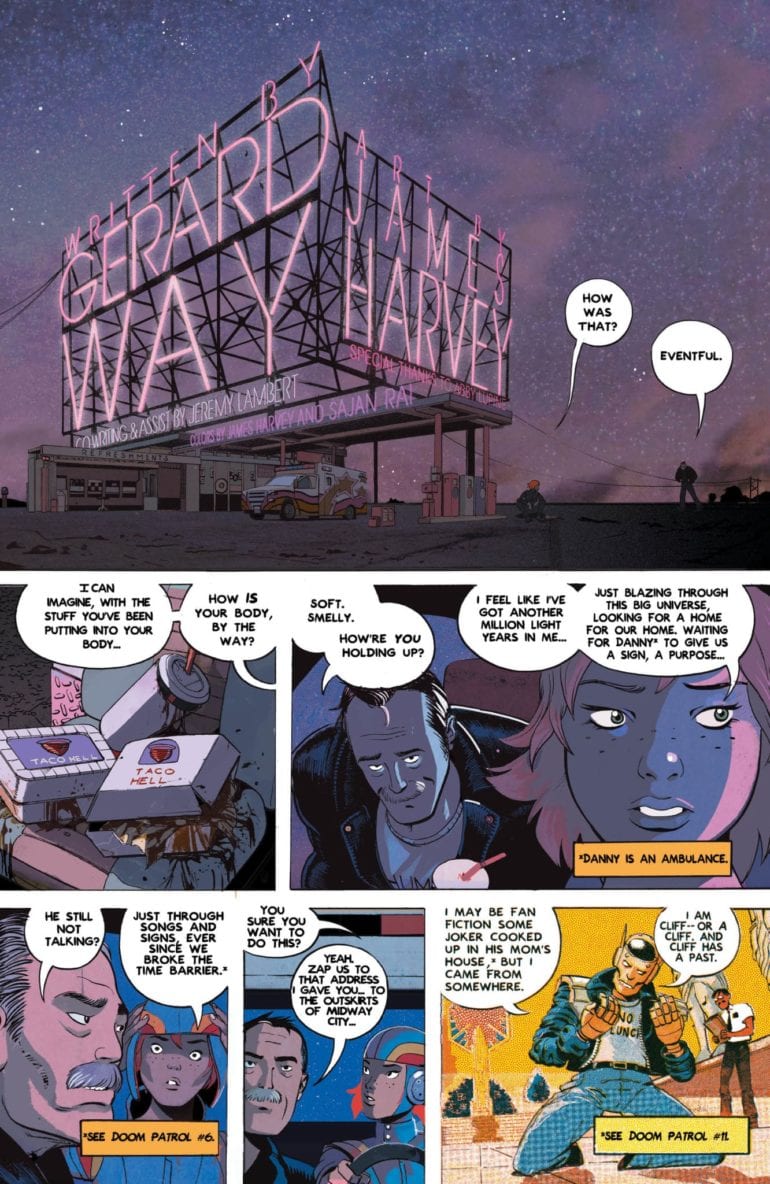 This was a bizarre but all around enjoyable ride back into the Doom Patrol. I enjoyed seeing the characters still affected by the Milk Wars crossover and how they were choosing to cope. From animal emotional support to going home to see their family, these heroes are shown to be just as human as any other character in the DC Universe. It makes the book feel more relatable, even if the situations are out of this world.

Another great aspect of the book is that most of the team is together at this point. The last two volumes had the team scattered across the world, and it was a new character, Casey Brinke, to bring them all back together. While the adventure was fun to get them all together, it felt great to see them all helping out here. If this comic turns into an episodic adventure across the stars with the team working together to save lives, I think I’ll love this Doom Patrol even more. 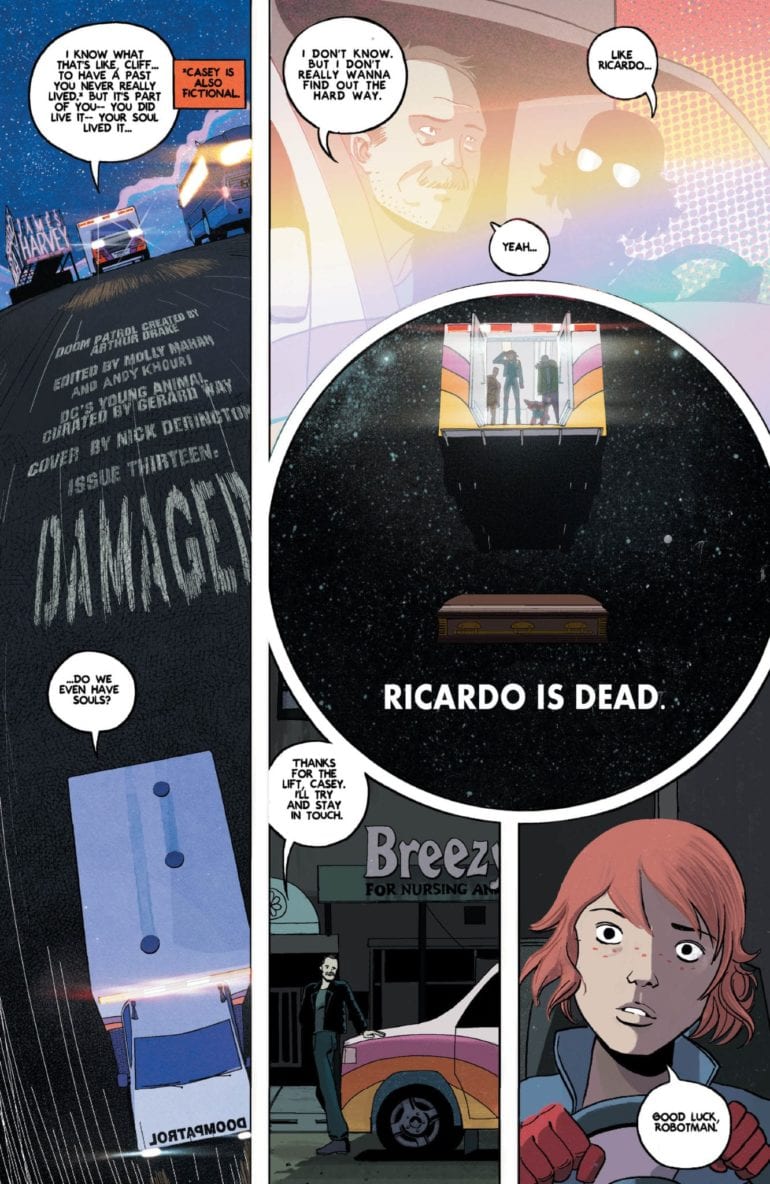 One of the few things that sadly doesn’t return is the art of Nick Derington. While his work helped bring the Doom Patrol back to popularity, James Harvey does an excellent job here. His line work makes the entire issue feel psychedelic in nature, but also leaves room for haunting moments that shakes this reader to his core. One of the most chilling pages in this book is a dream sequence with Negative Man, where we watched a terrified man die during a war. The detail in the thousand-yard stare and his death is still burnt into my memory.

The art gets even better when you take into account the fantastic colorwork from Sajan Rai. It walks this line of vibrant and subdued to make the whole thing feel like an old comic book. Mix it with the bizarre nature of Harvey’s linework, and we have a perfect look for this iteration of the Doom Patrol. 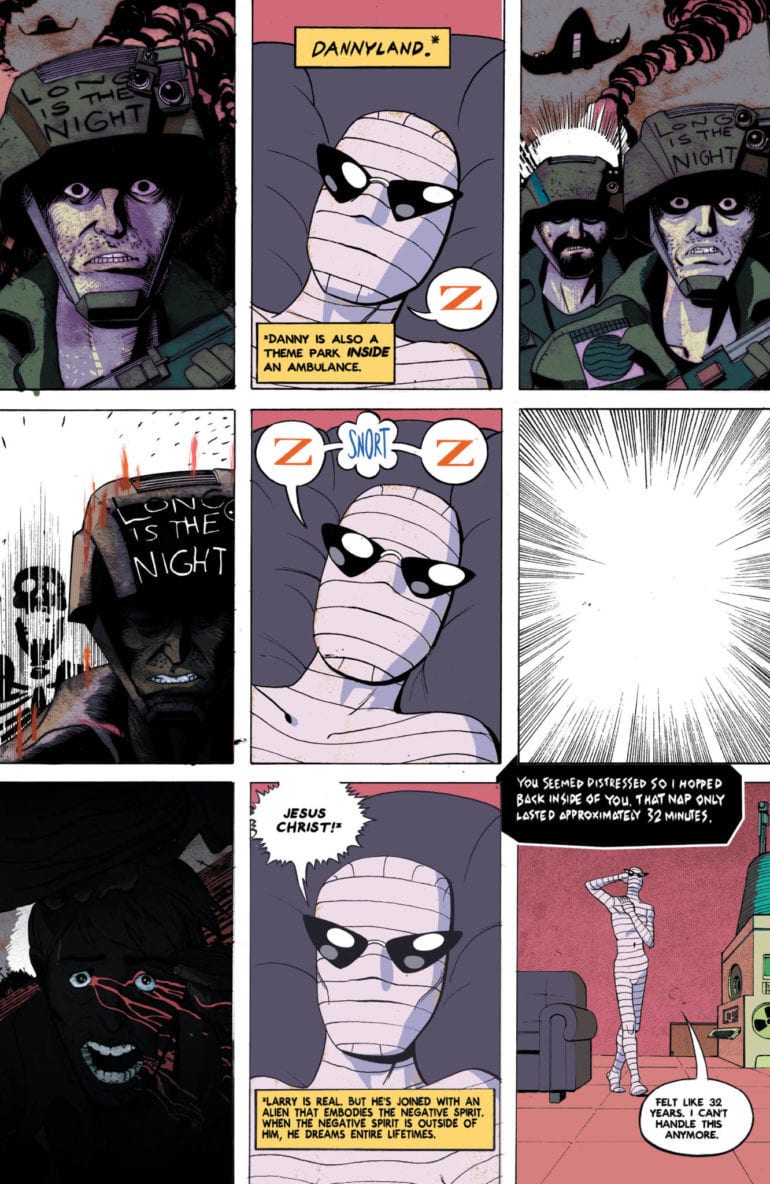 The Doom Patrol is back and is still just as strangely fantastic as it always has been. The story has its action and character-driven moments, all the while maintaining its odd charm. The art captures the oddities perfectly with a variety of dark and bright imagery. It’s just a great read, and I highly recommend it.

Doom Patrol returns to form with a bizarre, dark, sometimes humorous, and character-driven first issue.Review: DOOM PATROL: WEIGHT OF THE WORLDS #1 is a Fantastic Return