Review: Strange Planetary Divorce Case is the focus in DOOM PATROL WEIGHT OF THE WORLDS #2

The Doom Patrol’s bizarre adventure is both a blessing and a curse for readers.

The Doom Patrol has returned, and they have a new destination. After the events of the Milk Wars, the team has worked to find themselves. Negative Man adopted a puppy, Cliff Steele(Robotman) has gone back to see his mother, and Jane gets a crazy new idea. This idea involves the team piling into Casey’s ambulance and fly off into space to save planets. After quick convincing, almost the entire team heads off, except for Cliff. The former Robotman realizes he’s left too many bad memories and relationships to go on. Thinking his only good was as Robotman, he drives off a cliff. Will the team get their favorite robot back? 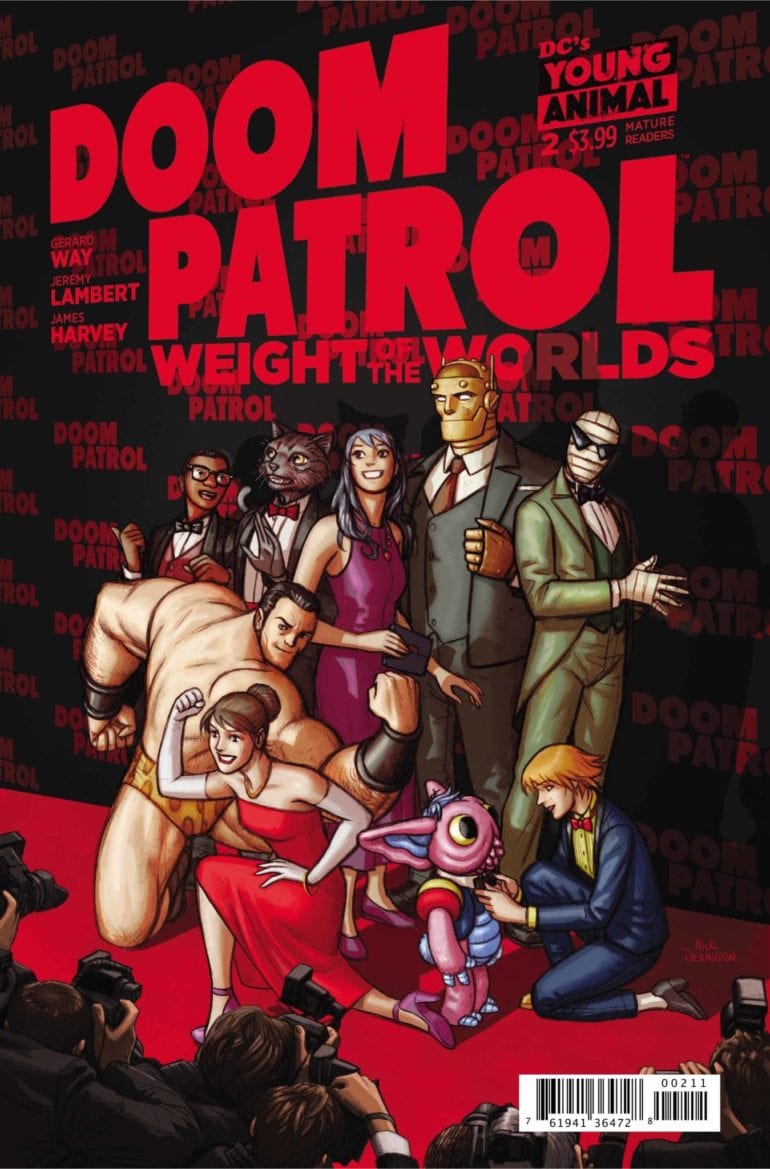 We open our story with the return of Robotman after Casey finds his car crash. Keeg, Negative Man’s spirit, reveals to Cliff that he had been working on an upgraded version of his body. The body includes upgrades that will be unlocked for every act of kindness Cliff does. We also learn that after adopting Hank, Negative Man has been full of positive energy.

While that might be fine for most people, it does cause an issue for Keeg as he can no longer enter Trainor. That same positive energy eventually breaks free and gets lost inside Dannyland. Before they can find the positives, the Doom Patrol heads off to meet a pair of sentient planet headed people to assist in their space divorce. 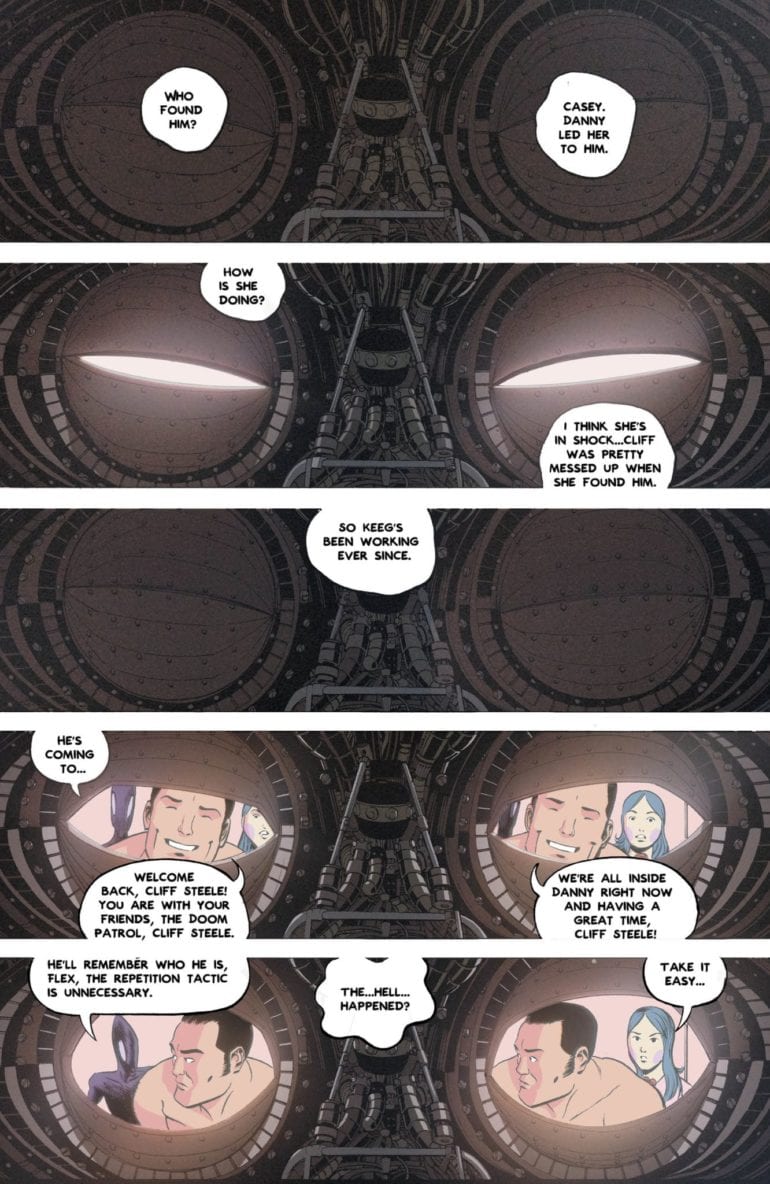 If I didn’t stress the bizarre nature of this book before, it practically speaks for itself now. It’s a tough story to follow if you are not used to the Doom Patrol, but it is one that is intriguing. We have moments of fleshing out the characters that we don’t often get with comics. Cliff accepting his role as Robotman, Trainor explaining how his life had turned around thanks to Hank, and even the Planetary divorce is full of these more profound character moments.

That leads me to my biggest problem with the issue: three stories in one normal-sized issue. We had to jam Cliff’s rebirth, Trainor’s positivity change, and a space divorce case into your standard 20+ pages. This wouldn’t be as much of a problem if it weren’t for the fact one was glossed over, and a deus ex machina saved the other. The remaining storyline does show a lot of promise, but it is a tad irritating to watch to other potential stories get tossed aside. 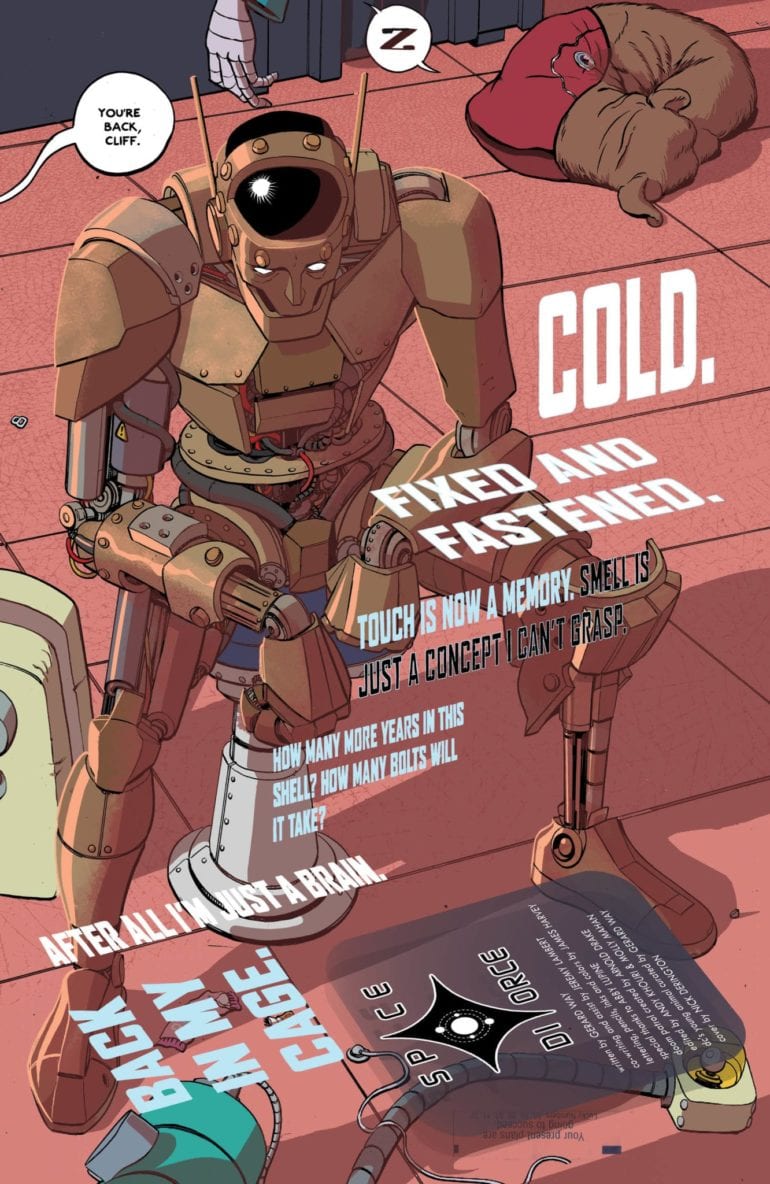 James Harvey continues to impress with his illustrations for the Doom Patrol. While it doesn’t have the cartoonish nature of Nick Derrington’s style, this style is better used for the more dramatic character moments. The reveal of Cliff’s return as Robotman is heartbreaking, and you can tell it hurts for him thanks to the detail Harvey put in. Derrington had those moments too, but his style was more suited to the bizarre nature rather than dramatic moments.

Harvey’s best work comes in the form of his two-page spreads. The first is a map of the entirety of Dannyland, which gives nods to the previous series and details the whole of the park. It’s only to show how massive Danny is, but it’s nice to see the level of detail put in. The second two-page is the deus ex machina mentioned in the Story section. While I won’t go into great detail about what saves the day, it’s illustrated beautifully while still capturing the bizarre nature of the book. 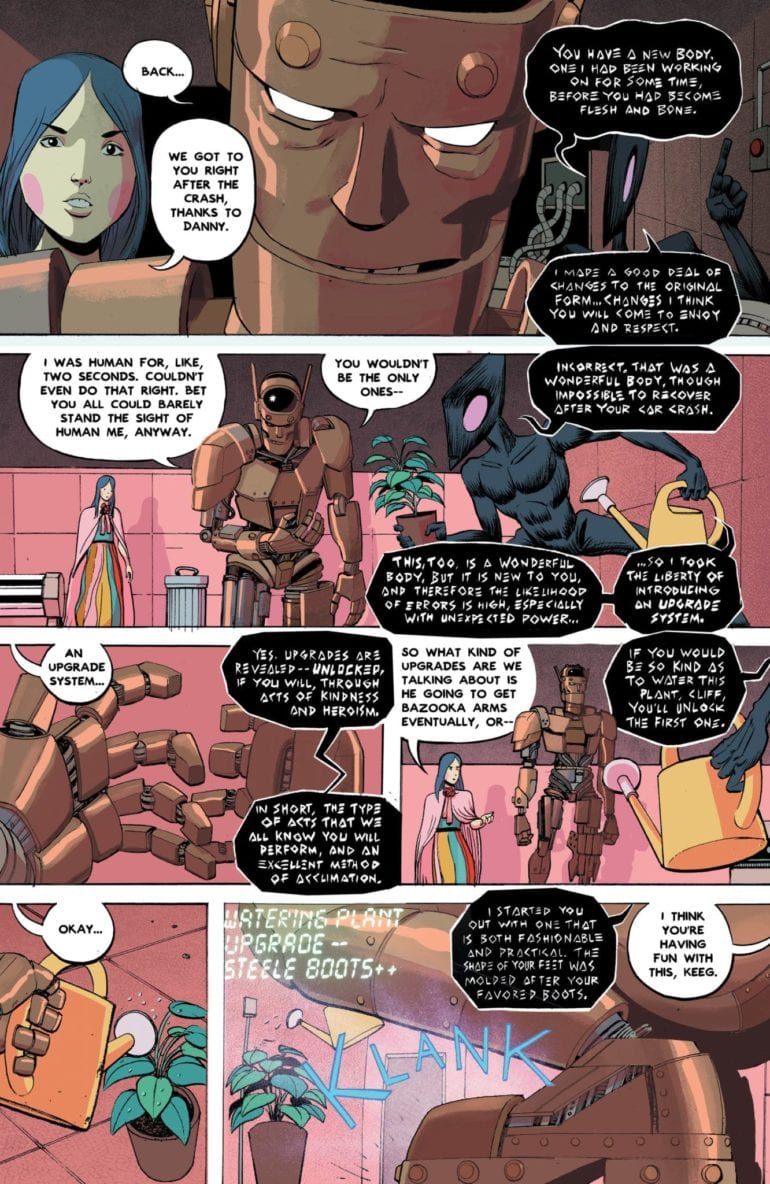 This issue is a good follow up to the first issue, but I hesitate to call it a great one. While the dramatic, humanizing moments for Cliff and Trainor are well done, there isn’t much of an overarching plot to get invested in.

While it’s still early in the series, it appears that it will be following the Doom Patrol on random adventures. That can work under the right circumstances, but the question is how long it can keep it up. The art is quite good, but I don’t think it will be enough to carry the series as a whole. I enjoyed myself, but we need to get an actual arc forming soon, or this return is going to fizzle out.

The bizarre nature of the Doom Patrol is beginning to affect the storytelling, yet still pulls out more profound character moments.Review: Strange Planetary Divorce Case is the focus in DOOM PATROL WEIGHT OF THE WORLDS #2