With the concluding issue, DEAD END KIDS #3 wraps up its emotional coming-of-age story on a somber, yet high note. Word of warning, you may need some tissues on hand.

Issue three of the murder mystery from Source Point Press releases September 25th, culminating with the reveal of who killed Ben. If you haven’t read the previous issues, it’s highly suggested. If not, check out our reviews for issue one and issue two.

Kicking off this issue, we see Murphy as an adult in 2019, his narration stating that the story you are about to read is real life, “not a f***ing fairytale,” hinting at the hard realism the reader is about to endure. In the previous issues of Dead End Kids, writer Frank Gogol used time hops and blank pages to help break up moments and create tension while building momentum. This technique is used here, with a great placement of the title page after Murphy (back in 1999) declares he knows the killer. This break in story causes you to page turn so fast you may cut yourself.

Nearly every page is filled to the brim with tension you could slice with a knife, causing you to charge through the plot, yet stay on each page to soak in every detail (which there are plenty of). Throughout Dead End Kids, Gogol has excelled at creating drama, grief, and many other emotions. One page will make you overjoyed, then the next sad enough to want to abandon ship (but you can’t). This varying of feelings is done with immense skill, as Gogol never goes for cheap or easy emotions. With the motivations of the “villain,” you even feel for him, while still not agreeing with his actions. 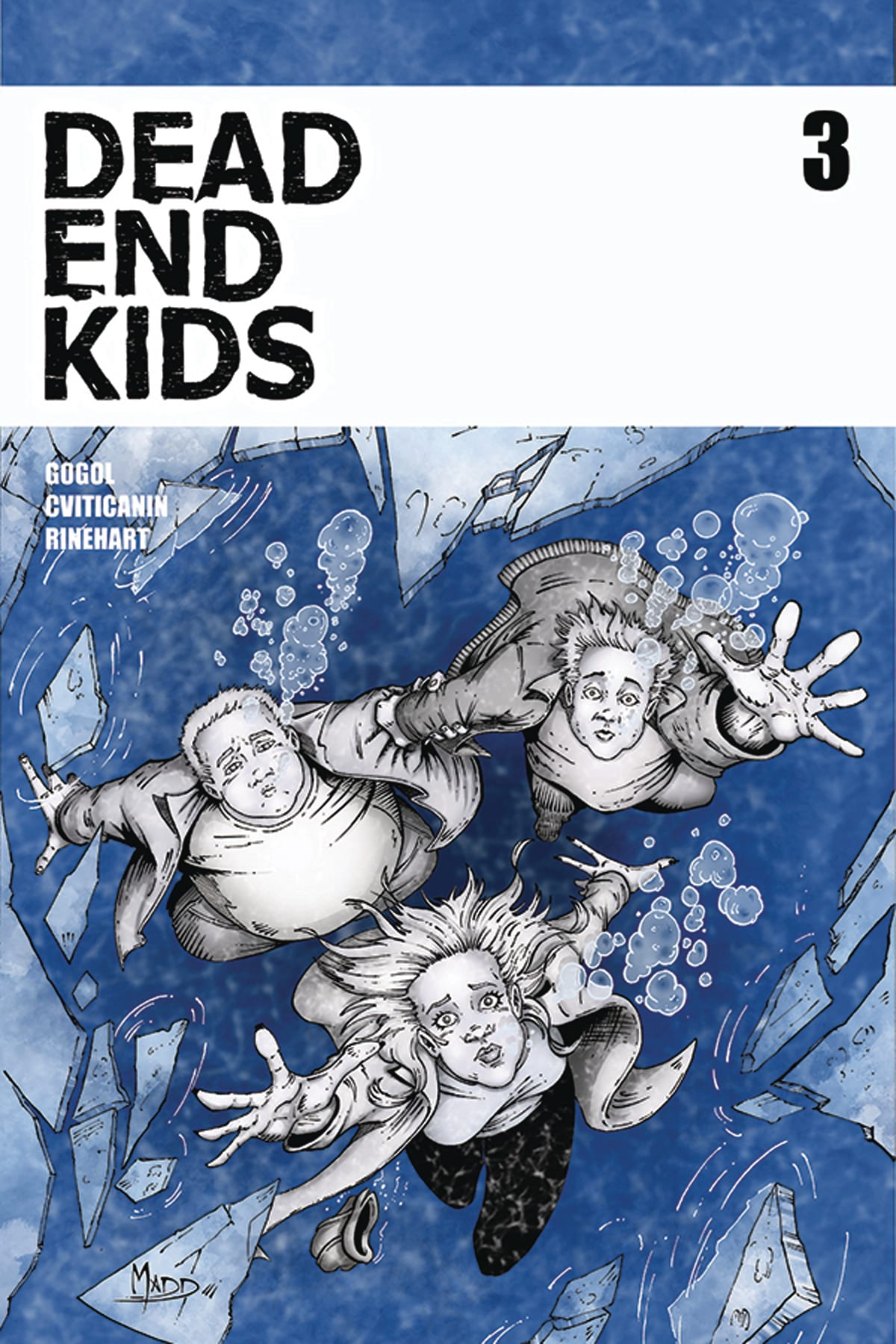 Continuing on art duties for Dead End Kids #3 is Nenad Cviticanin, who hits all the emotional beats that Gogol throws his way. While taking the emotional spectrum up a level with his use of paneling and character actions, Cviticanin also handles colors, which should be noted for the great use of a grey shading for night. The colors added or lost help amplify each scene, especially when portraying the cold night time and “break up season.” With his pencils showing the winter months in near perfection, you can feel the winter chill, as if you were in Alaska.

Cviticanin’s art is soft in a manner that feels inviting, no matter what is displayed. This feeling of softness comes off as human, helping Gogol’s characterization and plot, with it only falling flat in a few moments where the characters feel stiff. But hey, sometimes humans are stiff.

While letterer Sean Rinehart changed colors multiple times in the previous installments for effect, that isn’t seen as much in Dead End Kids #3. But by placing the dialogue bubbles in a varied amount of locations, he continues to help pacing, while hitting the punch when it comes to emotions, by guiding your eyes through the panels. When characters yell, Rinehart helps hammer it home with bold lettering, helping convey emotions, but the best examples would be when characters speak quietly. For these, a small bubble and small lettering is used to help the low speaking of the moment, which – at a critical moment – conveys the emotion on a more subconscious level.

Gogol’s characterizations of the kids and the emotions they go through in Dead End Kids #3 feel real, as if they could be a group of kids down the street. Cviticanin’s art adds to this realism with each panel, making this finale feel like a memoir, not just a comic. Dead End Kids may not be for everyone, as it deals with hard and heavy emotions that some may not enjoy. But this series is amazing in a myriad of manners, with a recommendation for any of those even slightly interested to go check it out.

Memorable Quote: “But life’s not a fucking fairytale.” – Murphy

As someone who is going through personal stuff, this sentence hit hard; so did this series.

What did you think of the finale? And, were you able to guess who the killer was?