Review: DEAD END KIDS #2 Peels Back The Layers On This Murder Mystery

Dead End Kids #2 is out August 21st from Source Point Press, and it’s a haunting reminder of the scars that connect us all and make us human.

As the mystery of Ben’s death begins to unravel, the characters all reflect on their past tragedies and hardships. The series is by writer Frank Gogol and artist Nenad Cviticanin, with letters by Sean Rinehart. The cover is by Criss Madd, and Paul Allor edits the comic.

This issue of Dead End Kids jumps around in time a bit. In the present day, Murphy, Amanda, and Tank investigate their local bully Bulmer’s involvement in Ben’s death. As they do so, the reader gets to take a peek into each character’s past. We get to see why Murphy is so resentful of his foster parents. We see Tank’s parents learn about his heart condition. Even Bulmer gets his turn.

Gogol and Cviticanin flesh out their cast through these flashbacks. The reader learns what makes the characters tick; we’re peeling back their layers. It makes them feel more real, and it builds sympathy, even for the characters that we may have labeled “villains” after the first issue. 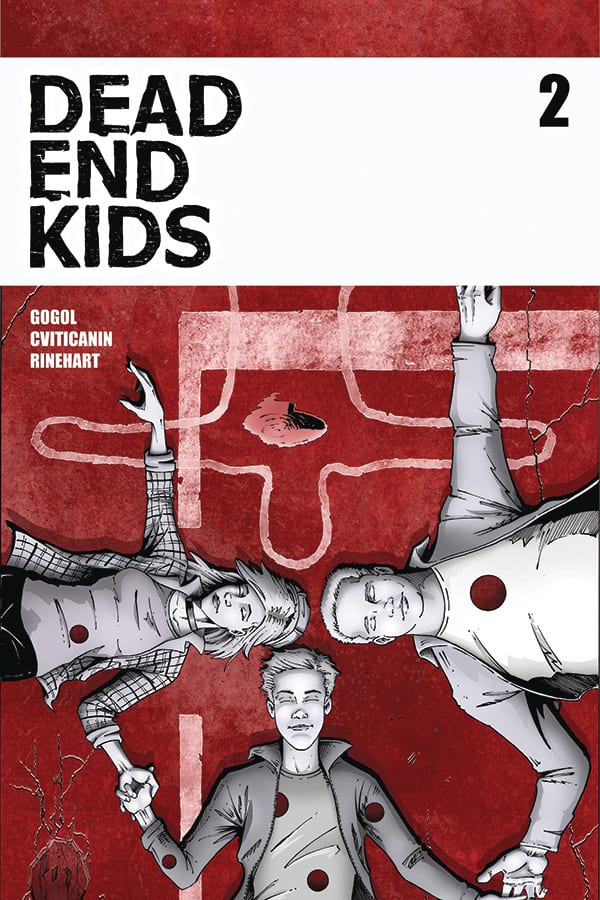 It’s a very personal, and very intimate issue. Yet the present day story – the murder investigation – balances this intimacy with plenty of excitement and intrigue. The murder mystery is the driving force of the plot, and by giving us more insight into these characters, Gogol makes us care more about the outcome.

Cviticanin’s art is a unique blend of cartoony and realistic, which also helps the audience build a connection to the characters. The cartoony aspect allows readers to see themselves in the characters. Then, when Cviticanin adds some additional detail, it helps deliver the intensity. This is an emotional comic, and words can only carry it so far. The art needs to evoke feeling, and Cviticanin’s work does just that. His colors are soft, which adds an almost dreamlike feeling to the atmosphere, playing opposite this otherwise realistic and intense world.

If you like murder mysteries, emotional dramas, or coming-of-age stories in the vein of Stand By Me, you owe it yourself to check out Dead End Kids. Issue one has already sold out; don’t miss out on this cult classic in the making!

DEAD END KIDS #2, a story aptly named "Holes", is an emotional reminder of the scars and trauma that shape us and make us human.Anthony Composto - EICReview: DEAD END KIDS #2 Peels Back The Layers On This Murder Mystery