BLOODSHOT #9: A Cheesy Finale Opens To A Familiar Conflict

Bloodshot #9 out this week from Valiant Entertainment. Tim Seeley works with artists Marc Laming and Jason Masters, colorist Andrew Dalhouse, and letterer Dave Sharpe to close out this arc before it starts to drag. 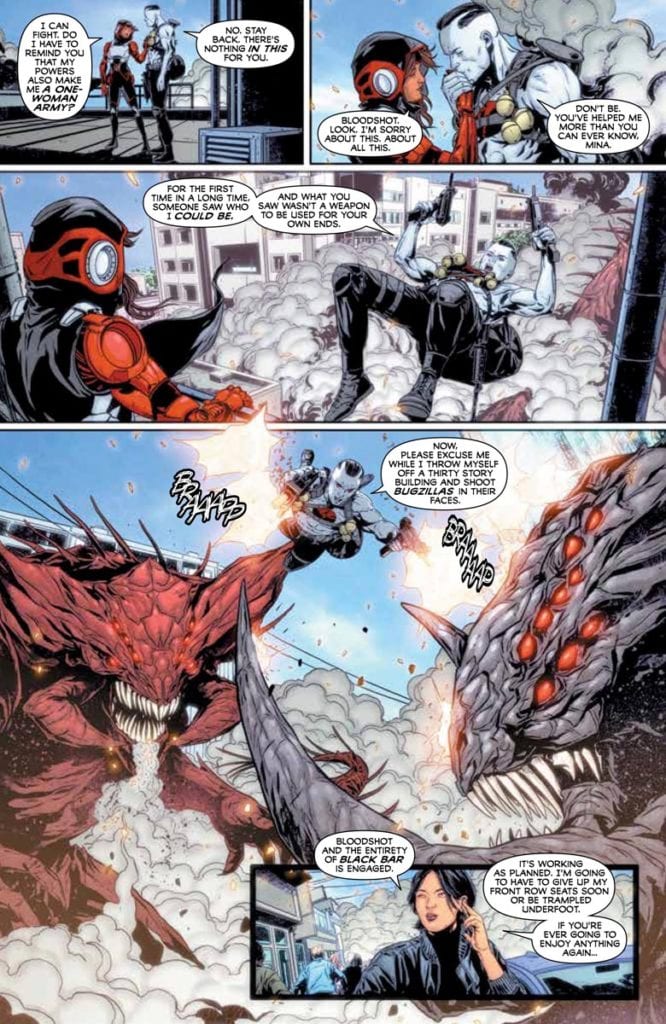 The character of Bloodshot seems to have two faces. In the previous issues, Bloodshot gets the portrayal of the somber soldier. To anyone familiar with his story and how the first few issues react to his monstrous reputation, this feels trite. The character has done a lot of good, sometimes more than other characters like Quantum & Woody. This brings up another side Seeley plays with, the cheesy action hero. Throughout Bloodshot #9, readers see the title character spouting one-liners like when he combats with bug kaiju. Unfortunately, since this issue connects more serious takes, this feels rather jarring. Last issue, Bloodshot could feel the agony of the monstrosities and the Burned inside of him. But now it looks like that plot point was abandoned entirely. Not helping is the return of an old enemy of Bloodshot near the end, sorry no spoilers.

How Art Flips On Itself

Bloodshot #9 returns Marc Laming and Jason Masters to the front. However, their return feels like a cinematic downgrade from Pedro Andreo. Things look fine when it comes to basic actions like the Burned’s invasion of MI6’s headquarters. But when it comes to larger-scale actions, they feel lackluster. After an explosion from a grenade that Bloodshot shoves into the bug monster’s eye goes off the following action, the monster claws at him. The problem is there’s no anticipation from the giant bug; it just happens, not to mention it feels redundant when placed after the explosion.

Then there’s the return of the Bloodshot Reborn t-shirt appearing at the climax of Bloodshot #9. On its own, it helps separate the character from the plot points, but on the greater whole, it feels more like fan service. Neither does this, as well as Bloodshot’s earlier appearance, explain the plot holes involving the lack of scars from the last issue save for flashbacks. Another plot hole comes in the form of a device that only appears on the last page, only for Bloodshot to rip it off without explaining what that device is even for.

Andrew Dalhouse, as the colorist, has his fair share of ups and downs. Most of the characters stand out enough from the action or blend in depending on the circumstance. The Burned, being former spies, would use the muted coloring to their advantage to infiltrate MI6. Then there’s the medical school; while it makes sense that the clothing everyone wears blends in with the white and blues when a monster has similar coloring, it doesn’t feel like a break-in. It would’ve served the plot a little better if the red monster attacked the building instead of the gray one.

Dave Sharpe, on letters, is probably the most consistent of everyone in Bloodshot #9. As someone with a lot on his plate, he has to efficiently and carefully use word balloons and wordmarks. Sharpe always places each in ways that enhance what takes place. The more unique the action, the more unique the word mark. Electric shocks feature blue-lined stylizations while bodily harm resembles bodily fluids. But then some enhance effects that don’t make any sense. Like why does Nix end up burning when his subordinates don’t? Bloodshot didn’t even use any equipment that does that in his scuffle with Nix.

Bloodshot #9 Patches Up Everything

In all consideration, Bloodshot #9 looks like it was made in a rush to close out The Burned arc. This leaves the finale with many plot holes, some generic action scenes, and a cliffhanger that feels uninspiring. Especially for readers reading this issue in sequence with previous ones.

Bloodshot #9 ends the Burned Arc with a disappointingly plot-holed mess.BLOODSHOT #9: A Cheesy Finale Opens To A Familiar Conflict