‘The Beguiled’ Movie Review: A Dangerous Lesson In Repression

‘The Beguiled’ Teaches That Being Bad Feels Oh So Good

Everything about The Beguiled is a masterfully crafted. From lighting to score and every last piece from the art department, no stone is left untouched. Hollywood usually doesn’t see a film with this much craftsmanship so I hope other artists take notice. It comes as no surprise that The Beguiled earned Sofia Coppola the Best Director award at Cannes.

Writer/director Sofia Coppola wastes little time jumping into the action but knows how to still keep you on edge. With the first slow pan down, you know this is going to be a beautiful film but, that beauty is also haunting. It’s genius how something intended to be so innocent ends up making you feel uneasy. A house full of women nursing a soldier back to health should be harmless. Sadly for everyone involved, it’s not.

The Beguiled follows Miss Martha (Nicole Kidman) and her boarding school of girls (Kirsten Dunst, Elle Fanning, Oona Laurence) taking in Union soldier John McBurney (Colin Farrell). In an attempt to be good Christian women, their kind gestures turn into an erotic & twisted tale. Not much is different from the novel or 1971 film but, Sofia Coppola turns up the maturity to an eleven. The women here use raw feminine sexuality to entice John but send shivers down the audience’s spine. The viewers know the underlying jealousy between the girls and it makes every glance much more uncomfortable. Not since Jane Eyre has glancing and small touches meant so much.

Every bit of this feels like a pulpy soap opera but much more refined. The maturity when dealing with scandalous subjects allows it to pack more of a punch. My favorite example of this is the apple pie scene, in which the girls are all trying to impress John with talk of apple pie. So many innuendos to make you giggle and gasp.

“It seems the enemy… it’s not what we believed.”
-Martha Farnsworth (Nicole Kidman) 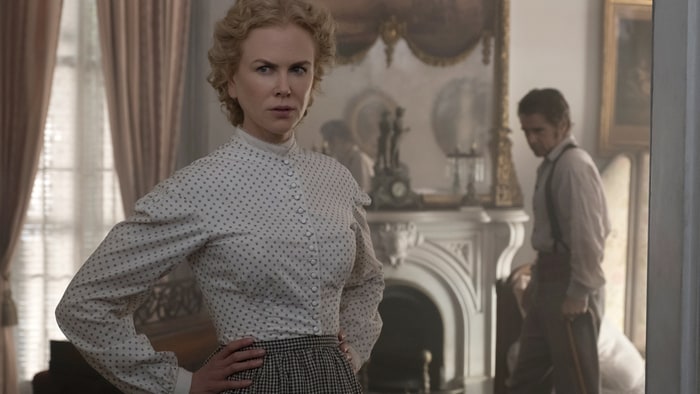 Moving to the technical side, everyone behind the camera shines as much as the material on camera. Cinematographer Philippe Le Sourd steals the show with his visuals. He has a way to make an establishing shot take your breath away. The 1.66:1 aspect ratio is also a welcomed change as it’s usually only for classic animation or foreign films. It’s just another subtle touch that brings so much. Le Sourd’s French stylings feel majestic next to the Hollywood blockbusters. Less is more with this film.

The Beguiled is something that will easily receive Oscar hype. Not diving into everyone so early, I’ll say that Stacey Battat is a shoe-in to grab Best Costume Design. Each piece feels real but still hyper-stylized like Sofia Coppola’s previous work. It also helps the story centers around outfit choices and little nuances. Never thought a shoulder-less dress or a brooch could cause such an uproar.

Another technical achievement is the haunting score that sets the mood or plays with our emotions. Like the costumes, the composer Laura Karpman basically becomes another character. Never does the music distract from the action but perfectly compliments it.

Without a doubt, The Beguiled is the best film I’ve seen this year. In the land of massive productions, the simplicity of this is welcomed. Don’t confuse simplicity with being average though. Sofia Coppola scales back her grandiose style to craft a focused narrative.

Every actor puts in some major work as no one feels to be running on auto-pilot. Colin Farrell comes alive on-screen for the first time in years. Kirsten Dunst puts on a clinic and proves why’s she is Coppola’s muse. The real star is Nicole Kidman as the headmistress of this school and a woman longing for more. Even a tiny up & down glance from Kidman packs so much weight. This could be one of her best performances ever.

You know you’ve crafted an amazing film when my only complaint is I want more!

“At a girls’ school in Virginia during the Civil War, where the young women have been sheltered from the outside world, a wounded Union soldier is taken in. Soon, the house is taken over with sexual tension, rivalries, and an unexpected turn of events.”

See The Beguiled in theaters now!

Let me know what you think of this film and my review below!

'The Beguiled' Movie Review: A Dangerous Lesson In RepressionIt's hard coming up with complaints about this film. When the only negative thing to say is it needs to be longer, you've hit perfection. As haunting as this world is, there's a craving to see more drama unfold. It's like the most stunning car crash ever caught on film.