YOU ARE DEADPOOL: A Narrative Comic Book Store

You Are Deadpool is several things: it’s Deadpool at his most meta, another masterpiece by “Al Ewing,” and a comic book mashed with a tabletop game. By using issues of the series as campaign scenarios along with two (or more) dice, the player embarks on a trial and error based time travel campaign. But perhaps most of all, it’s a comic about comic book store culture. Yes, it’s a thing. Now to understand anything about this culture, there are some important subjects to go over, because this stuff can get comprehensive and overwhelming for first-timers. Below is the research from the gutters.

What Is You Are Deadpool? 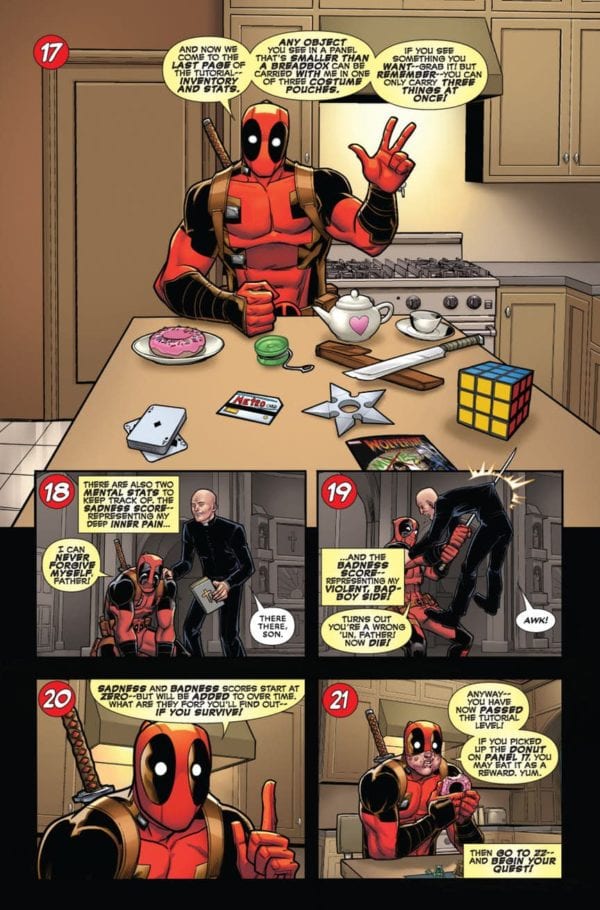 Deadpool requires little introduction for even non-comic fans. Whether it’s Ryan Reynolds’ portrayal on the big screen or the comics written after Rob Liefeld, Deadpool is a snarky fourth-wall-breaking mercenary with a healing factor that makes him close to immortal. His entire history revolves around being a funny meme or a sad clown. Some of the best Deadpool attributes, however, come from his resourcefulness in reaction to comics’ absurdity. All of which makes Deadpool an entertaining character to play as in games. But while video games like Marvel vs. Capcom 3 and the Deadpool video game keep to the memes, tabletop games offer more variety. 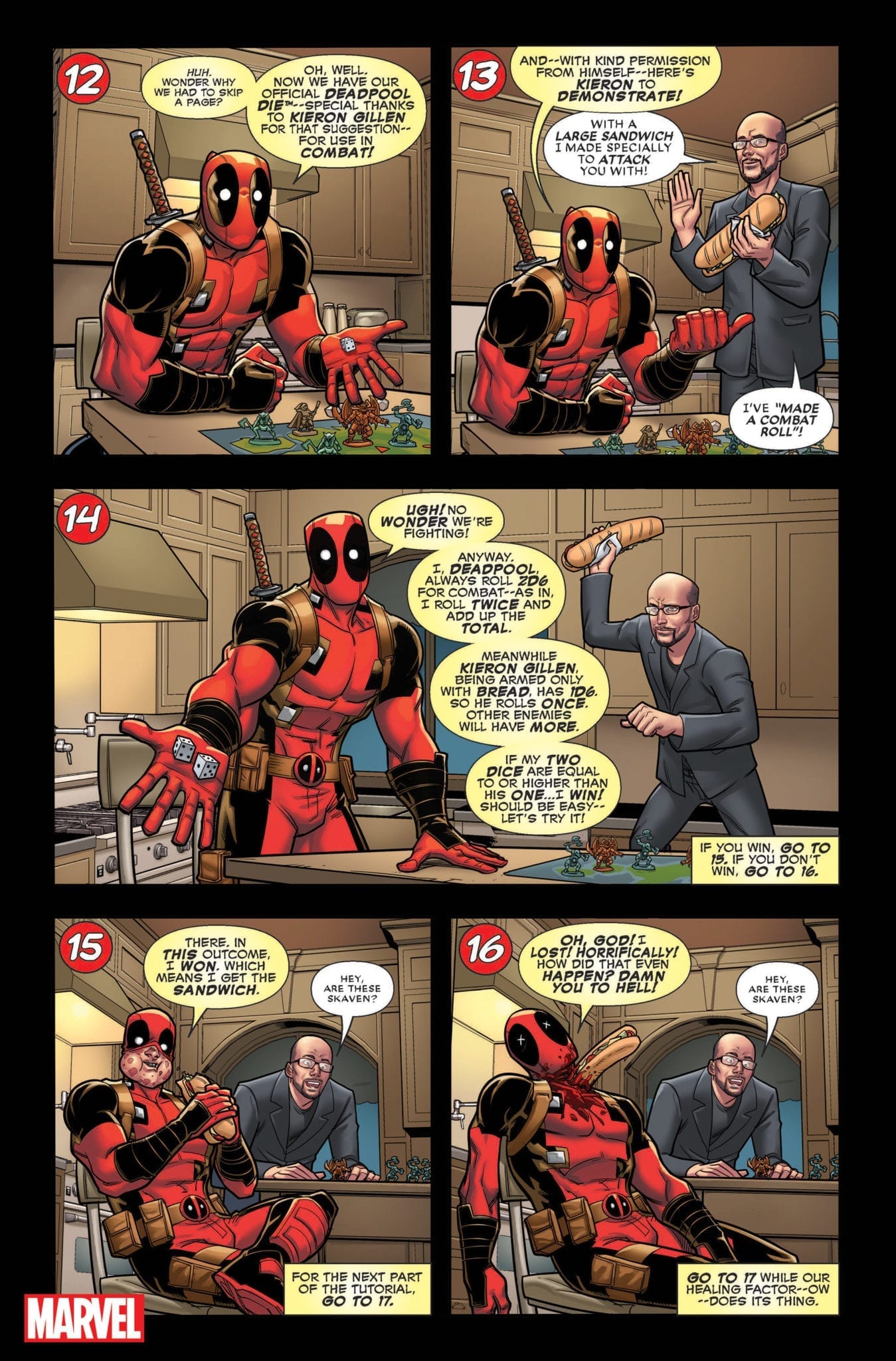 You Are Deadpool, written by Ewing with art by Salva Espin, is the concept of Deadpool in a Dungeons & Dragons-esque situation. But instead of game masters and absurdly named weapons, it’s a game of resource management and morality, each of which plays into the scenarios where Deadpool is sent through time to different comic eras. At the suggestion of Kieron Gillen, players make use of two dice in combat against a usually higher number of dice. Given the stakes, resource management and memorization is a necessity to progress through. Meaning much like with Deadpool, the reader/player will either feel accomplished or too frustrated to finish and just get another comic from the store.

The Culture of a Comic Book Store

Comic book stores themselves have a semi-unique culture to them aside from putting overpriced monthlies on shelves. It’s a place of community for pop culture lovers to share their passions. On their best days, they’re like less expensive conventions complete with guest appearances from comic artists. And for those who wanna do something other than stick noses in inked paper, there’s often a space to play tabletop games. From Magic the Gathering to Dungeons & Dragons, there’s something for everyone.

You Are Deadpool (His Other Voice Anyway)

Deadpool appeals to everyone despite being strictly advertised for more mature teens. It’s through that very popularity that readers get a first look into how comic stores work.

Some people get intimidated by comic stores because of how overwhelming they can be from intimidating book organization to staff uninterested in newcomers. People like Eric Ravenscraft recommends going with the flow instead of starting from the beginning. Because like meeting people for the first time, it’s best to follow from a fresh start. You Are Deadpool follows that same logic by giving readers minimal background and the choice to play Deadpool the way writers like Daniel Way depict him. Who knew tabletops had so much in common with comics?

Comics Are The Game 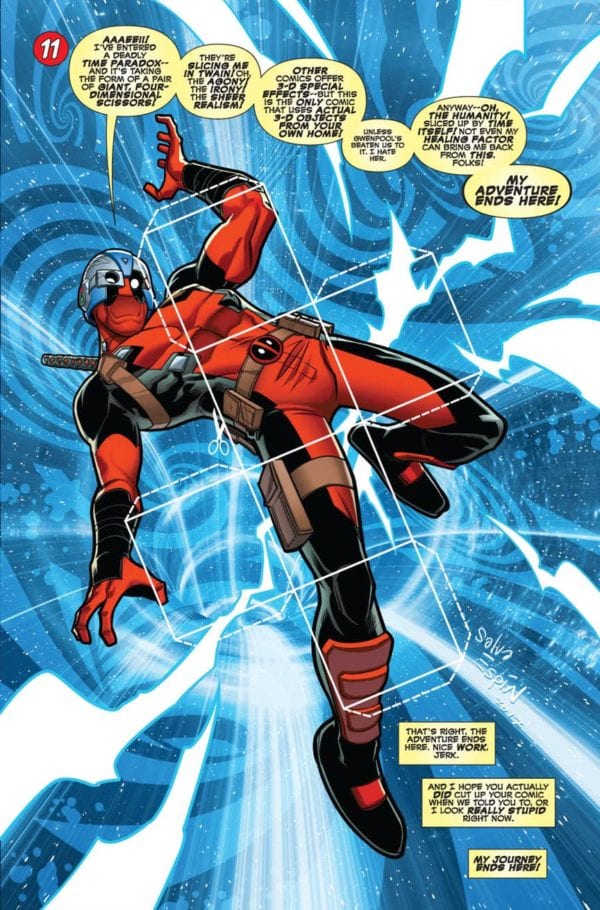 While readers get to know Deadpool through gameplay, they also get an introduction to another part of comic shops. As stated previously, the stores include both a space to play and get the means necessary to play tabletop games. Unlike video games (which tend to support manga more than western comics), tabletop games offer a more hands-on approach. As such, games like D&D and Magic offer more social, cognitive, and innovative play styles.

Because why go one way when you make a visit memorable. Some of the best comics feel like you are living in the comic’s world. Some of the best comic shops meanwhile feel like being in a comic. “Jay and Silent Bob’s Secret Stash” have the aesthetics while “Vault of Midnight” goes out of its way to make the medium accessible. From podcasts to exhibits, people can see comics in all of their glory. Somebody has to make decades of history accessible.

You Are Deadpool (The Comic Historian)

One of Deadpool’s notable tools is his use of Marvel Comics history. The time travel plot helps reinforce this by reintroducing concepts from all around Marvel’s history. From the most obscure characters like Master of Kung-Fu‘s Super-Midnight to ridiculous tropes through the Grasshoppers. Even A-Listers get their time in the limelight for a short while, like the Fantastic Four, Daredevil, and Captain America (as Grasshopper). While this seems paradoxical from the getting into comics intro, generating interest in the past is what can get more people to comic shops. Because let’s face it, tabletop comics can get boring alone.

Thankfully, playing You Are Deadpool doesn’t just amount to fans of the character but anyone interested in visiting a comic shop. Aside from getting a few monthlies, maybe people will have an interest in staying for more. Maybe they can even bond with fans over a story or play a game or two. Marvel UK even released a You Are Deadpool RPG set to go along with the comic. Who knows, maybe somebody will even have an event dedicated to the concept. Too bad it can’t do something about comic stores problems with age gaps.

But what about the rest of you? Still, find comic shops to be a little overwhelming, or are you willing to try something a little different? Leave your thoughts in the comments.