Why You Should Be Reading MR. & MRS. X

The first volume of Mr. & Mrs. X, “Love and Marriage”, is out this week from Marvel Comics, chronicling the new adventures of X-Men Rogue and Gambit as a married couple.

Mr. & Mrs. X picks up after Rogue and Gambit’s wedding in X-Men Gold. Like, immediately after. While on their honeymoon in space, the couple is called to action and thrown into the middle of Shi’ar royal family drama. Also, Deadpool pops in for a couple of issues.

“Love and Marriage” collects issues 1-6 of the series, all written by Kelly Thompson. Oscar Bazaldua and Frank D’Armata did the art and colors for the first five issues, while David Lopez and Nayoung Kim worked on issue six. Joe Sabino lettered the series, with the exception of issue two, which Travis Lanham lettered.

This is the definition of a character-driven story. There’s plenty of action and intrigue, but that’s not what drives the book. Rogue and Gambit drive it, both as individuals and as a couple. Despite this being a space adventure, Thompson has written a very grounded and relatable story about relationships. The two lead X-Men have palpable chemistry. Their dialogue and the way they bounce off one another feels like a real relationship (a real relationship, with love, and friction, and sexual tension all interwoven, and not a “made for TV” relationship). It’s fun to read. These characters are likable. And they’ve had such a complicated relationship for so long, that this story will pay off especially well for fans who have been following this duo for years. 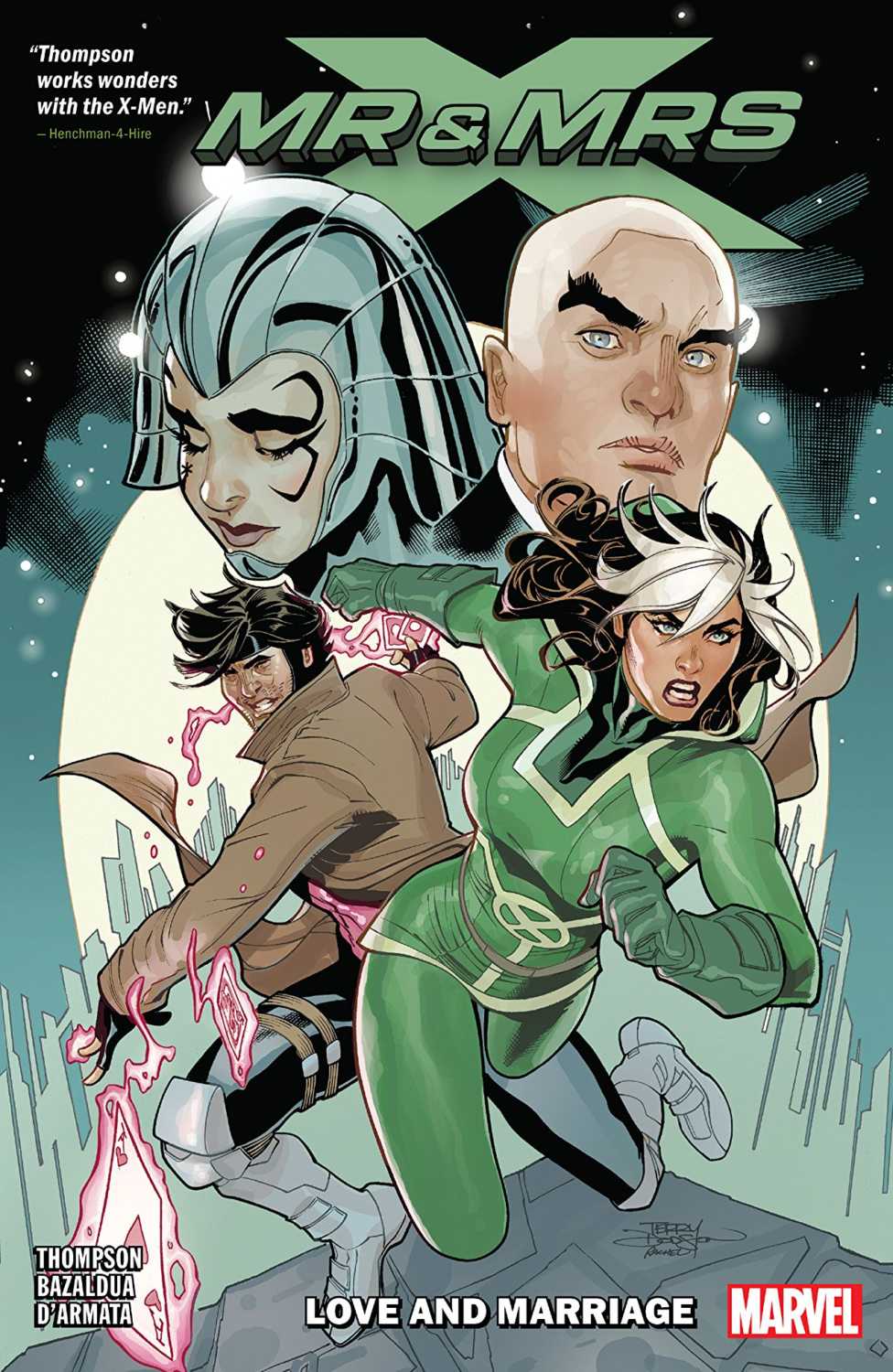 On top of the great relationship content, Thompson also peels back some layers on Rogue and Gambit as individuals. She digs into their fears and their desires. The two are vulnerable at times (which again circles back to the relationship stuff, because one of the scariest things about being in love is letting your guard down). All of this just helps to make the characters feel more real and relatable, building on the reader’s connection to them.

Bazaldua and D’Armata’s art through the first five issues is the perfect blend between action and comedy. The fight sequences are just what you would expect from an X-Men title, and the colors are surreal, which is what you want from a cosmic story. It creates this otherworldly tone. But then the facial expressions deliver so much feeling and humor that you remember this is a comic about the people first and the action second. Lopez and Kim then pick up the baton for a one-off story in issue six, and it feels like something completely new compared to the rest of the collection (in a good way). Their story is based around an engagement party in Gambit and Rogue’s apartment, so it trades the cosmic vibe for something more traditional. This is perhaps the strongest story in the set, because it focuses solely on the heart of the book: the couple’s relationship.

The biggest downside to this volume of Mr. & Mrs. X is that the pacing feels somewhat erratic. The story feels rushed at times. But again, the plot itself isn’t the crux of this comic; it’s the characters. So it’s understandable that the team would maybe tell a quick and simple story in order to focus more on the character moments. Still, if you’re a reader that prefers story to character, this may put you off.

Bottom line: if you love funny and heartfelt stories about couples who bicker and banter, but who ultimately have each other’s backs no matter what, you need to be reading Mr. & Mrs. X.

You can buy MR. & MRS. X Volume 1: “Love and Marriage” at your local comic shop.

Review: Look Beyond the Surface of FIRE POWER

Review: SUPERGIRL #40 Asks When Is A Finale Not A Finale?