When Determination Knows No Bounds In BATGIRL #47

BATGIRL #47, available now from DC Comics, is about to tie Batgirl’s plot with all of the chaos and danger that has been born from Batman’s series. As it turns out, no character is safe from the rampage that is occurring.

The events in Batman’s series have been steadily affecting all of Bruce Wayne’s protege, and arguably with good reason. It’s not like the Joker has ever been known for mercy, and he’s proven determined to make Batman hurt.

Thus fans are about to find Barbara Gorden wrapped up in a mess in Batgirl #47. This moment was teased (and with terrifying effect) in the conclusion of last month’s Batgirl. Now to see how it all plays out.

They say that eventually, everything will come full circle. Perhaps that is true. In Batgirl #47, readers will find a series of events alarming similar to Barbara’s past – with several twists, of course. Barbara has grown a lot since that fateful moment – a moment that has haunted her for years.

Cecil Castellucci has proven, time and time again, that she can handle tie-ins, and do so in creative ways. This time around, The Joker demands full attention, leaving little room for subplots. Yet there are still tendrils to be found, reminding readers of everything Barbara stands to lose. And to fight for.

This is an issue that presents itself as a nightmare, while really providing Barbara with that chance to face her demons. That’s the Joker, for anybody that missed it. Her past has frequently been defined by this monster. Until now, both Castellucci and Barbara put their foot down this time.

As such, this is an issue as empowering as it is harrowing. It’s precisely what Batgirl’s story needed when it comes to facing off against the Joker. Now to see how it’s going to play out from here.

If you’re reading any other DC series right now, you might have some questions. Such as how Batgirl can be in two places at once. Presumably, there’s something going on here, but it has yet to be explained.

Intentionally or not, some interesting mirroring elements are going on here. The conclusion of Nightwing #72 left Batgirl unconscious, with Punchline, Joker, and Nightwing standing above her. The ending for Batgirl #47 also concludes with Batgirl being unconscious, but she isn’t alone.

It’s hard to consolidate those two scenes. No matter how you look at it, Batgirl is left in a vulnerable position. In one scenario, she’s fighting to save her friend. In another, she’s standing up for herself – and everyone she loves.

Ultimately, readers are left with many questions. Questions that the rest of The Joker War will hopefully answer in time.

The artwork inside Batgirl #47 was perfectly capable of keeping up with all of the turmoil and intensity thrown at it. This was a battle through and through – including a battle of the minds and wills. Batgirl’s determination was showcased beautifully here, complete with a visual representation of how far she’s willing to take the fight.

Robbi Rodriguez was the lead artist for this project. Their lines resulted in a dramatic confrontation between Babs and Joker becoming something so much more. The expressions on both characters hit all of the extremes possible – which makes sense, given who we’re talking about. The fight scene was compelling, as was everything revolving around it.

Jordie Bellaire provided the colors, and they likewise did a wonderful job here. The colors are bold and pop from the background, with certain elements demanding attention. Blood dripping down Joker’s pale face, Barbara’s bright hair, the bright blue of electricity short-circuiting. It all enhances the story.

Finally, Andworld Design was responsible for the lettering, and it was the final touch this issue needed. The placement and repetition of lettering here were shockingly intense, adding so much to the story – and the fear of what was to come.

Batgirl #47 was a compelling addition to the Joker War, providing Barbara with a chance to shine brighter than ever. The intentional mirroring to the past increased the fear and tension while allowing for a moment of catharsis. 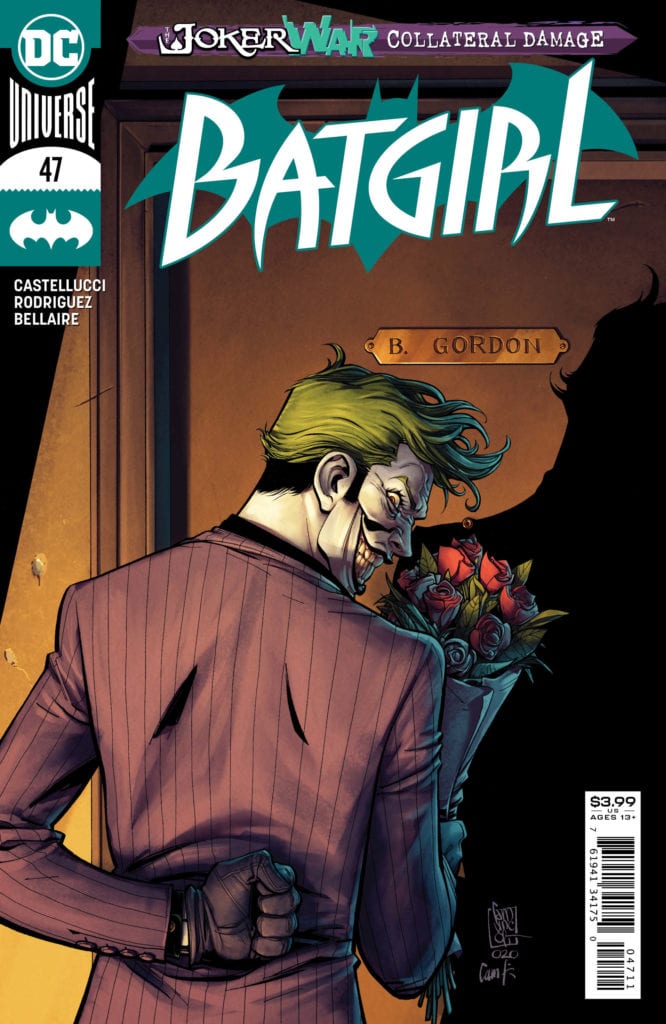 Batgirl #47 is a brilliantly written tie-in, one that did justice to Barbara Gorden. Combined with beautiful artwork, this is an issue worth reading. When Determination Knows No Bounds In BATGIRL #47