Image Comics announced Twisted Romance this week, a 4-issue weekly anthology series written by Alex de Campi with a rotating team of artists. The series will focus on love, “love gone right, wrong, and everything in between.”

“This project is a dream for me,” said de Campi in the official press release. “I’m getting to collaborate with some of comics’ coolest creators and some amazing prose fiction voices. Everything everyone is doing looks so amazing. I’m just giddy that Image basically handed us the reins and said, ‘do whatever you want. This looks cool.’ So, yeah: come February, we’re going to break your heart, fill you with joy, and give you awkward pants feels. Sometimes in same story. Occasionally, even on the same page.”

Each issue of Twisted Romance will be 48 pages long, and will feature a main comic story, a backup comic story, and a prose story. The series will cover a variety of themes, “including the commoditization of breakups, the love of a shy girl and a wildly famous guy, forbidden love on an intergalactic dreadnought, and the deceptive lure of childhood as seen by a princess who’s afraid to grow up.”

Image will be releasing sneak-peeks at all four issues throughout December and January. Monkeys Fighting Robots will host the exclusive sneak-peek of issue two on January 8th. EW.com, SYFY Wire, and A.V. Club will host the other sneak-peeks.

You can see all four covers for Twisted Romance as well as solicitation info and quotes from the artists here:

“I’m thrilled to be working with Alex,” said Skelly. “I think our comic will show off our love of ’70s film—and the darkest reaches of our brains. It’s going to be such a standout on the comics stand. I think the right people will find it and really appreciate it.”

“I am psyched to work on something bold and heartfelt, a story that knows where it’s going from the outset, that may end up somewhere surprising, but that surprise will be perfect,” added McNeil. “That’s the best thing, always.”

“Being the comics baby of the bunch, I’m really excited for people to see the fun world we’re creating,” said Gutiérrez. “Honey, get into this boots-the-house-down realness for your nerves!”

“Alex is an incredibly versatile writer!” said Trungles. “I love stories that explore the nature of love and agency, and I’m really stoked to work on this one.”

Keep it tuned to Monkeys Fighting Robots, and be sure to come back in January for your exclusive look at issue two! 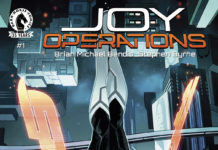 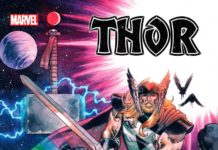 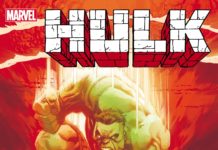 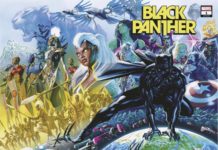