Review: The Trip to Arkham Goes Wrong in THE FLASH #87

The Flash Heads to Arkham

The Rogues’ Reign has come to an end. While struggling to control their powers, The Flash Family joins with the Rogues to overthrow their leader, Captain Cold. When facing the tyrant, it’s revealed that he also had received overcharged powers from Lex Luthor. This leads to a superpowered slugfest between Barry and Snart while the others pulled Central City out of Mirror Master’s realm.

When they get out, however, Barry begins to bear down hard on Cold, nearly killing him. Even though it was an accident, the Scarlet Speedster requests to be taken away to Arkham with Cold. How will this change affect the speedster’s life? 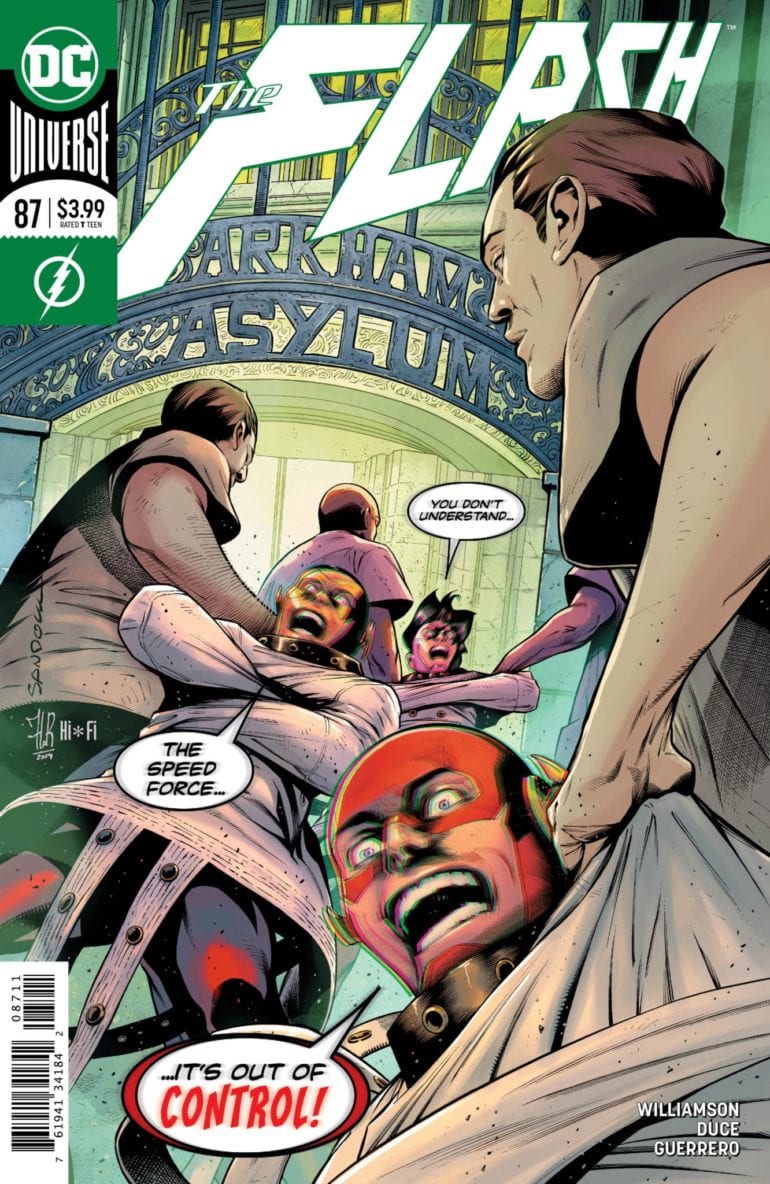 We pick up shortly after the last battle with Flash and Cold on their way to Arkham. Barry tried to talk to his oldest enemy, but Snart tells him to shove it where the sun doesn’t shine. The speedster doesn’t let up, trying to make a comparison between the two’s pasts. Cold turns this line of thinking on its head by pointing out that with Barry almost killing him, they are alike.

Meanwhile, Iris takes Wallace and Avery to Meena Dhawan at STAR Labs to try and slow them down. Meena points out that the overcharged Speedsters’ vibrational frequency is entirely out of control. This revelation gives Iris an idea to save both of them and the Flash. 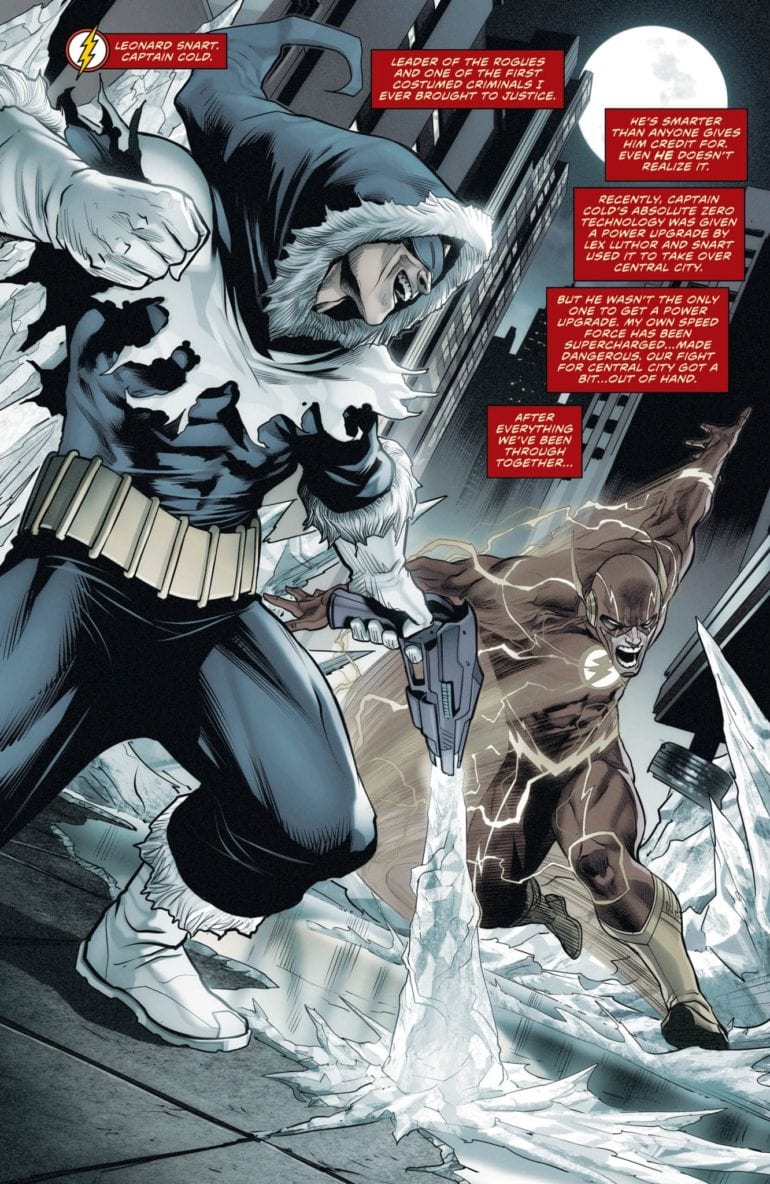 This issue fell flat after a great set up in the last issue. The way that the last issue’s ending was set up, it implied that Barry would need to carry the burden, both physical and mental. Instead, we have it ultimately pushed aside through a deus ex machina. This could have potentially been an interesting character arc for the Flash. 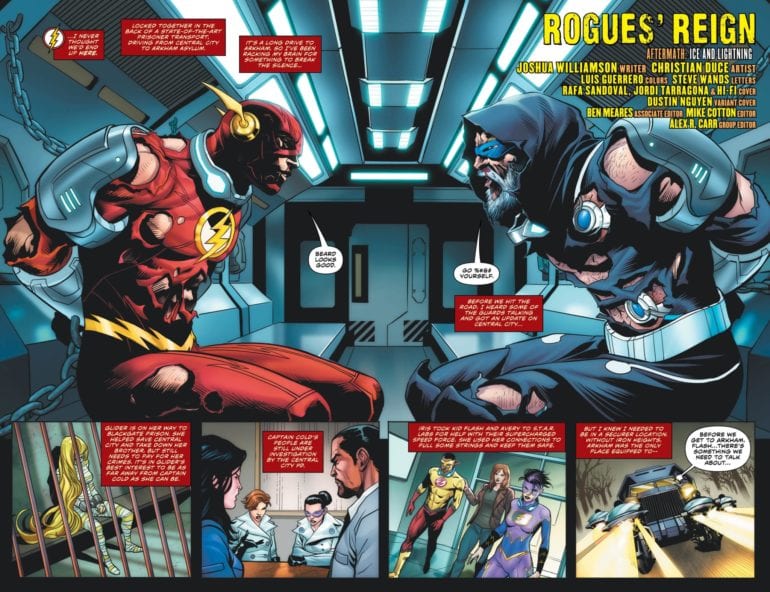 Along with the wasted potential of a great arc, we’re just left with tons of questions on why did the issue play out like this. Why are villains of Central City, which is usually portrayed in the center of the country, being transported to the coast by a special metahuman truck? How did the Flash Family not realize their vibrational frequency was off? How is our surprise guest able to fix them in the span of two pages? It’s questions like these that really bog down the enjoyment of the issue and the arc as a whole.

The only highlight is the cryptic ending for the upcoming arc. It’s shocking but also has been building towards for a while. While it is an exciting prospect, it isn’t enough to save this issue. 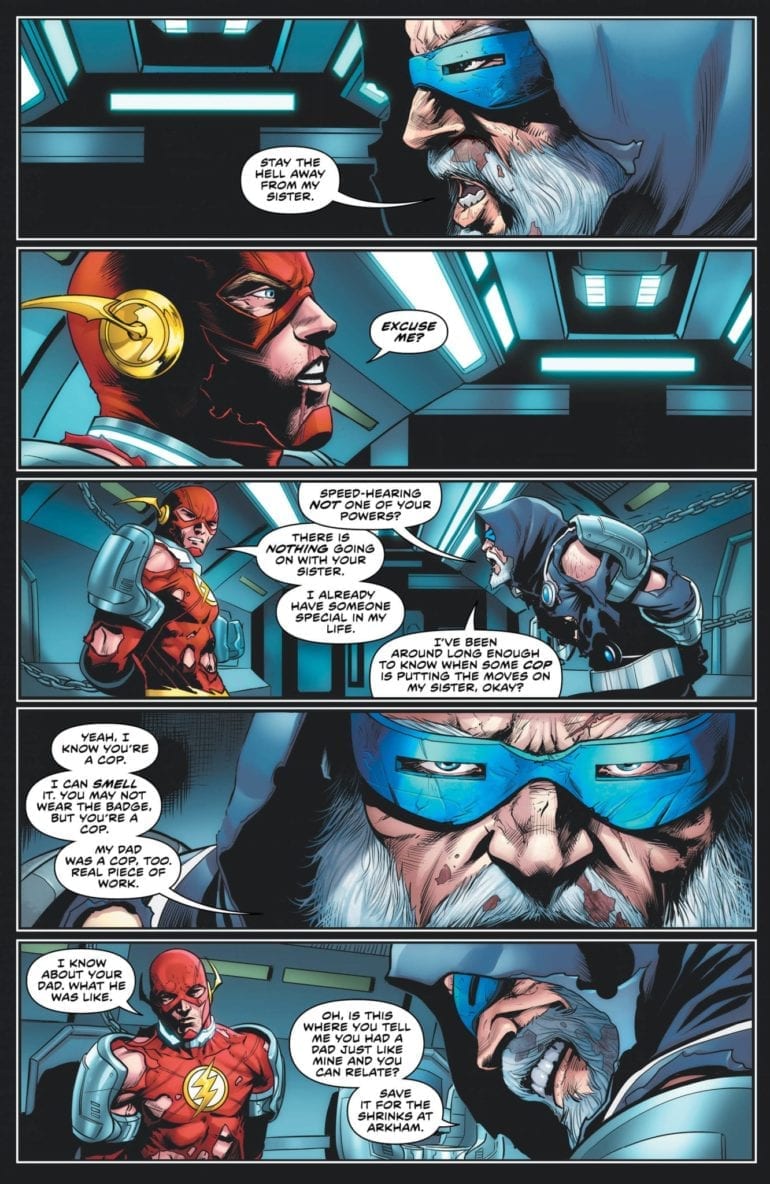 While the story was problematic, to say the least, Christian Duce’s art continues to amaze. While there isn’t much in terms of action, the detail he puts in every character is something to applaud. The conversation between Cold and Flash is full of raw emotion as they go back and forth. It will draw in many fans of not just the series but intense conversationalists as well. The story may have been the downfall of this issue, and the art makes it a beautiful story to look at.

In the end, this issue was a lackluster epilogue to the Rogues’ Reign. Where the last issue set up a potential game-changer to the Flash series, it’s quickly discarded. This story should have been stretched out to two issues and allow these fantastic ideas to breathe. Instead, we have it shuffled off to make way for the next arc. The art team does a damn fine job in delivering one of the series best-looking issues. While the next arc promises to be an epic one, this issue did no favors in tying up the previous. It was just a disappointing issue of the Flash.

The epilogue of Rogue's Reign ends up pushing out potential status quo changes to make room for the next arc.Review: The Trip to Arkham Goes Wrong in THE FLASH #87