Review: THE FLASH #86 Sees The Fall of Cold and Barry

The Flash Finishes Off The Rogues’ Reign

Captain Cold is on the rampage. After taking over Central City with an upgrade from the Legion of Doom, most of the Rogues realize Snart has gone off the deep end. They proceed to release and train Flash and the other speedsters as it’s revealed their powers have been overcharged. After spending time and learning, they really aren’t so different, the team prepares to go after Mirror Master. When they arrive to steal his mirror, Cold is there waiting and proceeds to freeze the heroes. Leaving just Flash unfrozen, Snart takes on his enemy for the fate of the city. Will the Scarlet Speedster save the city? 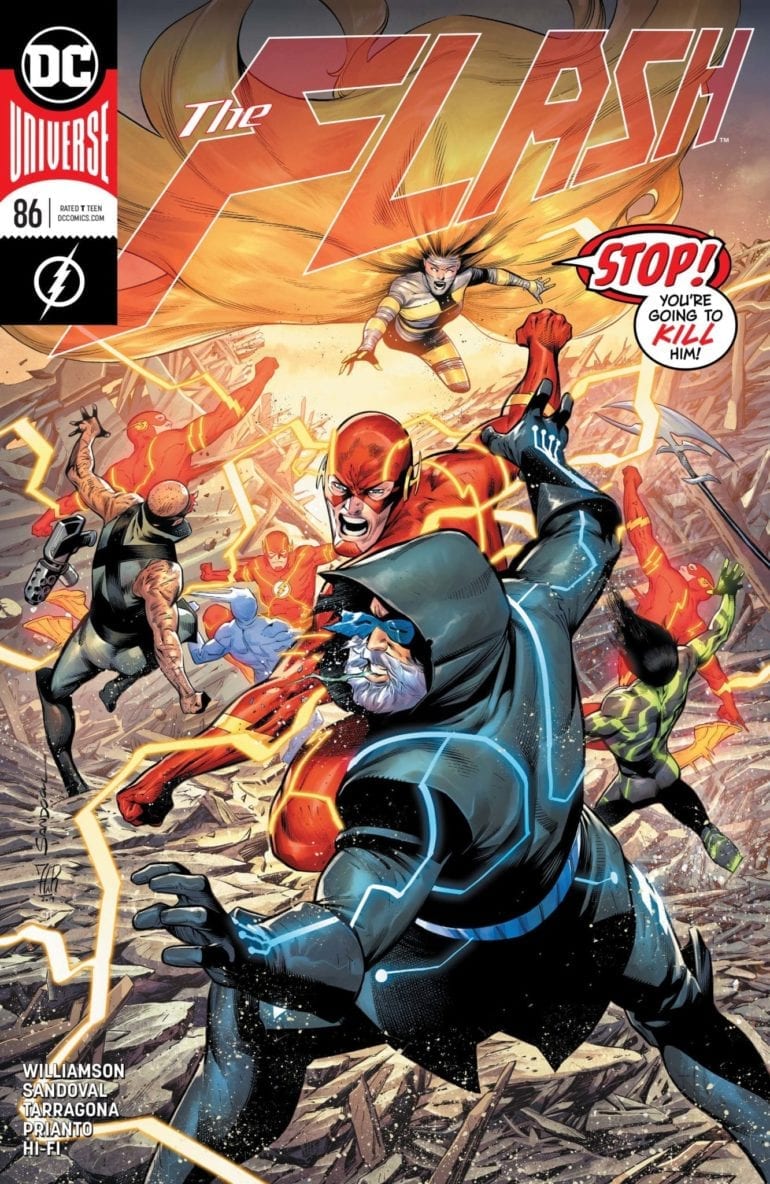 Picking up right where we left off, Flash and Cold begin to go all out on each other. Due to the upgrade from Luthor, Snart is able to freeze the very atmosphere around the battlefield. This ends up helping the Flash regain control of his overcharged powers and ends up freeing the trapped heroes and Rogues. While Barry deals with Cold, the others drag Mirror Master back to his mirror that created this frozen hellscape.

It turns out the only reason he rejoined the Rogues in the first place was to try and win back Golden Glider. Once she makes it clear they could never work again, the rogue gives in and brings the city back to reality. 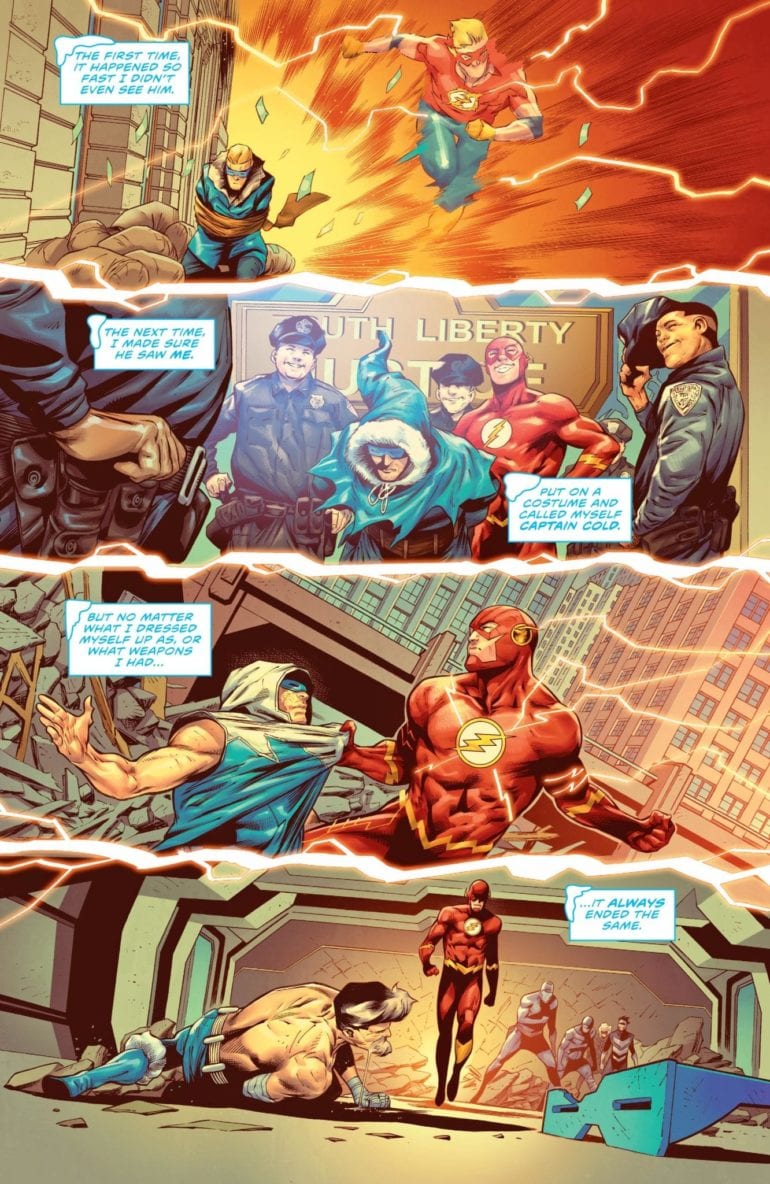 The end to Rogues Reign wasn’t as grand as I was hoping, but it still did a good job in a few aspects. Along with the action, the personalities of the Rogues continue to shine as more human supervillains than we get nowadays. While Golden Glider is the most prominent, you can tell that the Rogues care for one another and just want to get out of this situation alive. When you see her try and talk down her brother, you can tell they’re family before all else. It would bring a smile on my face even if the ending didn’t turn out positive.

The complaints I do have is for our hero and villain. Both go too far off their usual characters and make them either irredeemable or just plain stupid. While Cold turning on the other members of the Rogues isn’t uncommon, him turning on his sister is flat out unbelievable. As for The Flash, he does something that is completely out of left field and will leave readers scratching their heads. 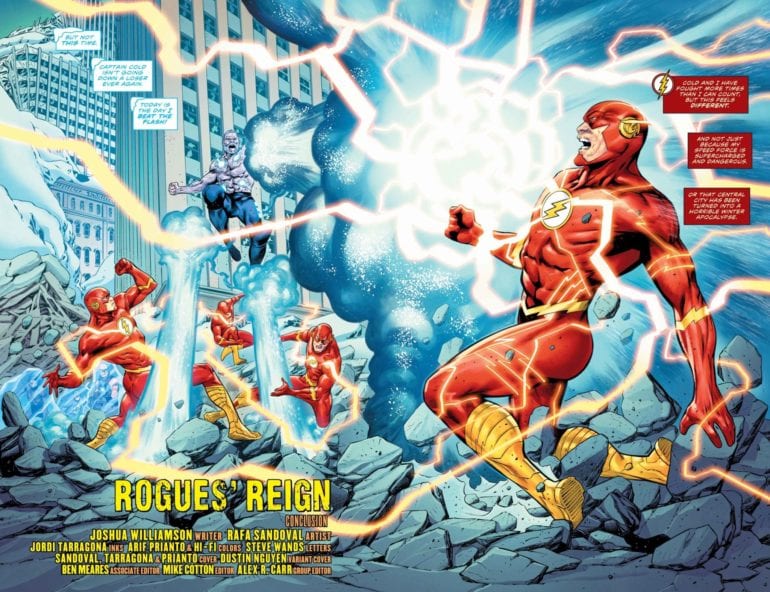 Rafa Sandoval delivers a fantastic look for the finale of the story. His style complements the powers of Flash and Cold when they go all out against each other. He also is able to make more emotion-filled faces to carry the weight for the slower moments. The best moment actually comes near the end of the issue where Barry is beating on Snart. The lettering is designed in such a way where we can’t see Glider’s pleas and helps build the overall tension. Add that with Sandoval’s illustration of this beating, and it’s a moment this reader won’t soon forget. 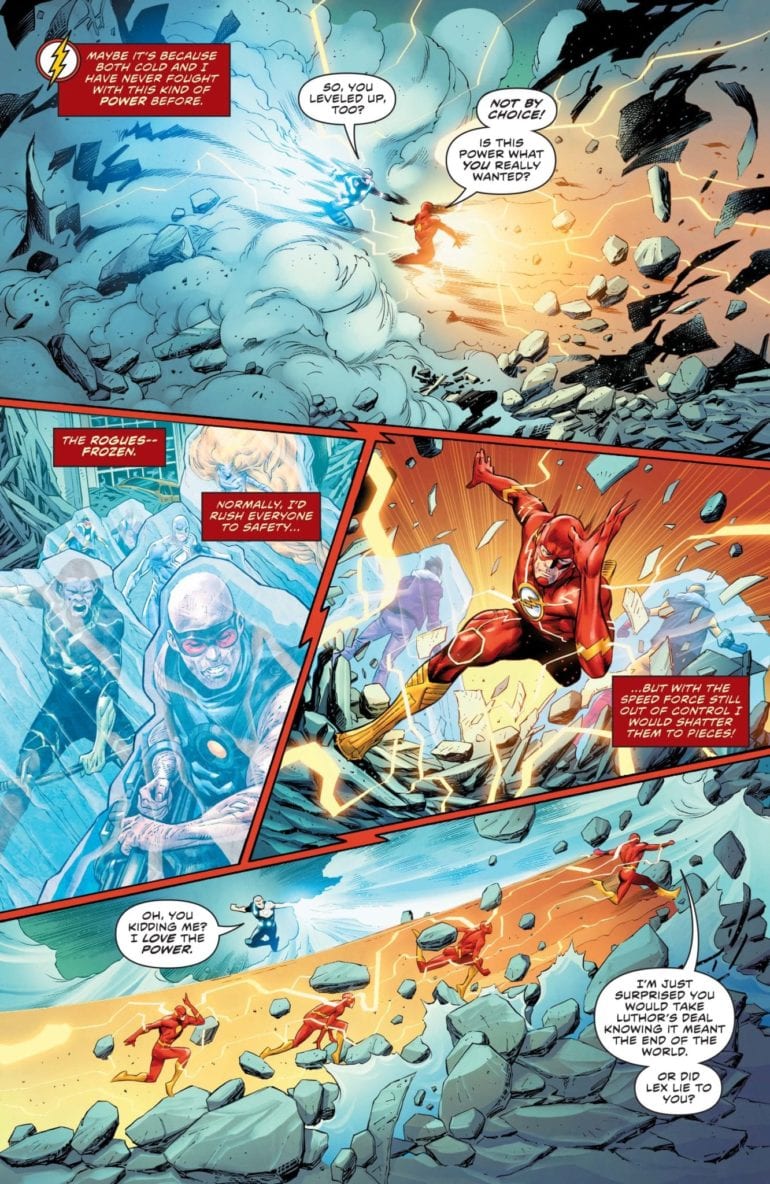 With the Rogues’ Reign coming to a close, we look to the future, and it appears grim, and I’m excited. Despite our leads acting a bit off, the overall story was an excellent action-packed conclusion with great character moments. The art team brings down the house with epic illustrations and vibrant colors, giving a feast for the eyes. We may have returned to the regular world, but we are given an ending that shakes the status quo of the Flash. We just have to wait and see how long this status will stay and if it’s for the better.

The conclusion to Rogues' Reign shakes up The Flash status quo, for better or worse.Review: THE FLASH #86 Sees The Fall of Cold and Barry