Review: THE FLASH #79 Struggles to Focus on One Story

The Flash has Foes on Several Fronts.

The Speed Force is dying. With the new forces making their way into the main DC Earth, Flash and his fellow speedsters have been slowing down. To fight this, the Speed Force unleashes its most dangerous avatar, Black Flash, to kill the other forces avatars. Barry gathers the four together, but Psych, the avatar of the Sage Force panics and runs for it. Barry takes Fuerza and Steadfast, the avatars of the Strength and Still Forces respectfully, back to the Speed Lab in the Flash Museum for safety. When he tries to go after Psych, Black Flash beats Barry to him and kills the Sage Force user. Can the Flash save the others from their fates? 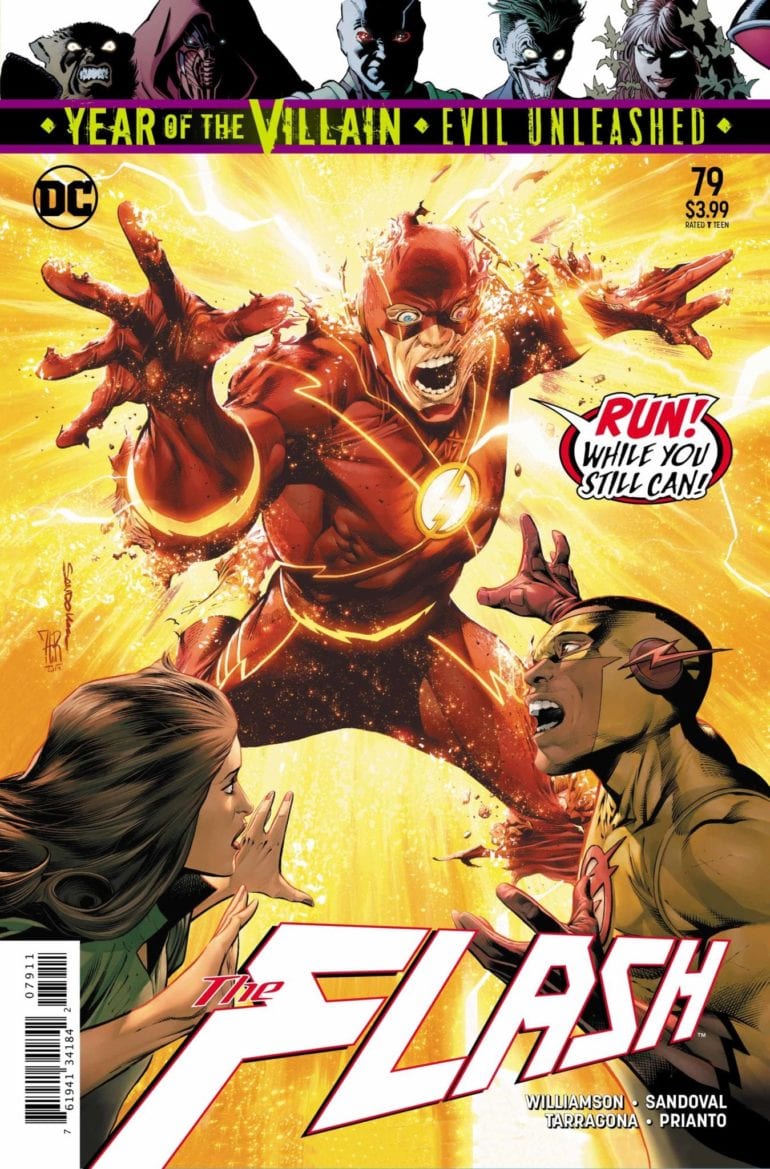 At the Flash Museum, Fuerza demands to be released, but Commander Cold refuses. This causes her to demand the location of Barry, who arrives in that same moment with Psych’s body. Fuerza scolds the Speedster, but the rest of the group realizes Barry is becoming faster. When the Black Flash killed Psych, it uncoupled the Sage Force from the Speed Force.

Meanwhile, the revitalized Rogues go to find the final member: Lisa Snart, the Golden Glider. She runs an ice rink for abused youths, but her brother is able to convince her to return to crime. Soon after they make their move, a certain pair of young speedsters make it their business to go after them. 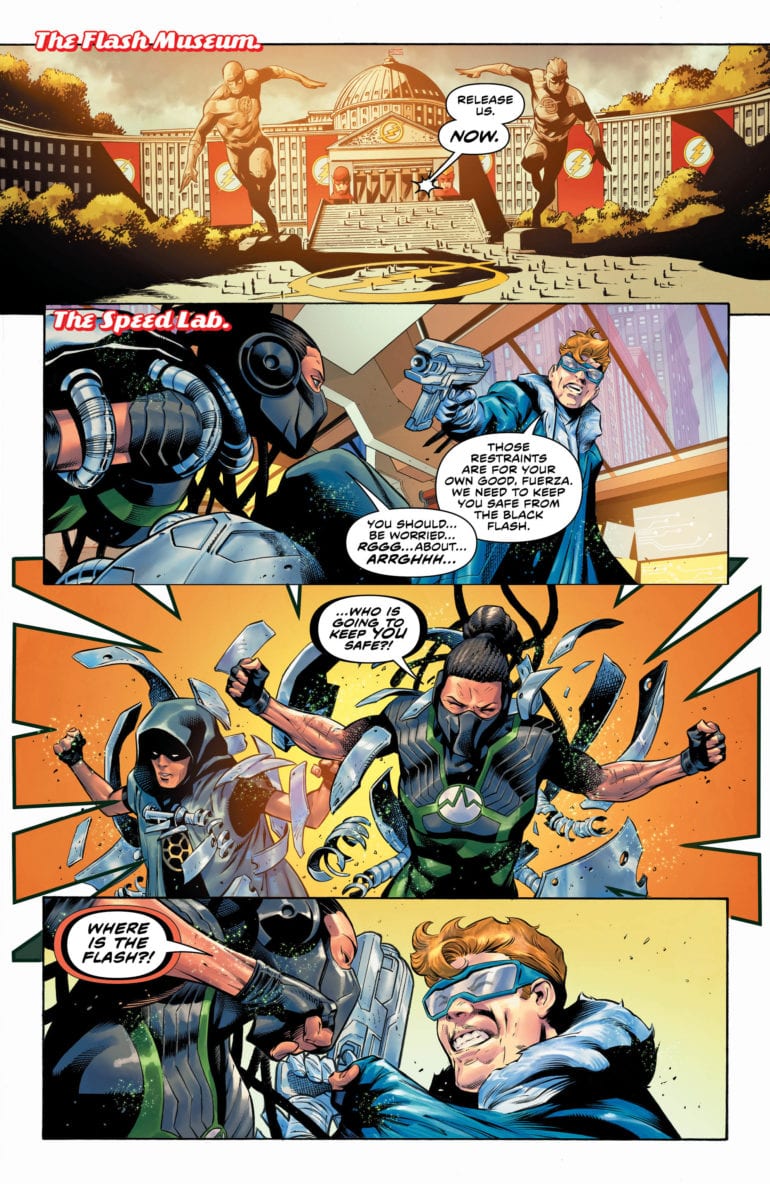 The focus of this story is, unfortunately all over the place. While the previous issues have been focused on this Black Flash threat, that has begun to be pushed into the background. Due to the Year of the Villain, more focus has been put on the Rogues in preparation for their next arc. We’re still in the middle of this one, and it treats the Black Flash as if he didn’t just murder another force avatar! This should have been treated as a big deal, as the stakes have never been higher, but it comes off as a forgotten plot point.

There’s also not a lot of action to keep even the common reader entertained. This was trying to be one of those character development issues, as seen with Golden Glider. While I enjoyed the new life she has, growing as a character and being seen as more kindhearted, I am not a fan of how quickly she threw it away. This could have been a beautiful send-off for the character, especially with her new line of work. Instead, it’s tossed off to set up for the future. It feels like a wasted opportunity, and I can only hope it pays off. 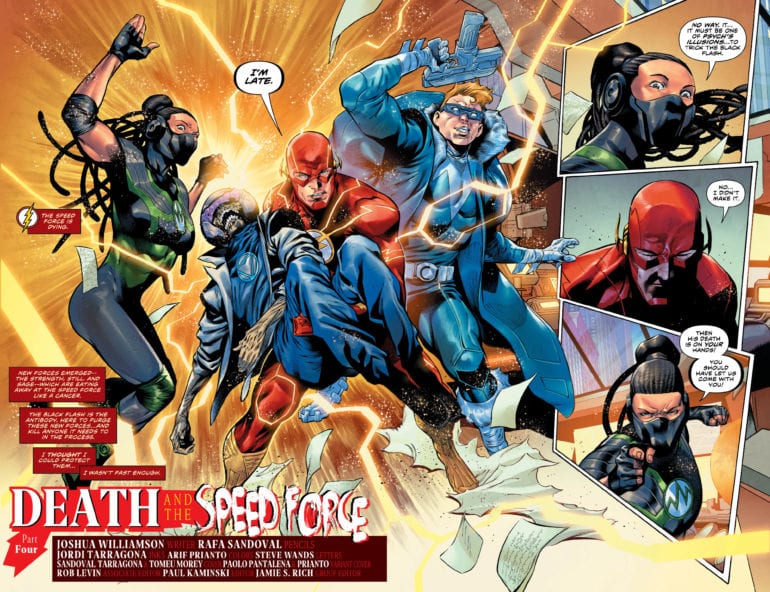 While I may have issues with the story, the art is a positive that continues to hold the book together. Rafa Sandoval’s art is just breathtaking, especially in the designs of the characters. One of the best looking parts is a reveal of another player in this story. While I won’t reveal who it is, but he looks amazing in Sandoval’s style. Arif Prianto takes that style to the next level with great colorwork. This team has worked hard to make this arc look great, and the effort certainly shows.

While beautiful to look at, this chapter to the Death of the Speed Force arc falls flat. It focuses more on the Year of the Villain than it does the already exciting storyline. I don’t think the next arc will be bad, but it’s causing the current one to go off the rails. With the team of Rogues back together, it should straighten itself out, but there is worry. This needs to focus on the Black Flash threat, not the threat to come.

Review: THE FLASH #79 Struggles to Focus on One StoryWhile a great looking comic, the focus of the story is beginning to falter, choosing to prepare for Flash's Year of the Villain story.