Review: THE FLASH #760 Sees the Return of Several Speedsters

The Battle for the Soul of The Flash

Barry Allen is no longer in control of his actions. Eobard Thawne has taken his body in an attempt to take the mantle of The Flash. Barry is stuck in the Speed Force with Jesse Quick and Max Mercury, which work with him on trying to retake his body. As Eobard works as the Scarlet Speedster, Bart Allen pieces the truth together and warns Kid Flash and Avery Ho. With the speedster of the future furious, he attempts to murder the three children. He is stopped, however, by the return of Jay Garrick, the Flash of the Golden Age. Will Barry get out before his body is used for evil? As Barry learns about the speed force from Max and Jesse, Jay holds the line against Thawne. The Flash of the Golden Age does his best, but Thawne ends up being too much. Before he can deliver the final blow, Barry tries vibrating free, causing Thawne to flee. Meanwhile, the Legion of Zoom continues on their crime spree of Central City. They head to the final target, only to learn that it’s Nora Allen’s Grave. Thawne arrives, explaining that if he wants to stay in The Flash’s body, he needs to absorb the chrono-energy from her corpse. 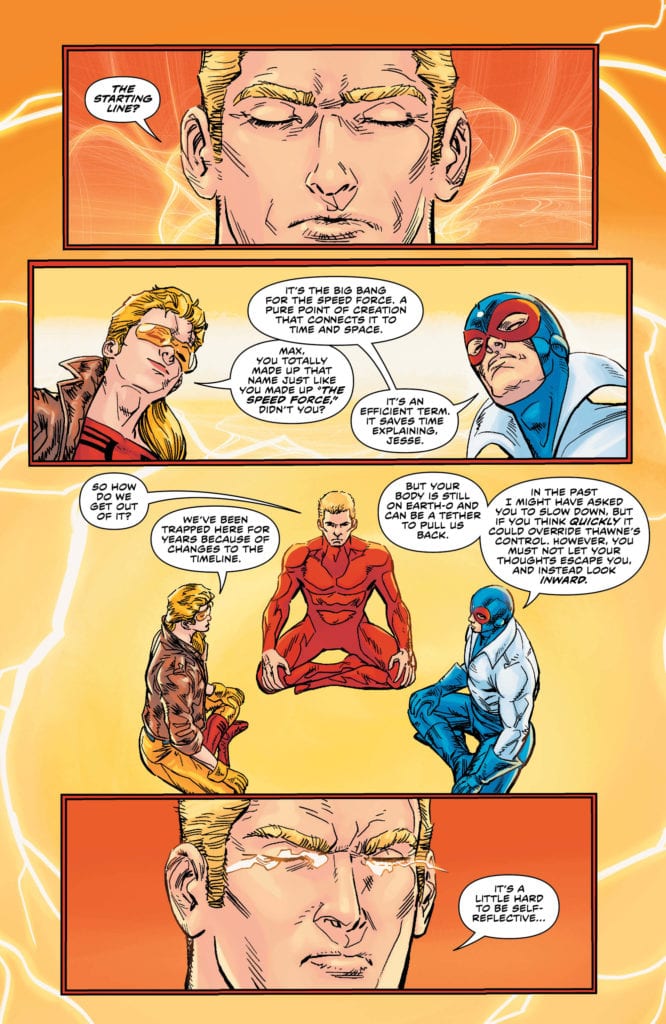 The story in this issue can be best described as all Flash, little substance. Pun aside, there are great moments during this story. Williamson appears to try and tie the old and new together as his story comes to a close. The return of the pre-New 52 speedsters uniting with the speedsters of Rebirth is a great way to end the run. Max and Jesse working alongside Barry from within the Speed Force, makes sense and is a great way to honor the past. Even the cameo of an old Flash villain brought a smile to my face. Each speedster gets a moment to shine, and it helps the book.

The problem with the issue is that while the returns are a significant impact for long time fans, for those who just hopped on during Rebirth, it’s not. It’s very cool to be sure, but there hasn’t been one reference to Max Mercury or Jesse Quick in the entirety of Williamson’s run. If there were more references to the past in other stories, this could have been so much better. As it stands, these last-minute reveals stop a good story from becoming great. 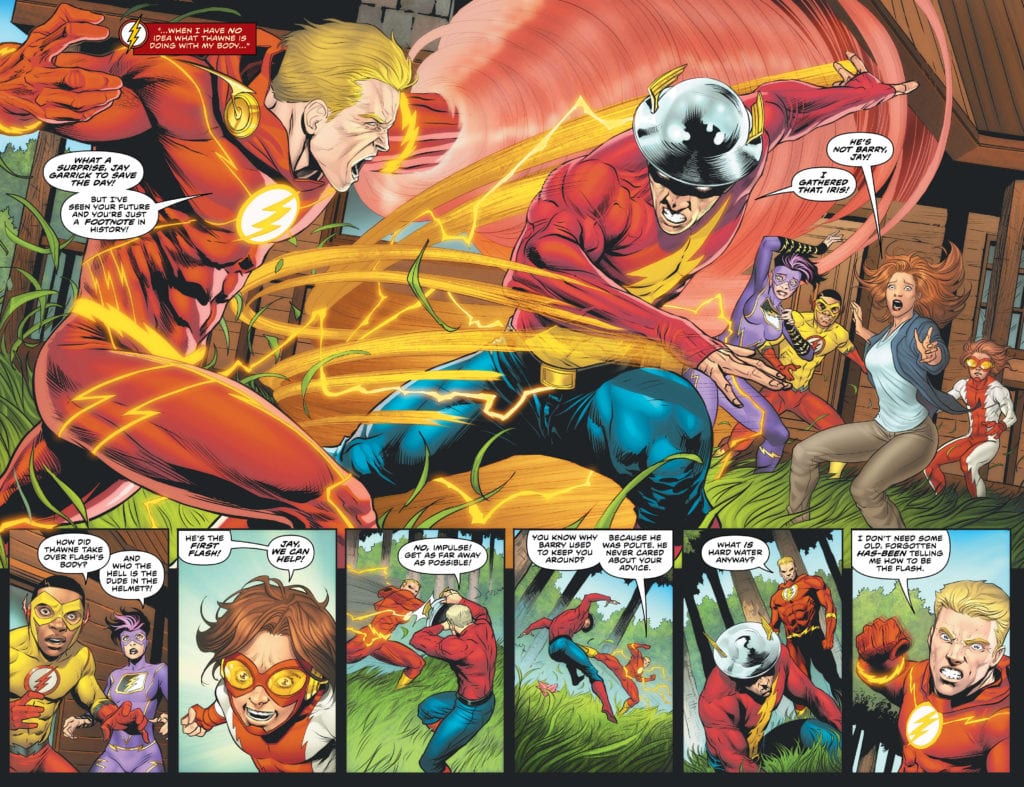 Christian Duce takes the place of Rafa Sandoval this time around and knocks it out of the park. As I’ve mentioned in his previous works, he excels in showing how the powers work. He adds details that some will miss on the first read-through, but if one were to look closer, provide realism. The best example would be the blurred lines on The Flash when Barry tries to take back over. It shows off the vibrational disharmony between the speedsters and could have easily been missed. Scott Kolins does excellent work in the Speed Force section as well, providing a great slower moment between an old enemy and Barry. Throw in the fantastic colorwork of Hi-Fi and Luis Guerrero, and we have ourselves one beautiful issue.

Overall this issue was good but had the potential to be better. The return of the past speedsters may feel hollow, but there are some spots that hit the feels hard. The art team does a fantastic job of bringing the story to life. As we edge closer and closer to the end, the entire landscape has changed for the next creative team. This reviewer is personally excited to see what changes Williamson has left for us.

This chapter of The Flash saw exciting returns that needed to be built up better.Review: THE FLASH #760 Sees the Return of Several Speedsters