Eobard Thawne is The Flash!

Barry Allen is gone, long live The Flash. After Barry finds the location of the Legion of Zoom, the supervillain team overpowers him. As each member takes their time providing the appropriate amount of pain, Eobard reveals his real plan: Take Barry’s Place. Using his speed phasing, Thawne becomes one with the Flash, taking over his body. This sends Barry to The Speed Force, where he reunites with Jesse Quick and Max Mercury. The problem is they want him dead as they have become zombies. As we enter the final arc for Williamson’s run, Barry and Thawne are in the most precarious position either has ever been in. Will either survive? 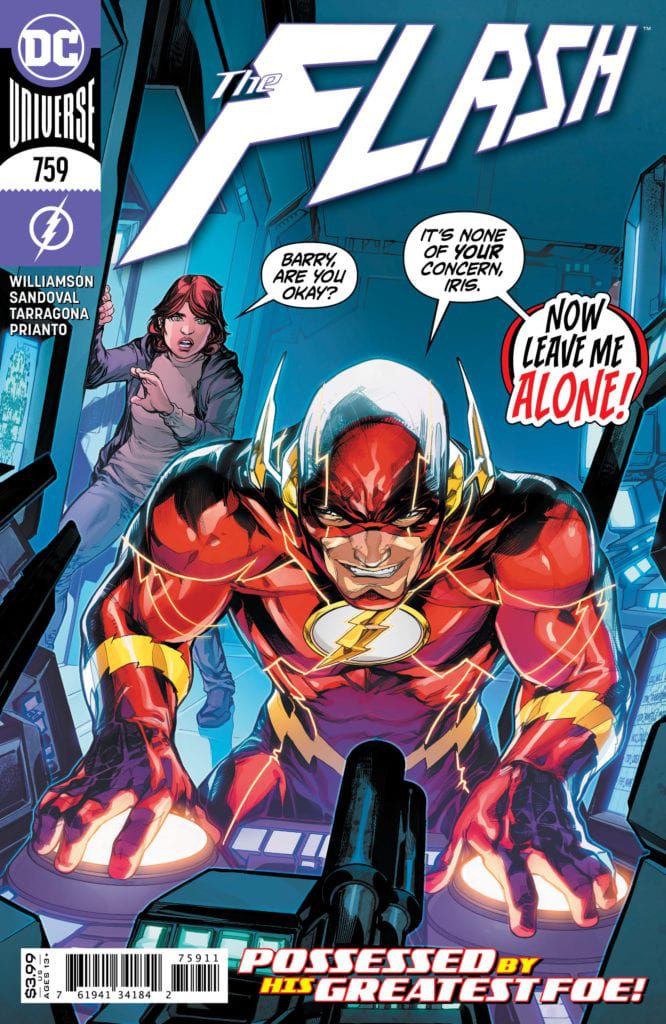 We open with Thawne playing the part of The Flash a bit too well. He does the heroic things Barry has done over the years, but more quickly and precisely. In between crimes, Thawne goes to find Impulse and offers a team-up. The speedster pair run back to Central City to find the Rogues robbing a bank. They dispatch them quickly, but Thawne becomes a bit brutal with Trickster. Despite looking like his grandfather, Impulse begins to question the identity of The Flash. Meanwhile, Barry is touched by the zombie speedsters, remembering who they are and return them to their original looks. Max tells Barry what has happened and proceeds to help him learn about the speed force. 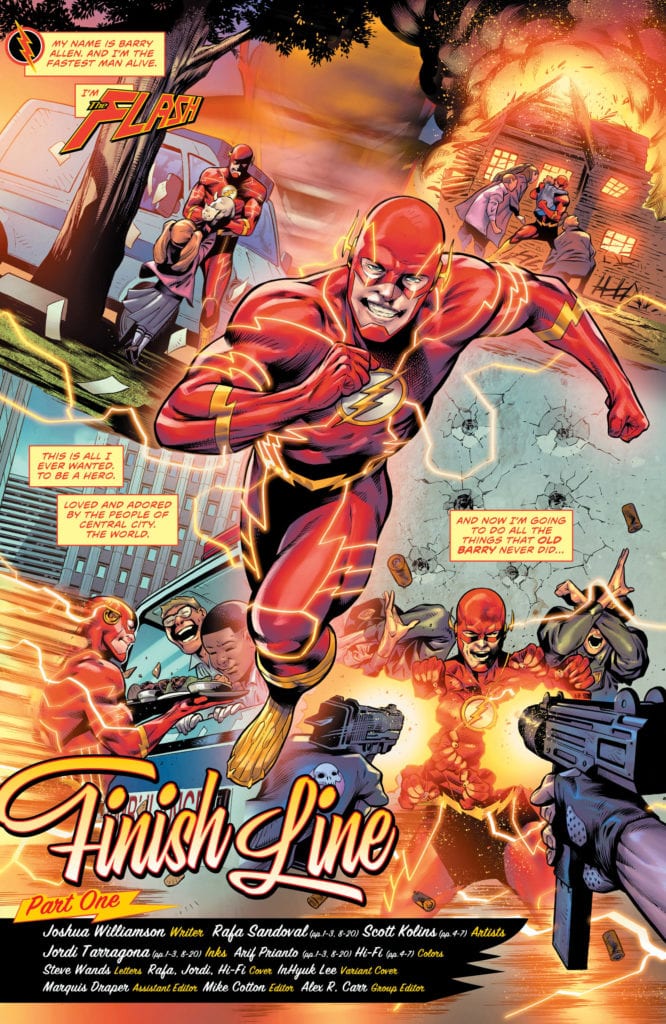 This issue basically flew by at a breakneck speed, which can be seen as a good or bad thing. On the negative side, one could say that the suspense of the heroes not learning about the possession could have made for great storytelling. Something akin to Superior Spider-Man, where the heroes could have pieced it together over the course of the arc. This, however, is impossible due to how few issues we have left in the run. It’s just a missed opportunity that could have made a great build-up.

That being said, seeing the blocks of a Flash Family reunion being moved into place always puts a smile on my face. With Impulse trying to unite everyone against his fake grandfather, we get the team-up that’s been missing in the Flash series. This is the final story of Williamson’s run and if there is any aspect that has been covered well by him, it’s the Flash Family. With the return of Jesse, Max, Impulse, and one surprising return character, this arc will bring the run to an epic close. 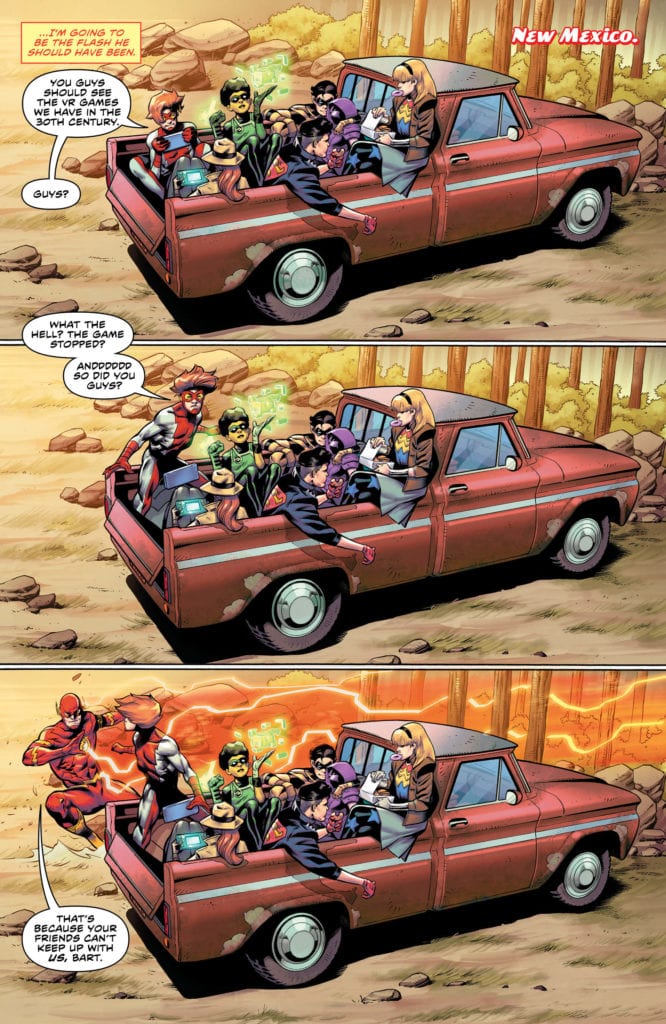 We have two long time Flash illustrators covering the action in the real world and in the speed force. The Speed Force section is covered by Scott Kolins, whose style complements the creepy looks of the zombified speedsters. He also does well in honoring their original looks when changed back. Rafa Sandoval takes over the real world section and provides us with cool-looking action and subtle details that make our favorite speedster menacing. The best look in the book comes from Impulse attacking Thawne. Due to Rafa’s style, we can practically feel the high-speed kick to the face the speedster of the future delivers. Both artists are perfect for this final story and I can’t wait to see what else they have up their sleeves. 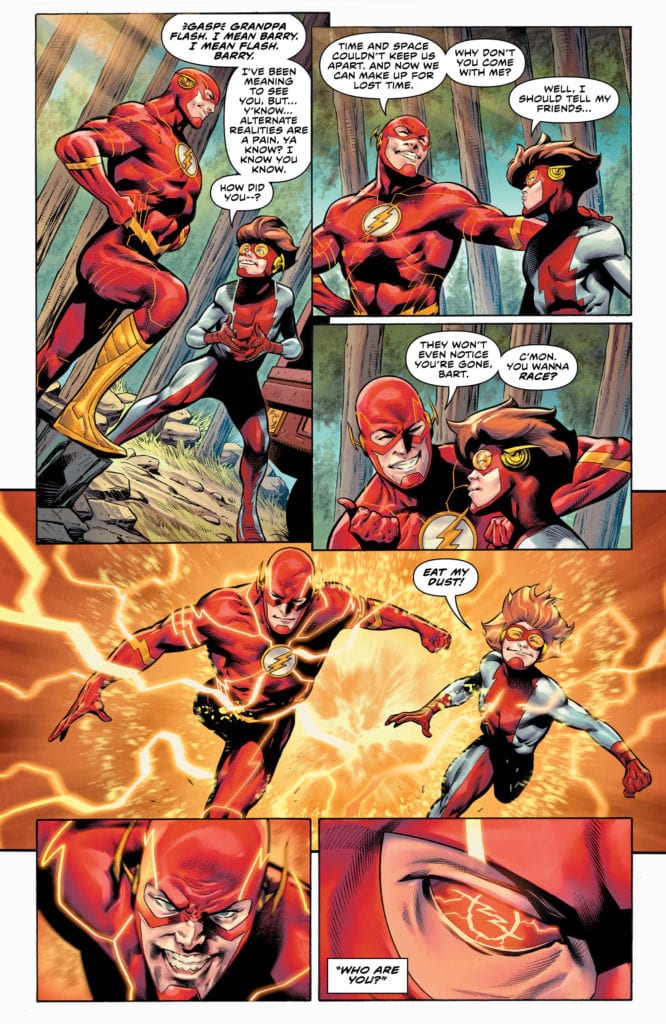 While there could have been more built around taking Barry’s identity, this was still a great issue. All the pieces are set for this nailbiting conclusion to one of the longest creative runs of the Rebirth Era of DC. The art team is able to provide an excellent look for the two realities this story takes place in, as well as fantastic looking action. The Flash and Thawne will face off one last time, and this reviewer can’t wait to see it.

The final arc of Williamson's Flash run starts with a bang and fantastic art.Review: Eobard Thawne Takes Barry's Identity in THE FLASH #759