Review: Barry Face Godspeed and Paradox in THE FLASH #751

The Flash Faces Paradox for the Future

The Flash has a special place in the Multiverse and the DC timeline. Along with being the hope of Central City, his abilities shape the Multiverse through the crises. This has gotten the attention and fury of Paradox. This former scientist learned of the Multiverse after Barry’s battle with Turtle during Year One sent him to another dimension. After spending years in there, he was trapped in the future. Godspeed would eventually become his avatar, and the pair returned to the present to face their mutual enemy. Can The Flash stand a chance against these threats from the future? 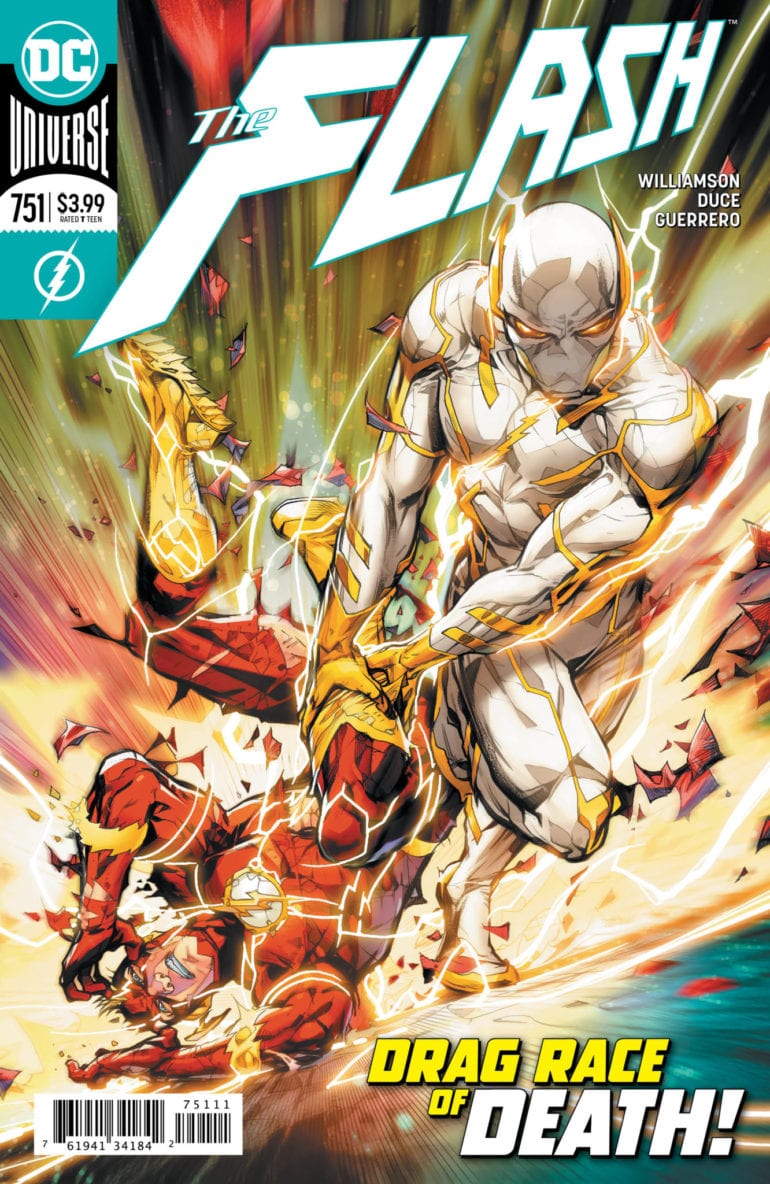 We open with Godspeed beating on Barry for his new master, Paradox. The new villain has told him that the Flash is truly a scourge of the Multiverse and must be killed. Soon it is revealed that Godspeed is a double agent, hoping to take down Paradox. Before the speedsters can team up, however, the future threat beats them both. Iris can only watch from within the Speed Lab as she uncovers an AI left behind by the late Commander Cold. Using the databases held within, Iris learns only one man defeated Paradox: Reverse Flash. 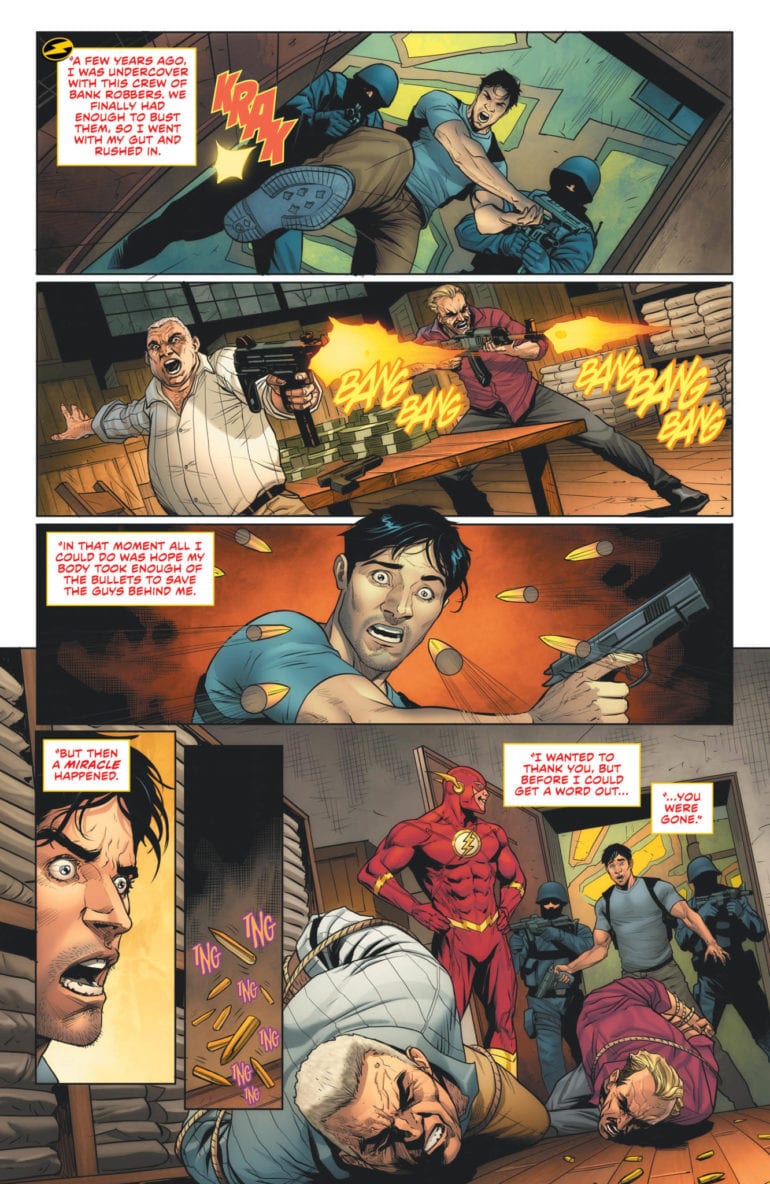 This issue has a problem with reliving the past. A large part of the issue is giving readers background on Godspeed. While this might be good for newcomers, for long time readers, it’s seen as a bit of a waste of time. We know about Godspeed and want to know what Paradox’s plan is. We get it in the end, but it feels like we took the scenic route down memory lane. For a story that has many effects on the future, this story has been focusing a little too much on the past.

That being said, the twist of Godspeed turning on Paradox was a pleasant surprise. It’s nice to see the character changing for the better.  In older stories, he would have been just the herald of Paradox and be done with it. Due to his connection and constant return, we were able to see Godspeed change throughout the series. He has gone from being the supervillain that started the Rebirth era to a Red Hood of the Flash Family. 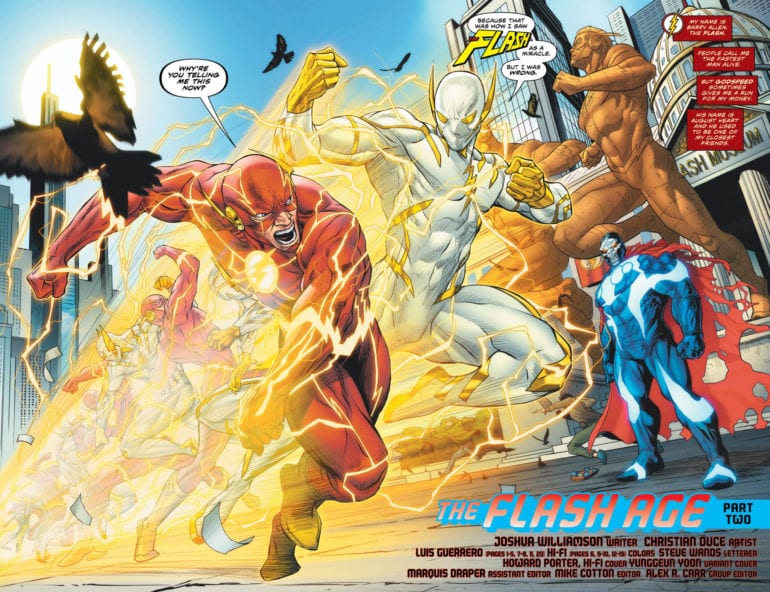 This time around, Christian Duce returns as illustrator for the Flash. His style has always been a favorite of mine, and he brings his A-game for this story. Duce is able to provide both epic-looking action and a heart-tugging beautiful ending. Even his design for the menacing Paradox is amazing and only gets me more drawn in.

Hi-Fi and Luis Guerrero share the weight for colorwork. Together, they provide a vibrant palette for readers to enjoy. The characters pop off the page with every battle, and every use of their powers pulls us right in. Alone, they have blown us away, but together they thrive. 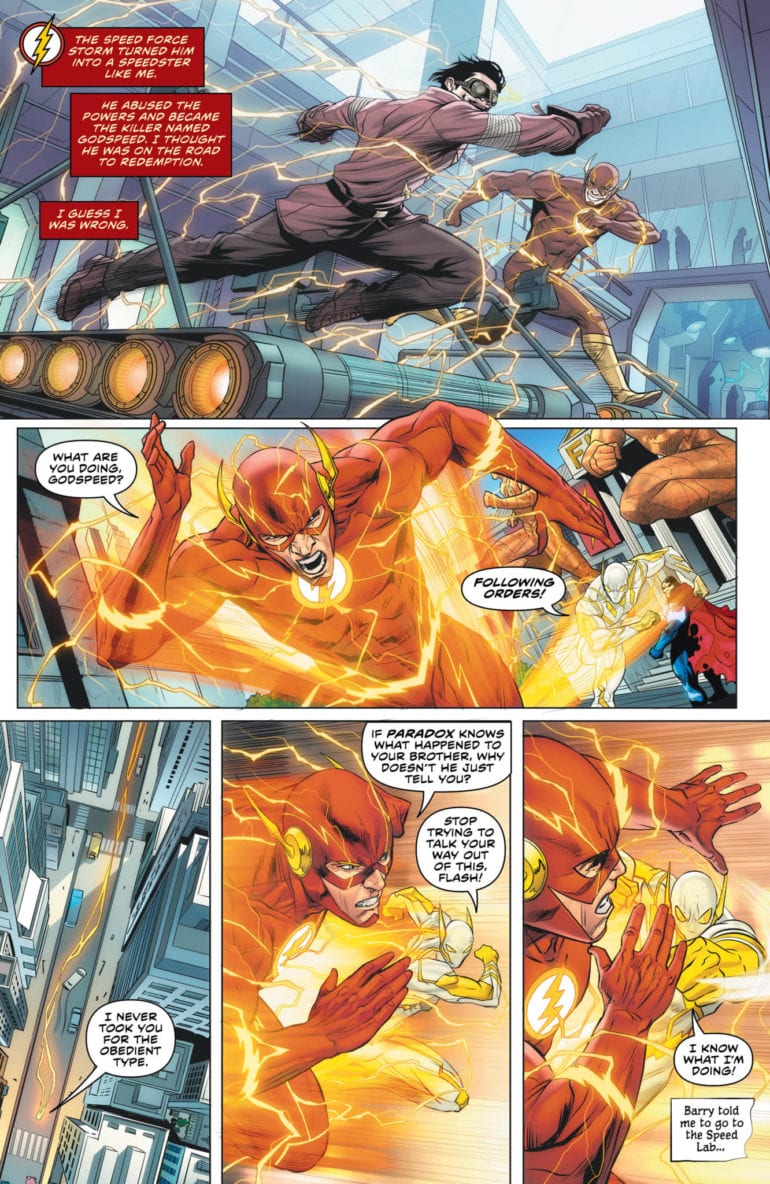 The Flash Age still shows promise, but it still needs work. The last two issues have had a problem looking back at the series thus far. While it’s okay to reflect on the past, especially with the topic of Barry Allen’s legacy. The problem is the story relies too heavily on it instead of moving forward. The action in the present was exhilarating and had this reader on the edge of his seat. The art team brings their best to the front as this is one of the best-looking comics on the shelves. As we get further into the arc, I have no doubt we’ll find a proper story balance of past and present. Until then, we just have a pretty middle of the road comic.

Review: Barry Face Godspeed and Paradox in THE FLASH #751The Flash Age continues but struggles to look past previous arcs.