Review: THE FLASH #750 Celebrates the Character Through Stories

Eighty years ago, comics introduced the fastest man alive, The Flash. While it may not have started as Barry Allen, the Scarlet Speedster has been one of DC’s cornerstones in history. Now we reach issue 750, which might not be an accurate number, but still impressive nonetheless. It’s been an epic ride so far, but this run certainly has been a rough one.

The Flash has been at a crossroads since the end of Rogues’ Reign. His powers have grown out of control, and he nearly killed Captain Cold. After freeing the city from Cold, Barry meets with Pied Piper to help. While he can’t fix him, the ex-Rogue is able to stabilize Flash enough to allow him to continue being a hero. When Barry returns home, his future self arrives and warns him of the villain Paradox before disintegrating. Is the fastest man alive prepared for this new threat? 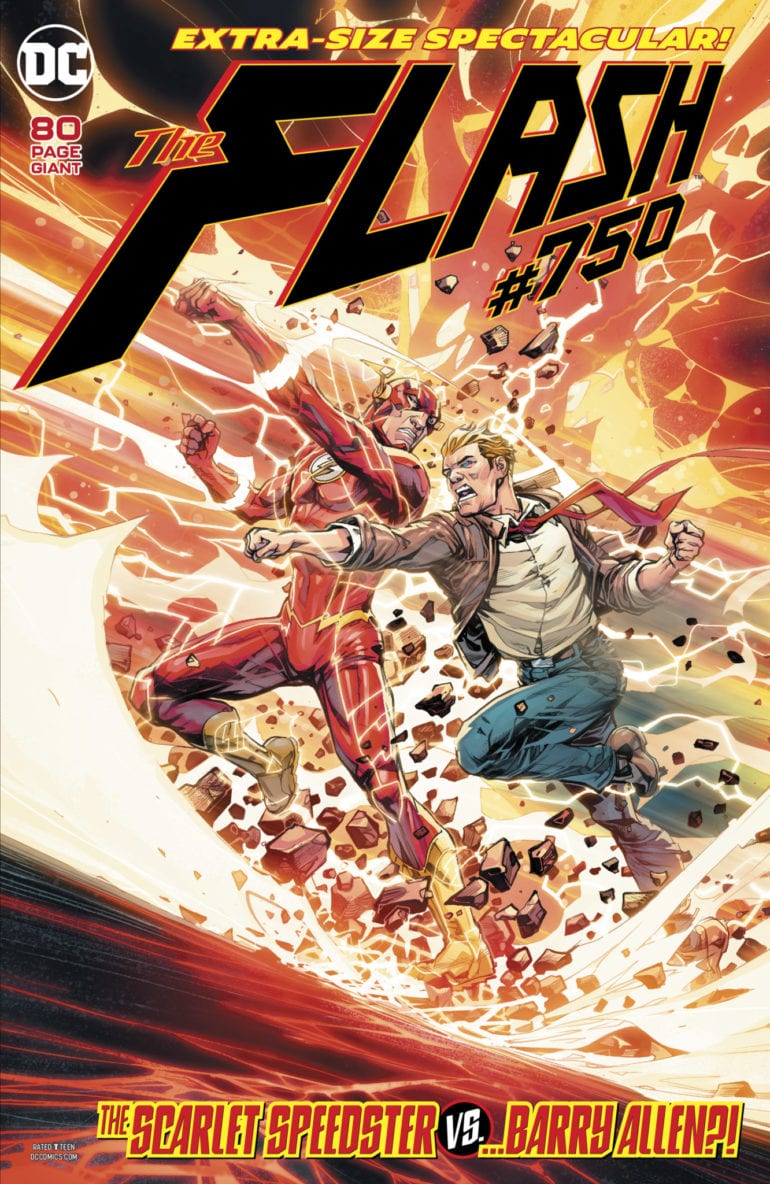 The Flash Age begins with the citizens of Central city talking about their hero. From reformed criminals to students at school, it’s clear that Barry Allen’s heroic alter ego has made a change. These stories are being gathered by Iris, who wants to publish an article about the Flash. Barry, however, has been doubting himself as of late with all that has happened during Rogues Reign. Iris admits she made this story to remind him that he is the hope of the city and does so much for the people. Before he can get too comfortable, the pair are visited by Godspeed, who challenges Flash once more. 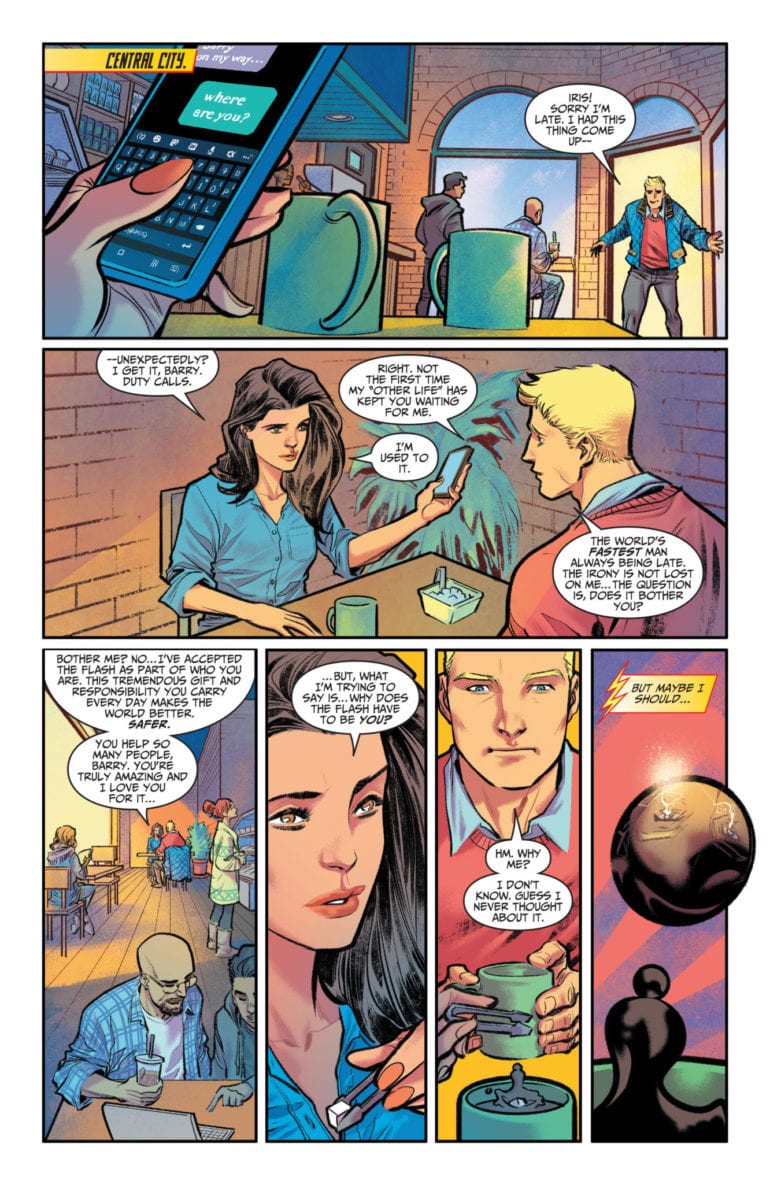 So there will be people who hate the opening chapter of The Flash Age due to its treading old ground. It recaps the past few arcs, including Flash War and The birth of the other Forces. Honestly, I forgot it was a part of it until the last three pages when Godspeed arrived with Paradox. Truth is this story felt more like a celebration of what made the character of Barry Allen enjoyable.  This shouldn’t be seen as a study of the series but a study of the character himself.

As for the other stories in the book, we have a mixed bag. While some were able to bring a smile to my face, others fell flat. One of the standouts was a Jay Garrick Flash tale. We see him face the Thinker before leaving us a tease of his return later this year. One of the mediocre ones come in the form of a Flash against Mirror Master story, full of references to the silver age. While it isn’t one of my personal favorite, the variety of stories will impress a wide range of readers. 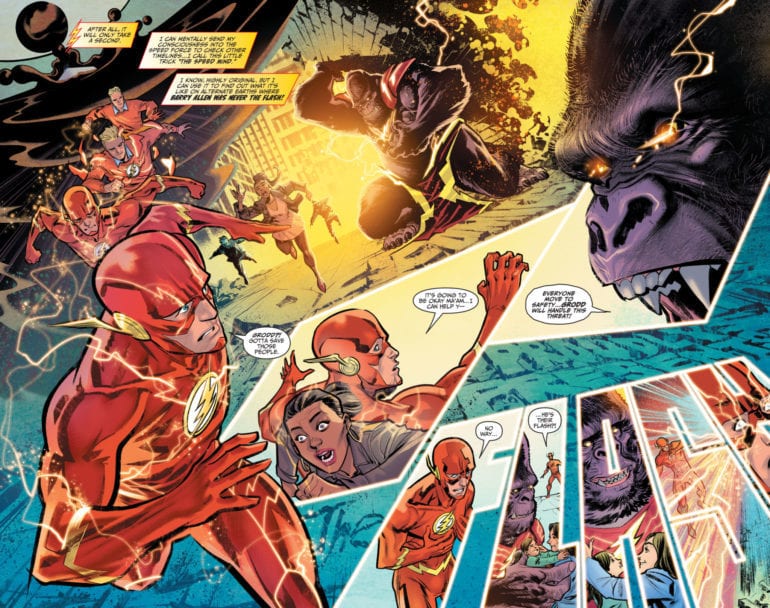 With this issue being as massive as it is, we got a large array of art teams to help bring the tales to life. For The Flash Age, we have Rafa Sandoval returning, and he brings his A-Game. He had always done a spectacular job in working on the Scarlet Speedster and his powers, and here is no different. The brief battle between Godspeed and Flash is still plenty to excite as we head into the rest of the arc.

Other standout art teams are David Marquez and Alejandro Sanchez with their Jay Garrick story and Francis Manapul. Both stories have exceptional art with memorable moments that stay with readers days after reading it. Overall, it’s just a good looking comic! 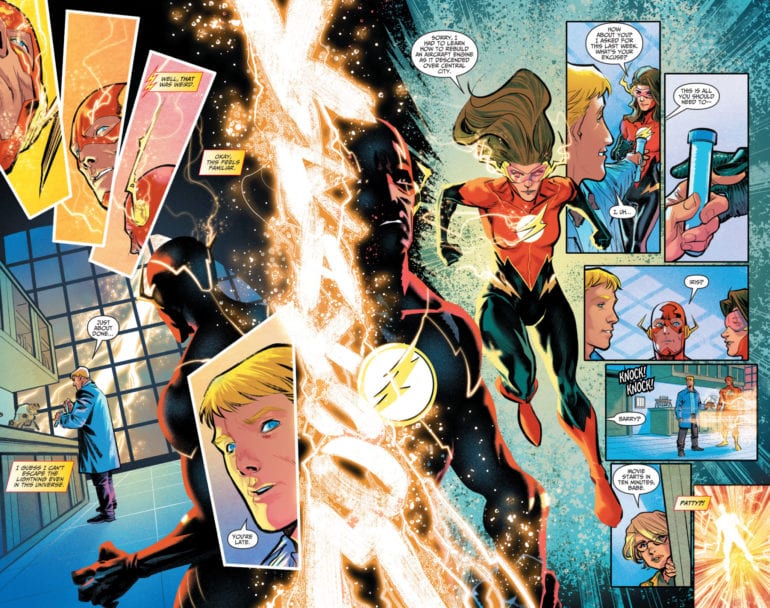 The Flash has just turned 80, and this comic does a pretty good job of honoring the character. There are stories for every type of reader. The main story isn’t perfect due to it mostly being a recap of the current series, but considering what this issue is, it fits. From the slow-paced character pieces to action-packed romps, this comic will bring delight to any fan of the fastest man alive.

Review: THE FLASH #750 Celebrates the Character Through StoriesThe Flash #750 is a huge comic full of stories for a wide variety of readers.