Review: Barry’s Origin Comes to an Exciting Conclusion in THE FLASH #75

The Flash Year One Comes to an Exciting Conclusion!

Year One of the Flash has been quite eventful. After getting his powers, Barry traveled to the future and saw his city under the control of a metahuman named King Turtle. He went back and found the present version of Turtle and took him down. Since then, The Flash has worked to save the city and work on his relationship with Iris.

Before he can get too relaxed, however, King Turtle arrives from the future and begins to invade. Barry grabs his new suit and prepares to face off with the King. Unfortunately for him, the future villain releases his younger self to team up against Barry. How can the Flash take on two Turtles? 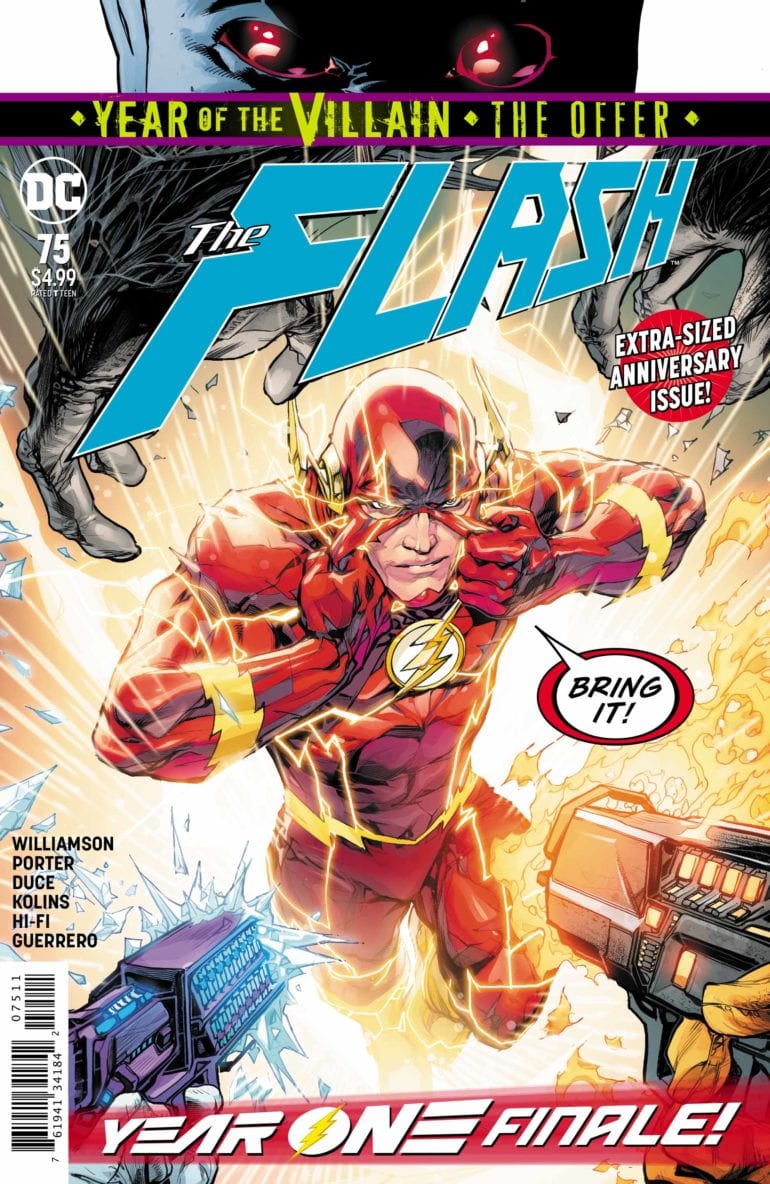 Picking up from right where we left off, Flash does more dodging than he does fighting the Turtles. The people of Central City see the speedster fight, and after seeing a chance, they swarm the base to help. Even Iris joins in on the fight freeing a few of the civilians before facing the present Turtle. Flash builds up speed and tries to go at King Turtle, but the villain blasts him with the Still Force. As he feels the Still affecting him, Barry pulls on the energy of the Speed Force to overpower it. Flash can trap the Still Force in the present, stopping the future kingdom of King Turtle from coming to pass. 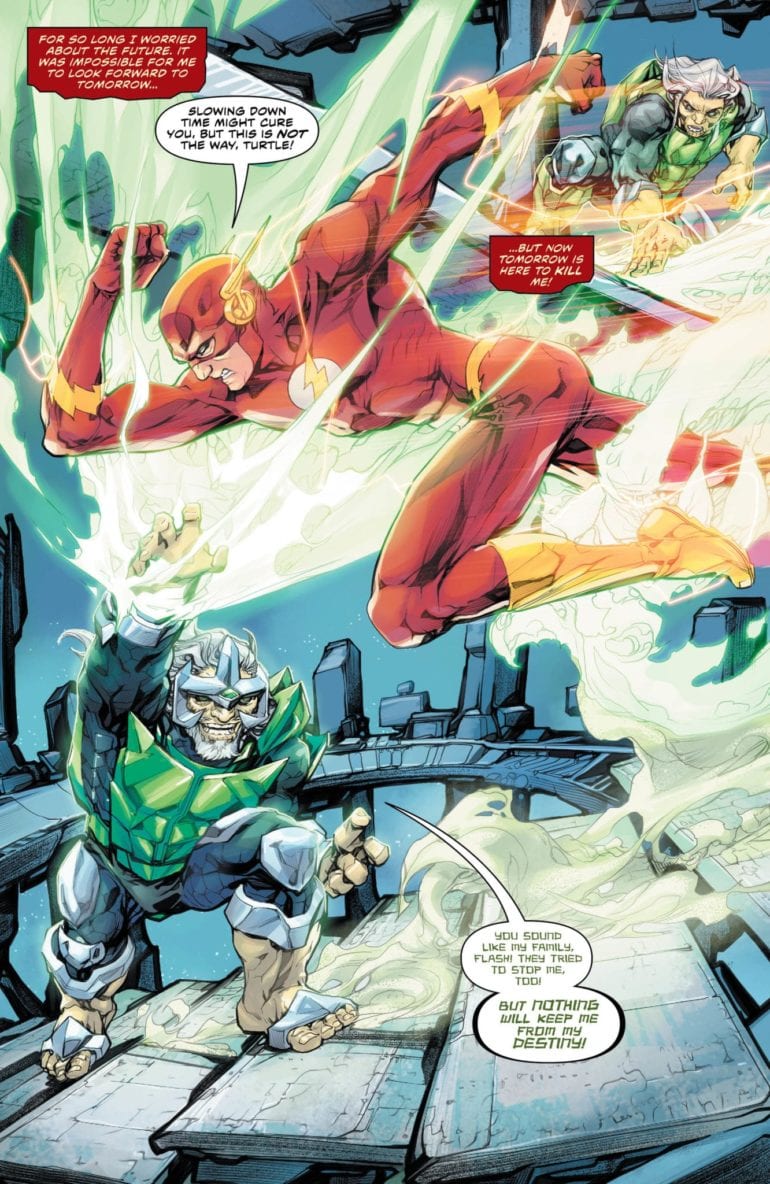 This is your standard ending to an origin story arc. The villain is defeated, the hero learns what’s most important to him, and the future is hinted at being a bright one. This, however, doesn’t make it a bad issue by any means. The action is excellent, and watching the impact Flash has had on Central City is a bit heartwarming. I know cities support their heroes, but since day one, Central City supported Barry. This is another example of how this arc shows us what made Flash the way he is. From Iris’ impact to the city’s support, Year One nailed the origin of the fastest man alive.

The story also has not one but two epilogues. While one is a perfect way to end the arc, as well as several arcs in the series so far, the other, however, is just another tie-in to the Year of the Villain. It isn’t necessary, but it’s perfectly harmless. 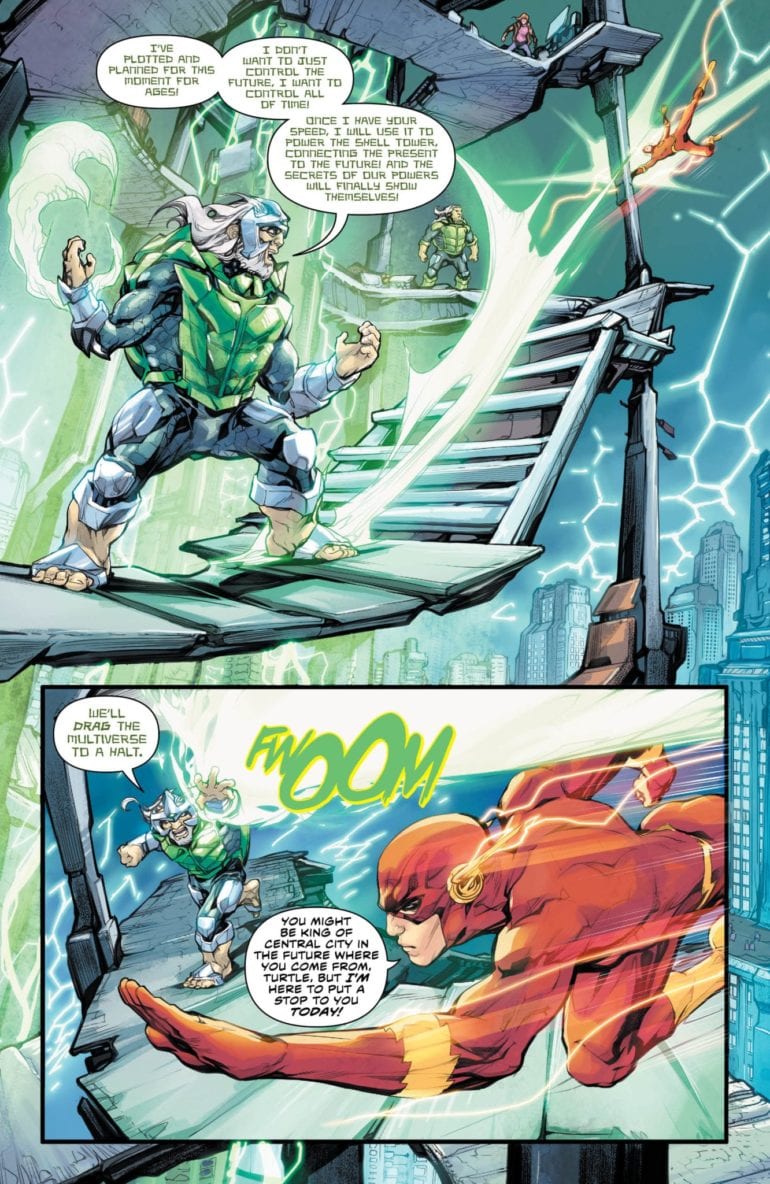 Howard Porter concludes the arc strong with some of his best work. He can catch the best parts of the Flash and his powers with every page. Near the end of the issue is a two-page spread of the entire Flash family, both of the current continuity and pre-new 52. It could be this reviewer’s favorite page in the whole series.

The only downside is that Porter only does the art for the main story. Scott Kolins returns for the first epilogue, which is sadly a miss for me. It’s not terrible, but its certainly a downgrade. That said, the Year of the Villain epilogue, covered by Christian Duce, was fantastic and left the art on a high note. Overall, this comic looks wonderful, helping the arc stick the landing. 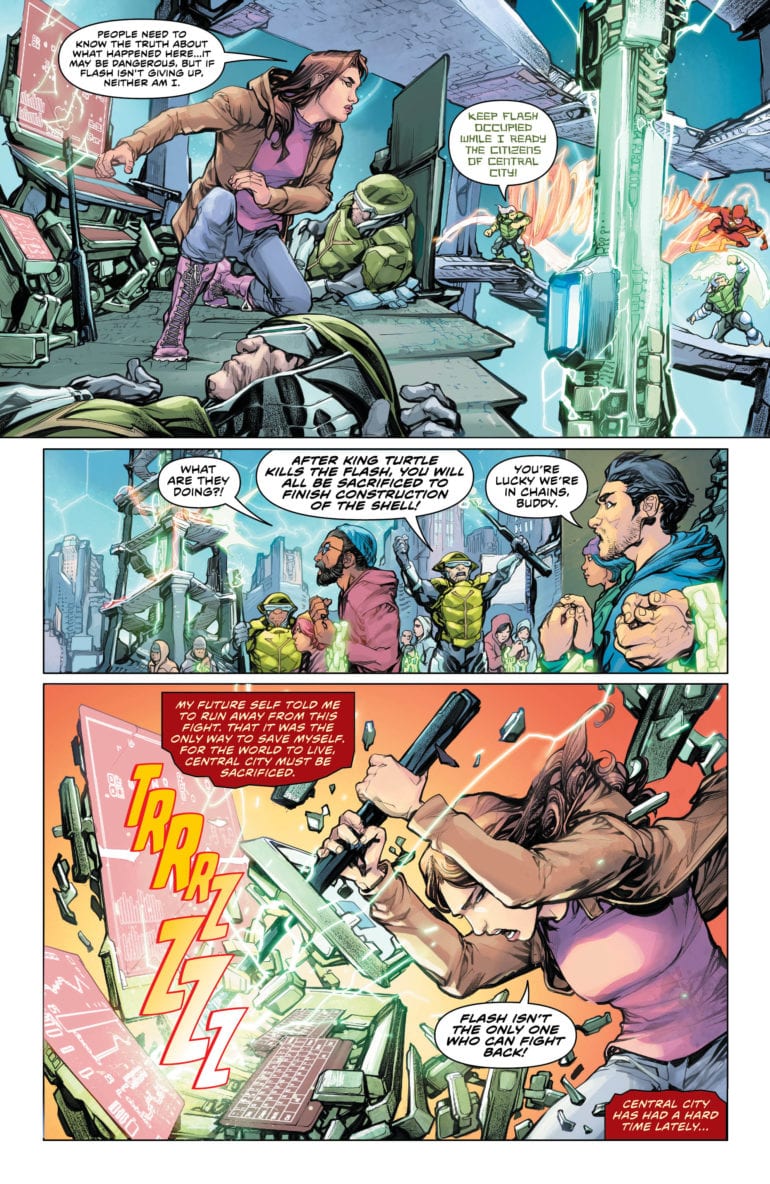 Year One has ended, and it went out on a high note. The story was top notch, showing the readers the true heart of the Flash in an epic way. The art of Porter had always been great for this arc, and it succeeded here. Year One as a whole was a bit shaky at the beginning with treading familiar ground, but it was able to make a name for itself by being a stand-alone story that shows newcomers what makes Barry a hero. This arc succeeded and here’s hoping the future can be just as bright.

Review: Barry's Origin Comes to an Exciting Conclusion in THE FLASH #75The Flash Year One concludes in spectacular fashion!